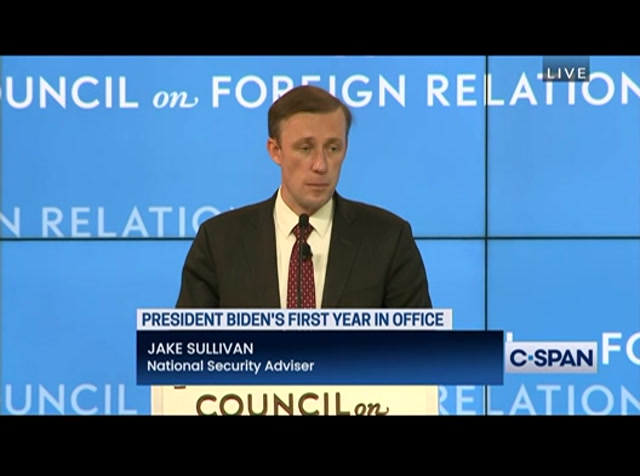 EDITOR’S NOTE: We have been commenting on this particular issue for a very long time. Here are a few points to keep in mind: 1) At the time of the fall of Communism the West had promised Soviet leaders (through NATO and by statements of prominent western political leaders) that there will be no expansion eastwards.  Unfortunately, these statements were only verbal – but well documented.  None of the promises were kept. 2) Now what Putin demands – and he will get it eventually – is a written legal document that will safeguard Russian vital “security space” (Ukraine, Belarus, Georgia, etc.).  3) More importantly, if the US wants to be successful against China they has to make a deal with Russia… History has proven that point over and over during the last 110 years… 4) A note to our misguided Constantinople Patriarchate: do you really think that as Putin secures Eastern Ukraine, he will leave unprotected the Orthodox faithful of the rest of Ukraine? He will certainly not – and this will be the end of your fallacy with “cacocephaly” there….

National Security Advisor Jake Sullivan: The US Remains “Prepared For Dialogue With Russia”

National security advisor Jake Sullivan spoke Friday at the Council on Foreign Relations, primarily on challenges facing the United States from China and Russia with regard to Taiwan and Ukraine.

About speculation that Russian president Vladimir Putin is planning an invasion of Eastern Ukraine, Sullivan said: “The current assessment of the U.S. government is that he has not yet made a decision so no change from last week to this week in that regard.”

The president has taken off the table the idea of a direct U.S. military response in Ukraine. And the emphasis has been on sanctions [against Russia] and support for Ukraine…

What can you say about the diplomatic side? Essentially, the Russians as we read in the paper today, have said that they don’t simply want Ukraine out of NATO but they want NATO out of much of Eastern Europe. What is our sense of the conversation we’re prepared to hold with the Russians about European security?

JAKE SULLIVAN, BIDEN ADMINISTRATION NATIONAL SECURITY ADVISOR: So, um, we have been clear as the United States, just yesterday the 30 nations of the NATO alliance were clear in a statement that came out of the North Atlantic Council, we’re prepared for dialogue with Russia. We’re had dialogue with Russia on European security issues for the last 20 years. We had it with the Soviet Union for decades before that.

We can make progress in some areas. In other areas, we’re just going to have to disagree. And that’s in the nature of dialogue as well. But fundamentally, our strategy is going to be to coordinate closely, to have allied unity, and then be prepared to sit with Russia and respond positively to the idea that we can have a discussion in the appropriate format on the principle of “nothing about you without you” and see where it takes us…

HAASS: China: And in particular, we’ve had interesting public comments in recent days and weeks by the leadership of both Australia and japan about Taiwan and how seriously they took Taiwan’s security predicament, how they were prepared to go to bat for [Taiwan]. Here we are, after Afghanistan, after what the Obama administration did and didn’t do in Syria, after Hong Kong, Crimea, what the previous administration did to the Kurds, now Ukraine where we’ve ruled out a direct defense.

Why not be clear about our willingness to come to Taiwan’s aid if China acts aggressively against it?

SULLIVAN: Well, I think the U.S. position when it comes to Taiwan actually is clear because it is a position that we have sustained to maintain peace and stability across the Taiwan strait for decades. It is rooted in the One China policy, the Taiwan Relations Act, the three communiques.

The Taiwan Relations Act is a unique instrument –we don’t have it with other countries, we don’t have it with Ukraine– that does talk about American commitments to support Taiwan in various ways. But the whole purpose of American policy towards Taiwan and towards cross-strait relations is fundamentally designed to ensure that we never face a circumstance in which we need to directly answer the question that you posed.

That is, we have approached things in the Biden administration, and to the extent that we see China diverging from the kinds of policies that could help maintain peace and stability, they’re taking actions that undermine peace and stability across the Taiwan strait, we will call them out. and we have called them out.

Because we believe there is a formula that works to maintain the status quo, to not have unilateral changes to the status quo, that is what the Biden administration is pursuing. and we think that is well-understood by our partners and is well understood in Beijing.