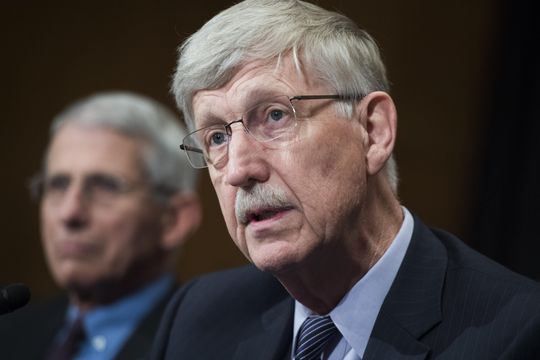 EDITOR’S NOTE: The Great Barrington Declaration is the best scientific response to the great un-scientific conspiracy we all live under these days.  It was launched in October 2020 by some of the top epidemiologists of the world today.  If anyone needs proof about the un-scientific Dr. Fauci, they need only listen to his interview by CBS last month, when Dr. Fauci said Republicans who criticize him are “really criticizing science, because I represent science. That’s dangerous.”   Just the fact that Fauci pronounced these words is the best proof that he has nothing to do with real science: NO REAL SCIENTIST WOULD EVER DARE UTTER SUCH WORDS BECAUSE REAL SCIENTISTS KNOW THAT DEBATE AND QUESTIONING IS THE MOST NECESSARY PART OF SCIENCE.  Instead, Fauci chose to use power to shut down dialogue…

How Fauci and Collins Shut Down Covid Debate

They worked with the media to trash the Great Barrington Declaration.

In public, Anthony Fauci and Francis Collins urge Americans to “follow the science.” In private, the two sainted public-health officials schemed to quash dissenting views from top scientists. That’s the troubling but fair conclusion from emails obtained recently via the Freedom of Information Act by the American Institute for Economic Research.
The tale unfolded in October 2020 after the launch of the Great Barrington Declaration, a statement by Harvard’s Martin Kulldorff, Oxford’s Sunetra Gupta and Stanford’s Jay Bhattacharya against blanket pandemic lockdowns. They favored a policy of what they called “focused protection” of high-risk populations such as the elderly or those with medial conditions. Thousands of scientists signed the declaration—if they were able to learn about it. We tried to give it someelevation on these pages.
That didn’t please the lockdown consensus enforced by public-health officials and the press. Dr. Collins, the director of the National Institutes of Health until Sunday, sent an email on Oct. 8, 2020, to Dr. Fauci, the director of the National Institute of Allergy and Infectious Diseases.
“This proposal from the three fringe epidemiologists . . . seems to be getting a lot of attention – and even a co-signature from Nobel Prize winner Mike Leavitt at Stanford. There needs to be a quick and devastating published take down of its premises,” Dr. Collins wrote. “Is it underway?”
These researchers weren’t fringe and neither was their opposition to quarantining society. But in the panic over the virus, these two voices of science used their authority to stigmatize dissenters and crush debate. A week after his email, Dr. Collins spoke to the Washington Post about the Great Barrington Declaration. “This is a fringe component of epidemiology,” he said. “This is not mainstream science. It’s dangerous.” His message spread and the alternative strategy was dismissed in most precincts.
Dr. Fauci replied to Dr. Collins that the takedown was underway. An article in Wired, a tech-news site, denied there was any scientific divide and argued lockdowns were a straw man—they weren’t coming back. If only it were true. The next month cases rose and restrictions returned.
Dr. Fauci also emailed an article from the Nation, a left-wing magazine, and his staff sent him several more. The emails suggest a feedback loop: The media cited Dr. Fauci as an unquestionable authority, and Dr. Fauci got his talking points from the media. Facebook censored mentions of the Great Barrington Declaration. This is how groupthink works.
On CBS last month, Dr. Fauci said Republicans who criticize him are “really criticizing science, because I represent science. That’s dangerous.” He isn’t “science.” And it’s also dangerous for scientific officials to mobilize to quash dissent, without which it’s easy to make tragic mistakes. A scientific debate over pandemic policy was and still is in the public interest, especially during a once-in-a-century plague.
Focused protection of nursing homes and other high-risk populations remains the policy road not taken during the pandemic. Perhaps this strategy wouldn’t have prevailed if a debate had been allowed. But it isn’t enough to repeat, as Dr. Collins did on Fox News Sunday, that advocates are “fringe epidemiologists who really did not have the credentials,” and that “hundreds of thousands of people would have died if we had followed that strategy.”
More than 800,000 Americans have died as much of the country followed the strategy of Drs. Collins and Fauci, and that’s not counting the other costs in lost livelihoods, shuttered businesses, untreated illnesses, mental illness from isolation, and the incalculable anguish of seeing loved ones die alone without the chance for a family to say good-bye.
Rather than try to manipulate public opinion, the job of health officials is to offer their best scientific advice. They shouldn’t act like politicians or censors, and when they do, they squander the public’s trust.
Appeared in the December 22, 2021, print WSJ edition as ‘How Fauci and Collins Shut Down Debate.’