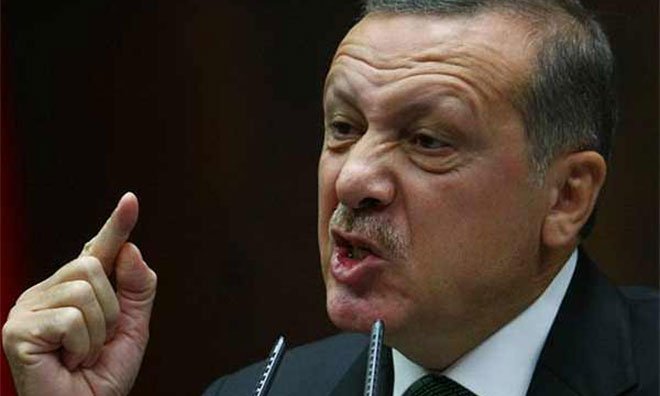 EDITOR’S NOTE (Nick Stamatakis): It is truly horrible to actually see in this well-documented article that the globalist and corrupt DC establishment – instead of cooperating with Russia against the supposedly “common enemy”, the extremist Islam and the jihadists, they have been constantly training them and using them (mostly through Turkey) to create problems in Russia’s periphery…  Why you might ask? What is the hidden cause of all this? My friends, you have to follow the money as the saying goes… Greed is the omnipresent problem of capitalism… The financiers of New York are using the “War Party”, as the look at the last real “Treasure Trove” on Earth, in Russia, Siberia, and the Arctic… They publicly proclaim – and they expect you the stupid folks to eat it up – that Russia is a small economy  “the same size as Italy”.  But they fail to tell you the real facts and numbers and especially the untold trillions of actual wealth hidden in their lands and seas… As for us, we were fed the “Bidenopoulos” b.s. by Karloutsos and Co. and now suddenly the tale is revealed: Biden and the War Party are selling the Greeks in an instant in order o achieve their goals in Russia…  But – faithless as thy are, they forget that there is an “Eye of Justice” ready to come down hard on them and destroy them…

Is Perfidious Erdogan Destroying Russia For the Great Turan?

Turkey’s President Recep Tayyip Erdoğan is notorious for slippery dealings with supposed allies whether NATO or the EU. However his greatest perfidy seems now to be directed against Turkey’s relationship with Putin’s Russia. Over the past two or more years in its dealings with Ukraine, Armenia, Syria, Libya and now most recently, in the failed revolution in Kazakhstan, Erdoğan has shown a clear pattern of not merely opportunism but actually perfidy or betrayal of trust, as in double-cross, in his dealings with Russia despite being dependent for energy and advanced defense equipment. Why, is the question.

From evidence that has emerged from the recent bloody riots and attacks by armed militants, on the Almaty airport, media and government buildings of Kazakhstan, including the gruesome beheading of at least two police officers by ISIS-like Jihadists, it is clear that there were two parallel destabilizations going on. One was the initial façade of peaceful protests against fuel price rises from the government of the energy-rich country which allowed Washington and the EU to call for “dialogue.” These were led by “human rights” activists trained by millions of dollars from the CIA-tied National Endowment for Democracy, likely the Soros Foundation-Kazakhstan and various other NGOs steered by CIA or MI-6. It’s clear that this was a kind-of “pseudo-Color Revolution” cover, behind which was a far more nasty regime change coup attempt.

The more serious attack was from an estimated 20,000 trained terrorists including foreign Jihadists, and organized crime thugs led by the head of Kazakh organized crime, Arman Dzhumageldiev. It is this second violent group that bears scrutiny. It appears Erdoğan’s MIT intelligence and military are deeply involved in the training and arming of the putschists, together with the CIA and MI-6. Asia Times Editor Pepe Escobar states that there was a “‘secret’ US-Turk-Israeli military-intel operations room based in the southern business hub of Almaty, according to a highly placed Central Asia intel source. In this “center,” there were 22 Americans, 16 Turks and 6 Israelis coordinating sabotage gangs – trained in West Asia by the Turks – and then rat-lined to Almaty.”

Erdogan and the Muslim Brotherhood

For years Erdoğan has been covertly training Al Qaeda and ISIS (terrorist organizations, both banned in Russia) jihadists inside Turkey and transporting them secretly over the border to Idlib and other strongholds inside Syria to join ISIS or the Syrian arm of Al Qaeda, Jabhat al-Nusra, to wage war against Bashar al Assad (and de facto against Russia there). In addition, for years Erdoğan has also been extremely close to the Muslim Brotherhood (banned in Russia), the secret political Islamic organization that worked with the CIA and MI-6 during the Arab Spring and decades before.

After the 2013 al Sisi military coup ousting the Muslim Brotherhood in Egypt, an estimated twenty thousand Brotherhood cadre were welcomed by Erdoğan’s AKP and given exile in Turkey. Since Qatar was forced to reduce its active support for the secret Muslim Brotherhood organization Erdoğan has emerged as the primary supporter and protector of the organization. In a 2020 interview with Russian TV, Syria’s President al Assad said that Erdoğan’s Muslim Brotherhood ideology, not Turkish national interests,” is the cause of his sending troops illegally into Syria, to fight for al Qaeda in Idlib.”

As Erdoğan began to distrust the huge organization of Fethullah Gülen, now in exile in Pennsylvania and accused of the failed 2016 coup against Erdoğan, it is clear that Erdoğan drew closer to the international network of the Muslim Brotherhood to expand his neo-Ottoman ambitions. Erdoğan’s head of MIT intelligence, Hakan Fidan, according to French journalist Thierry Meyssan, was active in spreading Turkish Jihadi influence throughout Central Asian former Soviet republics as far back as 2003. Today Istanbul is the de facto Muslim Brotherhood capital.

This had direct relevance on the recent coup attempt in Kazakhstan. The reported key on-the-ground organizer of the attacks in Almaty and other key cities against the government of President Kassym-Jomart Tokayev , was the now-ousted nephew of former President Nazarbayev, Samat Abish, a known Muslim Brotherhood member. Abish was just fired as First Deputy Chairman of the National Security Council, a key post since Nazarbayev named him in 2015. The Muslim Brotherhood has been designated a terrorist organization by countries such as Egypt, Bahrain, Saudi Arabia, Russia, UAE, and Syria.

The fact that Erdoğan is the prime backer today of the terrorist-backing Muslim Brotherhood–the de facto “mother” for Al Qaeda and ISIS among other Jihadist groups worldwide–combined with the fact that Erdoğan’s MIT, along with MI-6, CIA and Mossad were secretly training terrorists inside Kazakhstan for the attacks, and the fact that the key organizer of the January Kazakh armed insurrection, Samat Abish, is a known Muslim Brotherhood member, all suggest that the Erdoğan role in the Kazakh events was far more central than is being reported, despite Erdoğan ’s press comments of support for Tokayev.

Notably, the person named head of Britain’s MI-6 foreign intelligence in June 2020 is Richard Moore. Moore is a Turkish specialist who spent three years as an MI-6 agent in Turkey in the early 1990s and as Ambassador to Turkey in 2014-2017. The role of MI-6 against Russia is obviously far deeper than many imagine. The fact that a Turkish expert has been named head of MI-6 is highly significant and suggests the British-American intelligence agencies use of Erdoğan’s Turkey to destabilize the entire Muslim former Soviet Union is highly probable. The opportunist Erdoğan is clearly happy to be of help to his Anglo-American friends in this.

And destabilization of Kazakhstan, a vital “near-abroad” state for Russian security and economy, is far from the only area that Erdoğan is pressing Putin’s Russia. In Ukraine, Erdoğan has been highly provocative against Russia, openly supporting Ukraine’s bid to join NATO, a security red line for Moscow. He has also sold Bayraktar TB2 unmanned armed vehicles, Turkish drones, to Kiev for use against the ethnic Russians in Donbass. After the 2014 Maidan CIA coup in Ukraine, Erdoğan began moving closer to Kiev. In April 2021 Ukraine’s comedian-turned-president, Volodymyr Zelenskyy, met Erdoğan in Turkey to discuss Ukrainian purchase of Turkish military drones following their high success in the Azeri-Armenia Nagorno-Karabakh war earlier. Zelensky requested Turkish support for its dispute with Russia. Erdoğan replied by calling Russia’s annexation of Crimea, where the population is still 12% Turkic Tatar, illegal.

Erdoğan is clearly moving to contain Russian dominance of the Black Sea where Turkey’s Navy was dominant before 2014. At a June 2021 NATO meeting Erdoğan told NATO’s Secretary-General, “You are not visible in the Black Sea, and your invisibility in the Black Sea turns it into a Russian lake.” Turkey’s largest find in natural gas is off its black Sea coast which Turkey hopes will enable it to cut dependence on Russian gas imports. In 2020 some $41 billion in gas imports were mostly from Russia’s Gazrom via Turk Stream pipeline. Whether Turkey’s new gas discovery in the Black Sea, some 100 nautical miles from Turkey will be economical is far from clear and could take years to develop, making Erdoğan’s provocations of Russia more risky. The estimated gas find would equal about 13 years imports from TurkStream. But the discovery has clearly emboldened Erdogan in his moves against Russia.

In September 2020 the Turkish-trained army of Azerbaijan broke a fragile cease fire in the predominately Armenian Nagorno-Karabakh enclave with military force. It later was confirmed that not only did Turkish drones deal a devastating blow to the poorly-prepared Armenian forces, but also that Turkey’s MIT had secretly supplied seasoned Jihadi fighters from Syria into the war where they committed war crimes against ethnic Armenians.

The game changer was Azeri deployment of deadly Turkish military drones against Armenian targets. The drones are made in Turkey using Ukrainian engines. The loss of Armenian territory was a humiliating defeat not only for Armenia, but also for Putin, as Armenia is a member of Russia’s Eurasian Economic Union. It gave Turkey a huge credibility boost across Central Asia.

In 2019 the RAND Corporation in Washington delivered a report to the US Army command with the focus of forcing Moscow to intervene in threats to its border security in order to seriously weaken her stability. Aside from more economic sanctions, the report advocated, “causing Russia to overextend itself militarily or economically or causing the regime to lose domestic and/or international prestige and influence.” The RAND report called among other things for arming Ukraine against Russia in Donbass; promoting regime change in Belarus; increasing support for the Jihadists in Syria who oppose Syria’s Russian presence; exploiting tensions in South Caucasus including Nagorno-Karabakh, and reducing Russian influence in Central Asia including Kazakhstan. Much of Washington-backed actions against Russia in the last three years have followed the outlines of that RAND strategy.

In 2009 Erdoğan created something called Cooperation Council of Turkic Speaking States with its Secretariat in Istanbul. Its members include Azerbaijan, Kazakhstan, Kyrgyzstan, Uzbekistan and Turkey. The nominal goal is to emphasize their “common history, common language, common identity and common culture,” to cite their website. It is referred to in Turkey as Erdoğan’s Great Turan, a sort of neo-Ottoman Empire that would ultimately include most Central Asia and huge parts of Islamic Russia, China’s Xinjiang province, Mongolia and Iran. He recently showed a framed map of Great Turan given him in November by the leader of the Far-Right Nationalist Movement Party (MHP), Devlet Bahçeli.

It’s understandable why strategists in Washington and London would get excited by such Erdoğan ambitions. For them Erdoğan’s desire to create a huge Great Turan Turkic region of influence with Istanbul at the heart serve a highly useful purpose for NATO—the destruction of Russia as a functioning nation and power.

F. William Engdahl is strategic risk consultant and lecturer, he holds a degree in politics from Princeton University and is a best-selling author on oil and geopolitics, exclusively for the online magazine “New Eastern Outlook”