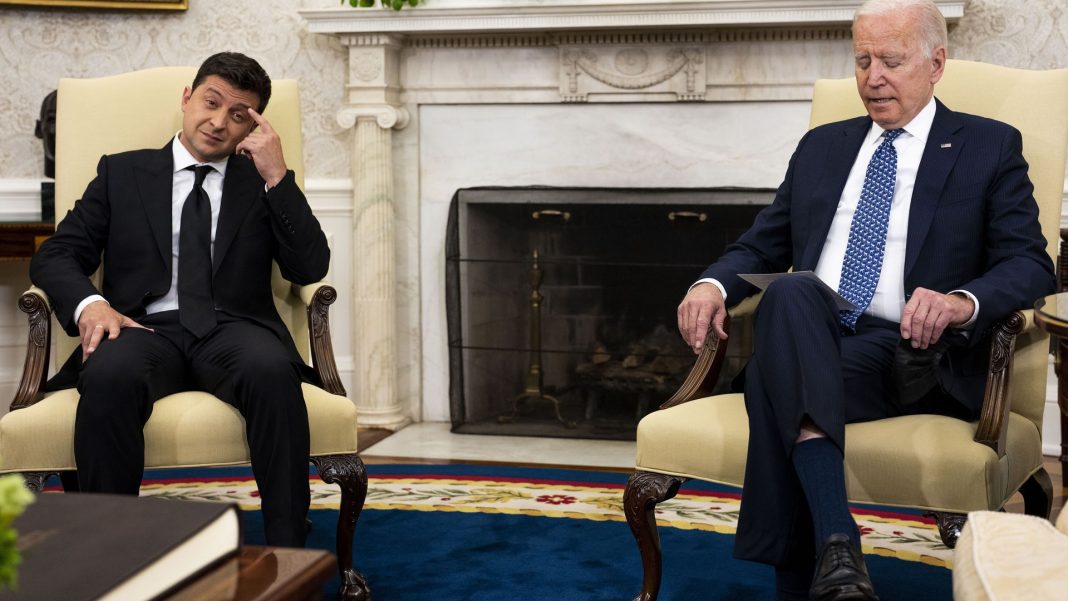 EDITOR’S NOTE (Nick Stamatakis): Many in Washington DC, prominent members of the “Military Industrial Complex” aka the “War Party” have started losing their sleep since Wednesday when the Paris ceasefire talks between Ukraine and Russia (observed by Germany and France) produced serious results – as we reported yesterday (link here).  Yesterday, “Biden” (the quotation marks obviously explain the peculiar situation of a “puppet Presidency”) had a long and seemingly angry phone call with President Zelensky of Ukraine.  Zelensky is now convinced – and with him the whole world – that the American “Deep State” wants one thing only: a military confrontation with Russia. Such a confrontation will have as a result further division of Ukraine into two separate countries (West and East – with East annexed by Russia).  Russia does not want this but simply demands security guarantees, the same guarantees the US would demand if Russia had missiles in Cuba or Mexico.

But the War Party for the past 5-6 years has seen their income decrease as they have no new wars… And they will not accept any “ceasefire” or a peace deal in Ukraine – especially one arranged by Germany and France.  And they will do anything to throw it off the rails. How? A possible way will be by getting rid of Zelensky – he should not feel “safe” at all these days…

As you can see we are approaching the end of the drama.  This particular drama is likely to end not with killings and tears but with laughter and ridicule. What do I mean? I mean that the failed “leaders” of the “War Party” who have managed to bring America close to a total collapse, are unable to present any meaningful response to Russia, either diplomatic/political or military.  Soon they will be ridiculed in the most public way.  When this happens, and the time approaches fast, the withdrawal from Afghanistan will look like a victory parade…

PLEASE READ THE NEWS FROM REALCLEARPOLITICS.COM AND WATCH THE FRIST FEW MINUTES OF ZELENSKY’S PRESS CONFERENCE WHERE HE DESCRIBES HIS PHONE CALL WITH BIDEN…

ALSO THE INTERESTING REPORT FROM INSIDER.COM WHERE ZELENSKY ACCUSES “BIDEN” OF CAUSING PANIC!!…

Ukrainian President Zelensky Told Biden Don’t “Panic” About War: “I Know The Details Better Than Any Other President”

A question to Zelensky was about the dissonance between his message that things are “under control” and leaks coming out of the White House and CNN that seems to suggest a Russian invasion is imminent.

He said he does not expect a war and sees no major escalation from what Russia has been doing for years. He said there are no “tanks on the streets” and President Biden should get information from him instead of the media.

“This is not our first phone call with President Biden. I would like to thank him, he is not just interested in Ukrainian developments, but he knows lots of details in terms of what is going on in Ukraine,” he said, which is a totally normal thing to clarify about a president who has visited Ukraine more than a dozen times.

“We are grateful to the United States for their ongoing support to our sovereignty and territorial integrity. But I am the president of Ukraine. I am based here. And I think I know the details better than any other president.”

“The question is not about the U.S. president,” Zelensky explained. “It is important that the president should know the situation from me, not from the intermediaries.”

“We do not see a bigger escalation than it has been before. Yes, the number of troops has gone up, but I was talking about this in early 2021 when there were drills in the Russian Federation, there was a big buildup… I don’t think the situation is more intense than it was at that time… there was no such coverage at that time of Ukraine.”

“We told the [American] president there has to be a balanced approach. I’m not saying he is influencing American media, the independent, but the media policy there has to be well-balanced. If they want to know what the situation is they can come to Kiev. Do we have tanks on the street? No.”

“If you’re not here, the feeling is when you listen to them in Germany and France, I’m talking to the president of Lithuania and other leaders. The image

He later said: “I don’t consider the situation now more tense than before. There is a feeling abroad that there is war here. That’s not the case.”

“I started talking to the leaders of the countries to explain to them that we need to stabilize the economy of our country because of those signals that say tomorrow there will be war, because those signals were sent by even leaders of respected countries, sometimes they are not even using diplomatic language, they are saying tomorrow is the war. That means panic in the market. Panic in the private sector… So how much does it cost our country to have to… We need unity. People have to be certain and sure in their army, in their president. People should trust their government and special services, but this varied information from varied sources can not mislead our country because this raises economic panic.”

(Translations confirmed to be generally the same as this one from Global News, though GN cuts out the first few minutes)

Ukrainian President Volodymyr Zelensky on Friday accused the West of threatening the health of the nation’s economy by causing “panic” over the threat of a Russian invasion.

“We don’t need this panic,” Zelensky said during a press conference in Kyiv, according to BBC News. “There are signals even from respected leaders of states, they just say that tomorrow there will be war. This is panic — how much does it cost for our state?”

Zelensky said the Western media’s portrayal of the situation gives the impression of “tanks in the streets of Kyiv.” He emphasized that part of Ukraine is already occupied by Russia, while contending that Russia poses a constant threat to his country that isn’t necessarily higher at present.

In 2014, Russia invaded and annexed Crimea from Ukraine, but it is still internationally recognized as Ukrainian territory. Russia since that year has also supported rebels in a war against Ukraine in the eastern Donbass region.

Russia in recent months has gathered roughly 100,000 troops on Ukraine’s border, prompting fears of yet another invasion.

Kyiv and Washington have offered different assessments over the scale of the threat posed by Russia’s military buildup along Ukraine’s border. The US in recent days has warned that Russia could invade Ukraine at any moment, which has clashed with Zelensky’s messaging and calls for calm.

When asked about a phone call between him and President Joe Biden that took place on Thursday, Zelensky said, “I’m the president of Ukraine, I’m based here and I think I know the details deeper than any other president.” The call was reportedly contentious, but Zelensky downplayed the notion that he and Biden are at odds.

Zelensky also said he thought it was a “mistake” for the US embassy in Kyiv to send home some non-essential staff and the family members of diplomats.

Russia claims it has no plans to invade, despite the massive force it’s gathered along Ukraine’s border.

“If it depends on Russia, then there will be no war. We don’t want wars. But we also won’t allow our interests to be rudely trampled, to be ignored,” Russia’s top diplomat, Sergey Lavrov, said on Friday.

The US has sought a diplomatic resolution to the situation, which has so far failed to yield any major breakthroughs. Russia has made demands for binding security guarantees from the West, including prohibiting Ukraine and Georgia from ever joining NATO. The alliance and the US have been firm that NATO’s open-door policy remains non-negotiable.

NATO and the US both delivered written responses to Russia’s demands this week, which remain confidential. But Secretary of State Antony Blinken and NATO Secretary General Jens Stoltenberg said that no concessions were made regarding Russia’s demand on barring Ukraine and Georgia from the alliance.

Russia has since complained that the US and NATO did not address its fundamental concerns, but all sides are seemingly open to continuing diplomatic discussions.

Russia will “carefully study the written responses to the draft agreements on security guarantees received from the United States and NATO on January 26, after which it would decide on further action,” the Kremlin said on Friday.

Meanwhile, the Pentagon urged Russia against pursuing an invasion of Ukraine.

“Conflict is not inevitable. There is still time and space for diplomacy. The US in lockstep with our allies and partners has offered Russia a path away from crisis and toward greater security,” Defense Secretary Lloyd Austin said at a Friday press conference.

Army Gen. Mark Milley, chairman of the Joint Chiefs of Staff, also warned that a Russian invasion would be “horrific” and lead to a “significant amount of casualties,” per CNN.

Though Biden has ruled out a military response on the ground in Ukraine if Russia invades, the US has placed 8,500 troops on heightened alert for a potential deployment to NATO member countries in Eastern Europe.