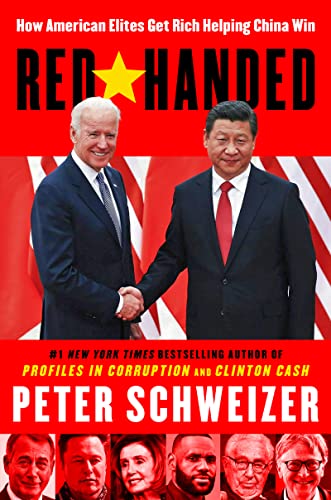 EDITOR’S NOTE (Nick Stamatakis): To those of us who are wondering why the Biden administration (and the powerful elites in Washington DC and New York) is treating China so “softly”, while they are excessively aggressive with Russia, the answer is found in this book by Peter Schweizer, “Red Handed”, bound to become a huge best-seller: Deal after deal the Bidens along with America’s elites are in bed with China making untold millions under the table… The Bidens are specifically involved in many lucrative scandalous deals not only in China but also in Kazakhstan, Ukraine, Turkey, and elsewhere as we have learned over the last few years.

As a result, instead of making an effort to make a deal with Russia, they make war against the nation’s interests.  Russia has many common enemies with America: First and foremost, they have to deal with militant Islam, and second, they are afraid of China’s expansionist plans in the eastern part of Siberia…  Yet, the corrupt Biden family and our elites betray America’s long-term interests threatening Russia with war…

ENJOY THE AUTHOR HIMSELF SUMMARIZE HIS BOOK FOR THE NY POST 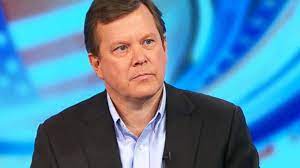 For those wondering why Joe Biden is soft on China, consider this never-before-reported revelation: The Biden family has done five deals in China totaling some $31 million arranged by individuals with direct ties to Chinese intelligence — some reaching the very top of China’s spy agency.

Indeed, every known deal that the Biden family enjoyed with Beijing was reached courtesy of individuals with spy ties. And Joe Biden personally benefited from his family’s foreign deals.

What are these deals? And who are the individuals who made them happen for the Bidens?

Here, then, are a few key facts about the Biden family’s $5 million-plus deals with individuals in bed with Chinese intelligence.

In 2018, I was the first to report on Hunter Biden’s involvement with a Chinese investment fund called Bohai Harvest RST (BHR). Hunter even introduced his dad to a company executive in December 2013 when father and son flew to Beijing on Air Force Two.

In October 2019, Hunter Biden’s lawyer George Mesires said Hunter would be resigning from the BHR board, without receiving any return on his investment or shareholder distributions.

What Team Biden failed to address was the fact that Hunter Biden still owned a stake in the investment fund, said to be 10%.

When I first reported on Hunter Biden’s China ties in 2018, Team Biden denied that they existed. Then they absurdly claimed that his stake in the BHR investment fund was only $420,000.

Steven Kaplan, who conducts research on issues in private equity, venture capital, entrepreneurial finance, corporate governance and corporate finance at the University of Chicago Booth School of Business, said a private equity fund with $2 billion under management will typically generate fees over its life of hundreds of millions of dollars.

“It is difficult to imagine, if not incomprehensible, that a 10% stake in those economics is worth only $420K,” Kaplan said via email. “The distinction they appear to be making is they capitalized the management company with $4.2M even if the fund manages $2B. The value of that management company is likely far in excess of $4.2M if they are managing $2B.”

Kaplan pointed to two large publicly traded private equity firms for reference, both of which have a market value of about 10% of the assets under their management. Using that as a rough guide, that would put the value of Hunter Biden’s share closer to $20 million, he said.

Two months ago, Hunter Biden’s lawyer said he sold his equity stake. They have not disclosed how much he made.

But courtesy of the Hunter Biden emails on his abandoned laptop, we now know two of the key individuals who made that deal happen. And at the time, they had close ties to the very top of the Chinese intelligence apparatus.

A Chinese tycoon named Che Feng, a k a “The Super Chairman,” played a key role in getting the deal going by introducing Hunter and his partners to large Chinese state-backed investment funds. Hunter saw a big payday. As he wrote in one email to business partner Devon Archer, “I don’t believe in lottery tickets anymore, but I do believe in the super chairman … I think the sky’s the limit.”

Who exactly is Che Feng?

At one time, he was business partners with the then-vice minister for state security in China, which is China’s KGB.

This man was reportedly the director of the ministry’s No. 8 Bureau, which targeted foreigners with its intelligence apparatus — including reporters, diplomats and businessmen. It was also reported that he oversaw intelligence operations for North America.

Another key figure in putting this investment deal together was Zhao Xuejun (a k a Henry Zhao) of Harvest Fund Management. Zhao is a Communist Party official. (“The mission of our Party is to bring happiness to people, and to revive the nation for people,” he has said.)

But more troubling — Zhao was at that time business partners with Jia Liqing, the daughter of the former minister of state security, Jia Chunwang.

In short, he was in charge of espionage, domestic and overseas intelligence work for China. Jia was famous during his tenure for developing China’s “deep water fish” (Chendi yü) strategy of developing thousands of special agents on foreign soil.

Zhao was also a key figure for Biden prospects in China. His fund participated in BHR, where Hunter Biden received a board seat. The business that he co-founded with Jia Liqing, Harvest Global Investments, also figures in Deal #2.

The purpose of this payment is unclear, but it may have been intended as an investment in Hunter’s business.

According to emails obtained from Hunter Biden’s laptop, Zhao may have sent other money, too.

“Henry remains committed to also making something work with myself and Hunter outside of this Burnham matter as mentioned before,” business partner James Bulger wrote. “He has a few interesting ideas.”

Zhao had suggested to Hunter and his business partners that he would structure a deal they estimated would be “putting money directly into our pockets.”

Hunter Biden had co-founded a firm called Rosemont Realty, and as early as 2011, he was looking for a Chinese buyer.

He had little luck initially, but then he and his partners received an “unsolicited offer” from a Hong Kong-based firm called Gemini Investments to buy his firm.

What is Gemini? The company is controlled by something then called Sino-Ocean Land, which was also chaired by the head of China Ocean Shipping Corporation (COSCO).

Japanese government agencies report that “Chinese intelligence services are closely linked” to COSCO. Some scholars in the West refer to COSCO as the “fifth arm of the Chinese Navy.”

For his part, President Xi Jinping has called the company “the dragon’s head for China” because of its strategic activities in Europe.

Hunter worked even more closely with COSCO in an attempt to buy the Greek national railway.

He also retained his stake in the company after the Chinese leadership took over.

Ye Jianming, a wealthy Chinese businessman and the head of CEFC China Energy, provided $6 million to the Biden family, according to a Senate investigation into Hunter’s activities.

In early 2017, one month after his father left office as vice president, Hunter Biden worked for Ye as a counselor and adviser, and Joe Biden’s brother James received some of the funds that Ye transferred to Hunter.

Five million came in the form of a forgivable, interest-free loan. Ethically, a loan is worse than a cash gift for a politician’s family, because the loan giver can always demand their money back if the recipient of the funds is not doing as they like.

Who exactly is Ye?

Ye Jianming once served in a leadership position within the China Association for International Friendly Contact (CAIFC), which is funded directly by Chinese military intelligence.

Hunter Biden received even more money in his relationship with CEFC and Ye Jianming.

In 2017, one of Ye Jianming’s “top lieutenants,” Patrick Ho, was arrested on bribery charges by the FBI for offering money to African officials in exchange for energy deals.

Hunter was soon hired by CEFC to be Patrick Ho’s defense attorney despite his little experience in criminal defense. CEFC paid Hunter a $1 million fee. Hunter referred to Patrick Ho as “the f–ing spy chief of China,” according to leaked audio obtained by RealClearPolitics.

These deals are disturbing enough, and are exacerbated by the fact that every one of them was made possible by an individual with ties that sometimes went to the highest levels of Chinese intelligence.

But there is also the curious fact that in 2014, Hunter Biden took the unusual step of telling the Secret Service that he did not want protection when he traveled overseas. The request happened shortly after he began securing deals in Beijing.

Money that Hunter Biden received from his overseas deals flowed to other members of the Biden family.

Joe Biden’s brother James  received over $1 million originating from the spy-connected Ye, according to a US Senate investigation.

And Joe Biden benefited, too.

In a text to his daughter, Hunter Biden insinuated that he was giving half his salary to “pop.” This is more than hyperbole.

Email records back him up to the extent that they show Hunter’s businesses paying some of his father’s bills while he was vice president of the United States. This means that Joe Biden benefited from these financial deals that happened courtesy of executives linked to Chinese spies.

Americans deserve answers as to why the Bidens received some $31 million and what promises or influence it bought. If Washington is to restore what’s left of its credibility, Congress must launch wide-ranging and serious investigations into the Biden family’s China cash haul and the resultant national security implications.

Peter Schweizer is the author of the new book “Red-Handed: How American Elites Get Rich Helping China Win.”