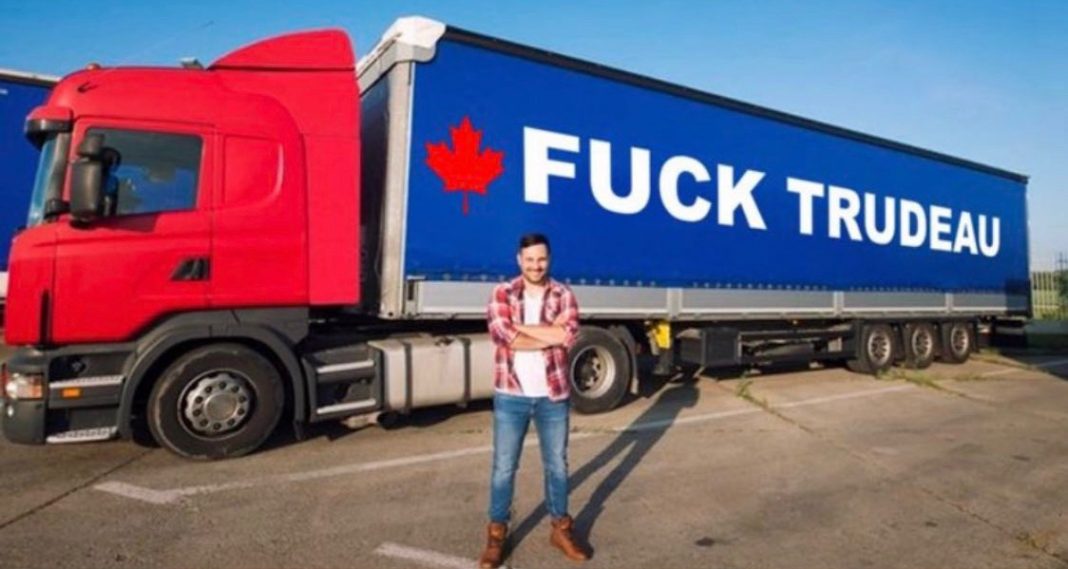 EDITOR’S NOTE (Nick Stamatakis): We did not expect anything better from the admirer of the socialist Cuba regime Justin Trudeau, prime minister of Canada. After hiding in a basement – literally scared by the HUGE numbers of the truckers demonstration who assembled outside Canada’s Parliament in Ottawa and were demanding his resignation, he appeared today to accuse them of being racists!! And he said he likes demonstrations and he took part in some organized by BLM!! Enjoy Trudeau alter the truth: The people demand freedom and the “little” Justin cares about his power….

AND HERE IS TUCKER CARSON DEMOLISHING HIM…

Justin Trudeau says he WON’T meet ‘Freedom Convoy’ because of their ‘hateful rhetoric’ and would rather go to a BLM rally: Covid-positive PM speaks from an undisclosed location as truckers blockade US border in Alberta

By ALEX HAMMER FOR DAILYMAIL.COM

Justin Trudeau has declared he will not be meeting with truckers currently overrunning Ottawa in protest of his vaccine mandate because of their ‘hateful rhetoric,’ as hundreds more disgruntled drivers flock to the southern tip of Alberta thousands of miles away to block off traffic to and from the US.

‘Over the past few days, Canadians were shocked and frankly, disgusted by the behavior displayed by some people protesting in our nation’s capital,’ Trudeau said Monday in a public press conference broadcasted remotely, referring to the unrest in Ottawa, which began on Saturday.

Trudeau, 50, held the conference from isolation at an undisclosed location after testing positive for COVID-19 earlier that day. Two of the prime minister’s three children also tested positive for the virus.

When asked whether he was going to meet the protesters, Trudeau said he had no interest in going ‘anywhere near protests that have expressed hateful rhetoric and violence towards their fellow citizens.’

The politician went on to assert that he had personally attended protests himself when he ‘agreed with the goals’ being fought for, such as those championed by Black Lives Matter, but dismissed the truckers’ dissent – which was spurred by the politico’s own policies – as ‘racist’ and ‘violent.’

‘I have attended protests and rallies in the past when I agreed with the goals, when I supported the people expressing their concerns and their issues,’ Trudeau said.

‘But I have also chosen to not go anywhere near protests that have expressed hateful rhetoric, violence towards fellow citizens, and a disrespect not just of science, but of the frontline health workers and quite frankly, the 90 per cent of truckers who have been doing the right thing to keep Canadians safe to put food on our tables.’

Meanwhile, nearly 2,000 miles west, hundreds more protesting truckers have convened at the southernmost point of the province of Alberta, forming a blockade between the territory and the US state of Montana to the south. 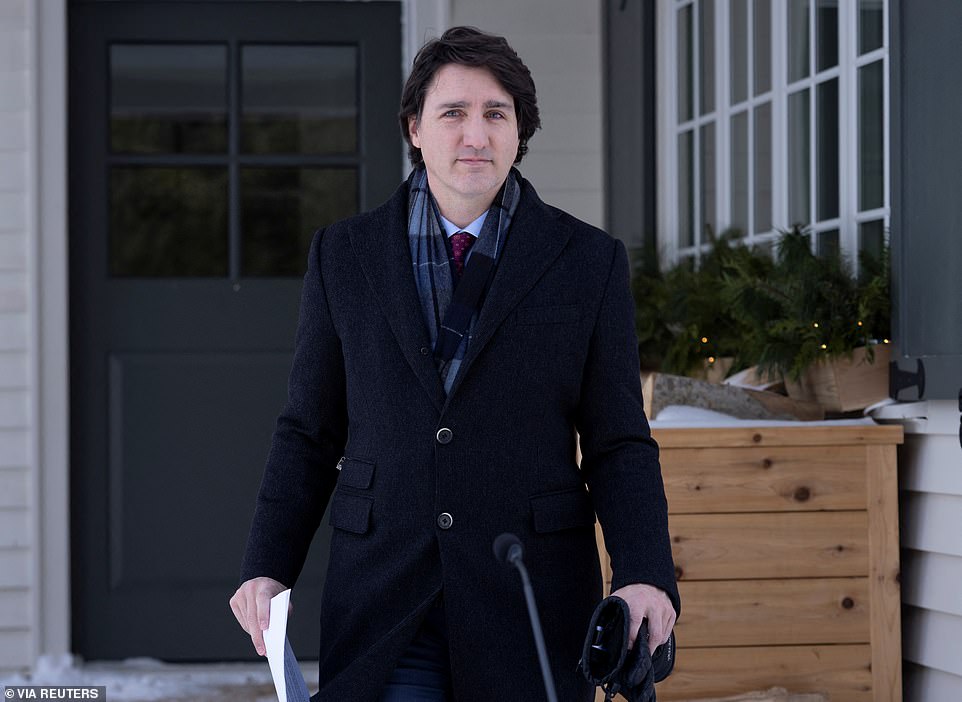 Canadian Prime Minister Justin Trudeau has declared he will not be meeting with truckers currently overrunning Ottawa in protest of his vaccine mandate because of their ‘hateful rhetoric,’ as hundreds more disgruntled drivers flock to the southern tip of Alberta thousands of miles away, to block off traffic to and from the US 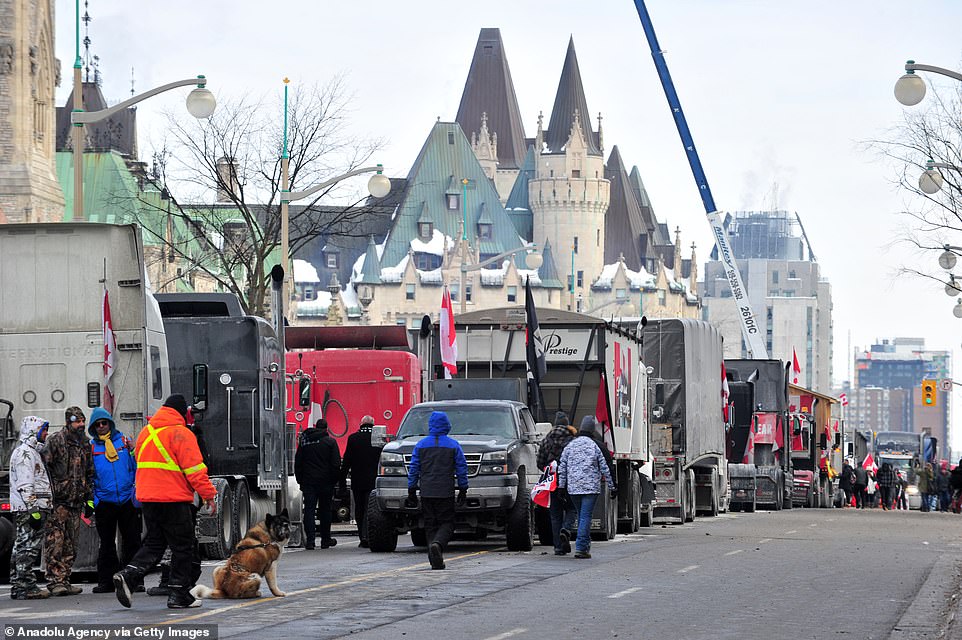 Roughly 50,000 Canadian truck drivers have showed up in Ottawa to protest against the prime minister’s new vaccine mandates and quarantine rules for drivers

Meanwhile, nearly 2,000 miles west, thousands more protesting truckers have convened at the southernmost point of the province of Alberta, forming a blockade between the territory and the US state of Montana to the south

The double-pronged effort from the coalition of more than 50,000 Canadian truck drivers – which has remained largely peaceful – was spurred by recent policies implemented by Trudeau’s office that declared that by January 15, all truckers in the country who are unvaccinated must take a COVID-19 test and quarantine when driving back from the states.

Per the progressive politician’s new guidance, Canadian drivers who are not vaccinated are barred from entering the US until they have gotten the jab, while American drivers are currently not allowed into Canada unless they produce a certificate proving that they have been inoculated.

The policy comes in stark contrast to that of the nation’s neighbor the south, with American drivers returning home to the US not required to test and quarantine.

During the address, Trudeau conceded that he understood the frustrations of the Canadian people regarding the ongoing COVID-19 pandemic but asserted that some of the behavior seen at the recent protests in the nation’s capital, including swastikas, Confederate flags, and the desecrating of memorials, was unacceptable.

‘I want to be very clear, we are not intimidated by those who hurl insults and abuse at small business workers, and steal food from the homeless. We won’t give in to those who fly racist flags. We won’t cave to those who engage in vandalism or dishonor the memory of our veterans.’

He added: ‘Freedom of expression, assembly, and association are cornerstones of democracy. But Nazi symbolism, racist imagery, and desecration of war memorials are not. It is an insult to memory and truth. Hate can never be the answer.’

Trudeau then called on the protesting truckers – and the thousands supporting them – to put a halt to their actions.

‘There is no place in our country for threats, violence or hatred,’ he asserted. ‘So for those responsible for this behavior, it needs to stop. To anyone who joined the convoy and was rightly uncomfortable with the symbols of hatred and division on display, join with your fellow Canadians. Be courageous, and speak out. Do not stand for, or with, intolerance and hate.’

In his speech, Trudeau went on to slam conservative politicians from his country for supporting the truckers’ protests, warning them to ‘think long and hard about the consequences of your actions.’

After the address, the prime minister doubled down on his stance in a series of posts on social media. 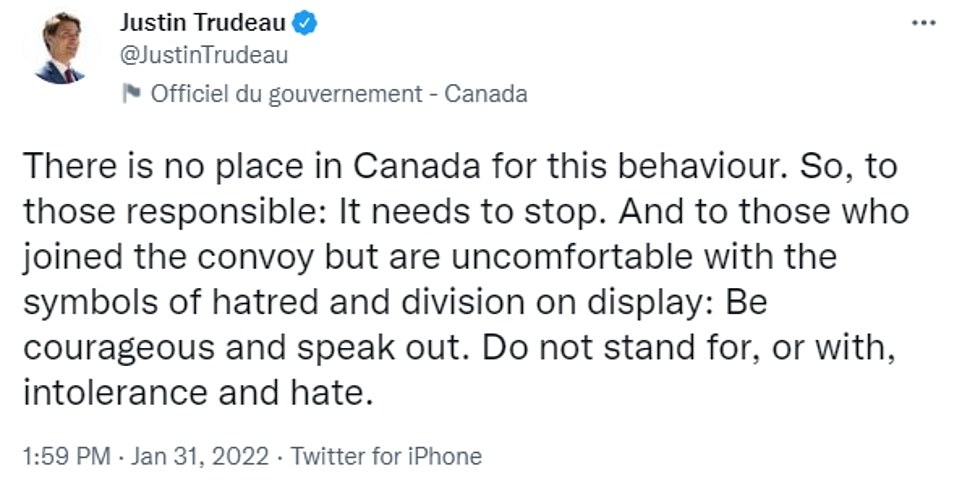