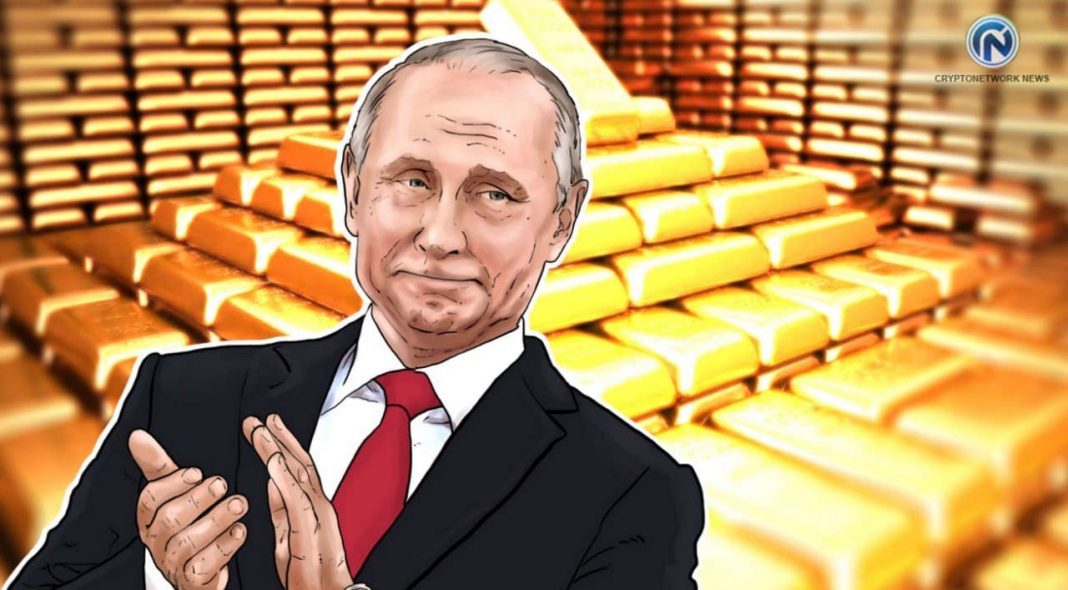 EDITOR’S NOTE:  Well, let’s enumerate: 1) Central Bank of Russia reserves of $640 Billion dollars – a record level, equivalent to 17 months of Russian export earnings. 2) Daily-earnings from oil and natural gas of $1 Billion. 3) Russia has already de-dollarized and only 10% of its exports is paid in dollars. 4) After 2014 Putin replaced SWIFT with MIR – which is connected even with  Apple Pay! 5) Russia has $130 Billion of gold reserves.  6) Russia’s national debt is only 30% GDP, while we all know the US debt is above 100% GDP.  7) With only a $60 billion defense budget (compared to $780 Billion of the US defense budget) Putin managed to have more advanced missiles, radar, and fighter jets… Why? He does not have to feed the “War Party” swamp…

YOU CAN READ MORE DETAILS BELOW…

How can Putin afford a war in Ukraine? His $130 billion gold horde helps

How can Russian President Vladimir Putin cope with the costs, direct and indirect, of another war in Ukraine? Easy, it has been preparing for years. The reserves of the Russian central bank now amount to 640 billion dollars, a record. This stack is equivalent to 17 months of Russian export earnings and continues to grow, thanks to soaring oil prices.

Russia exports some 5 million barrels a day of crude oil, plus 2.5 million bpd of refined petroleum products, according to Cowen & Co., which accounts for about 10% of global oil trade. With Brent crude hitting an eight-year high at $88.88 this morning, that’s more than $600 million a day in petro-cash.

It is important to note that it is no longer appropriate to refer to Russia’s fossil fuel revenues as “petrodollars”, as Putin has worked hard to “de-dollarize” the Russian economy. In 2013, Russia received dollars for 95% of its exports to Brazil, India, South Africa and China. Today, according to the Congressional Research Service, after a decade of dedollarization, only 10% of that trade is in greenbacks.

And Putin created new payment processing systems, replacing the Society for Worldwide Interbank Financial Telecommunication, or SWIFT (from which Biden threatened to cut Russia off); in 2015, after US sanctions, Moscow launched the Mir payment platform (now even connected to Apple Pay).

Putin has increasingly replaced dollar trading with gold trading. From a record high of $2 billion in gold in 1995, Russia has accumulated a mountain of it, which today is worth $130 billion, or 20% of total reserves. This equates to approximately 72 million 1 oz. gold coins, or 4.5 million pounds. Only the United States, Germany and Italy hold more gold.

Although Russia mines a lot of gold, platinum and palladium itself, some of the pile may come from friends like Venezuela, which in 2019 reportedly loaded 20 tonnes of it onto a Russian Boeing 777, as part of of a liquidation of some 300 tonnes of Caracas. coffers.

(Putin isn’t the only goldbug – central banks have added 4,500 tonnes of gold reserves over the past decade.)

According to Steve Hanke, professor of economics at Johns Hopkins University, the Russian central bank has shown great skill in managing the ruble, and it shows: since 2016, it has remained stable at 0.013 to the dollar. , although it has fallen by around 8% in recent months in Ukraine. military reinforcement.

Clearly, Putin has put funds to work by investing in his army. Spending peaked at $90 billion a year in 2013, before his invasion of Crimea, and totaled $60 billion in 2020, according to World Bank data.

This pales in comparison to US military spending of $780 billion and China’s $250 billion in 2020, although Russia spends more as a percentage of GDP, at 4%. Putin could probably increase that spending if he wanted to – according to BNP Paribas data, Russia’s public debt is 18% of GDP, while total external debt is less than 30% of GDP. Ukraine’s debt burden is 80% of GDP, while that of the United States is over 100%.