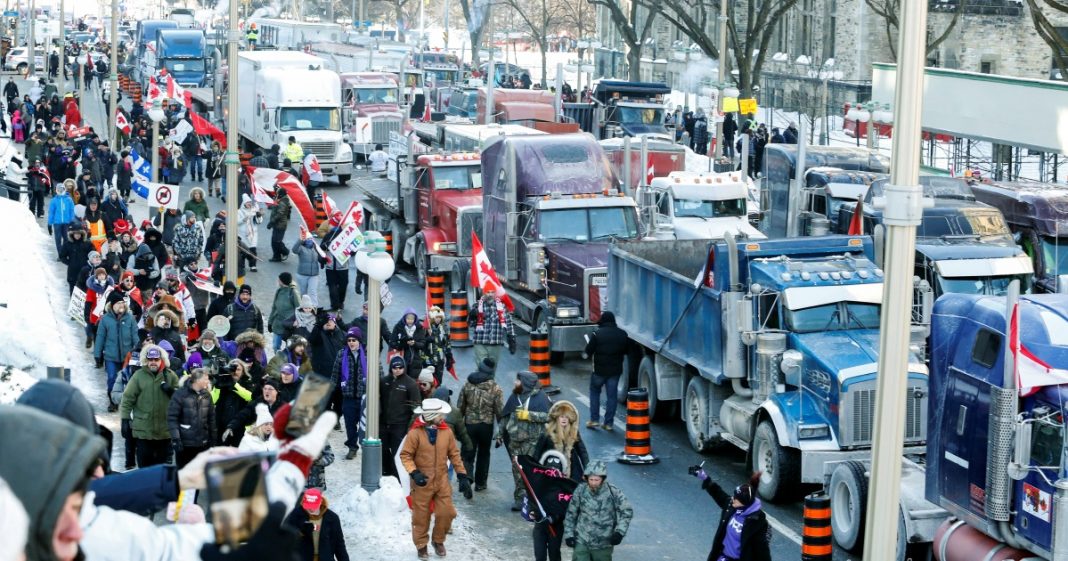 EDITOR’S NOTE (Nick Stamatakis): “Pretty Boy” Justin Trudeau finally gets paid in the most appropriate way. When mayors and police call towing companies to remove the protesting truckers their response was “We got Covid”!!! Ultimate arrogant Trudeau could not fathom that the day of his punishment will ever come…

Towing companies in Alberta, Canada reportedly refused the requests from the Royal Canadian Mounted Police (RCMP) to assist in the removal of trucks from Coutts Port of Entry on the north side of the Alberta-Montana border.

Abe Martens from Xodus Car Transport who also offers towing service told the Western Standard, “We are here with our trucks at the blockade, but we are participating and are in full support of the truckers.”

One of the largest towing companies in the area already said that they don’t want to get involved.

Authorities searching for tow truck companies to assist in the removal of trucks from Coutts border blockade are coming up empty-handed.

The Western Standard spoke with a number of tow truck companies in southern Alberta including in Calgary, Lethbridge and Medicine Hat.

City Wide towing in Calgary said they had tow trucks at the blockade yesterday to help support anyone in need, but confirmed no trucks stayed on scene.

“Our trucks won’t be heading outside of Calgary today,” said a call centre employee at City Wide who did not want to give her name.

“We will be remaining in Calgary to service the surrounding area.”

TnT Towing in Lethbridge is one of the largest towing companies in the area. When contacted, the person who answered the phone said they had no comment but did indicate they had been contacted.

“We don’t know who it was that called, but we don’t want to get involved so we won’t be commenting.”

One smaller towing company in southern Alberta that was approached to supply tow trucks said they are “stuck between a rock and a hard place.”

“We have created relationships in our community and contracts that would be in jeopardy if we participate in any way,” said a worker at the towing company who asked to remain anonymous to avoid any negative response to his company.

“A lot of these smaller companies don’t want to ruin their reputation in the communities they serve so they don’t want to get involved,” he said.

“We have received calls here to supply our trucks, but we’ve also had calls from locals who won’t identify themselves asking if we plan to send trucks. When I told them ‘no’ they said ‘good then we will keep supporting you.’”

In a video posted on Twitter, a woman said that she was just talking to a local who has lived in Ottawa for 30 years.

“He told me that the Mayor of Ottawa called tow truck companies to start towing the semis out of the streets and every company said that they have COVID,” the woman added.

And one report says the towing companies responded, “(Sorry) We’ve got COVID.”

This is the same excuse that Trudeau did to hide in isolation.  He fled his government offices almost immediately after his statement last Wednesday because of COVID exposure. He opted instead to work from home for the next few days in a cowardly attempt to wait out the angry protesters.