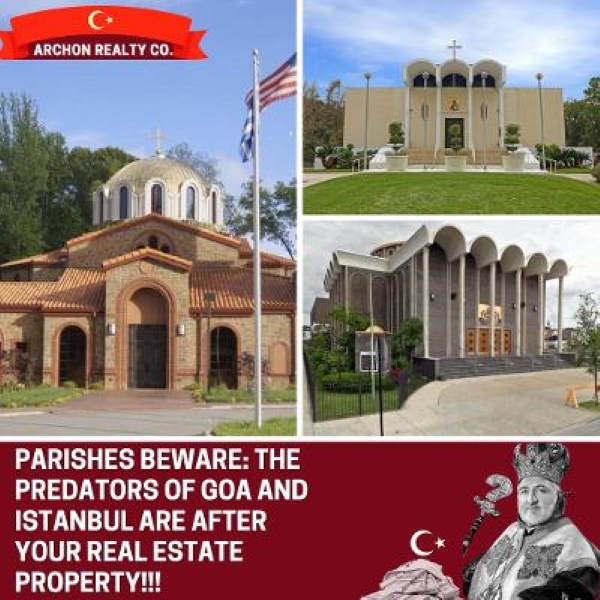 UPDATE (Monday, Feb. 7, 6.00 pm): It seems that our report on the “Questionnaire” on the New Charter by GOARCH caused quite a few people to lose their sleep, especially our focus on the question regarding the titles of property ownership and whether they should be owned by the Archdiocese, the Metropolis or the local parish. Some doubted whether our report is real: Of course, it is real and most certainly the question on property titles was included (in the last part of the questionnaire) – here it is you can see it with your own eyes QUESTION ON PROPERTY TITLES OF OWNERSHIP _20220207_0001.

It was not us who first reported the news of the Barna Group Questionnaire and specifically the question on property titles; it was Th. Kalmoukos in TNH on January 31st – again here it is  QUESTION ON TITLES OF OWNERSHIP – THE NATIONAL  HERALD_20220207_0001, and we acknowledged it in our post published on Feb.4 (below).  But “mysteriously” TNH failed to post the same, absolutely significant, piece of news in English.  Then, after our post of Feb. 4, they finally posted the story on Feb. 6, BUT THE QUESTION ON PROPERTY TITLES HAD MAGICALLY DISAPPEARED! (Again, trust your eyes by linking here)… Are we surprised by the new disgraceful lows TNH has fallen? No, we are not, this is who they are, led by the disgraced former undersecretary, who was fired mid-flight for lying… As I have said, when the history of the Greek-American community is written, the blame for the pitiful state of affairs of GOARCH and the community organizations, will not only belong not to the numerous wrong-doers of all kinds but mostly to those who abdicated their journalistic duty and failed to report them. TNH will be on top of this list.

Helleniscope has reported that in November 2020 GOARCH lost a significant legal case in the US Supreme Court when they (fighting along with the Episcopalians) asked the Court to rule that all church property belongs to the “Hierarchy”.  The legal precedent is very strong. But being the predatory wolves that they really are, they are now trying to grab it the only way left to them – by having the parishes sign off the property titles to them!! 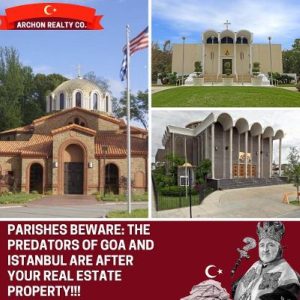 The US Supreme Court refused to hear the case and so the Texas Supreme Court decision, which favored the breakaway parishes, prevailed.  We noted last November: “GOA lost and there is now a very strong legal precedent, which should be the foundation of any further action our parishes may take. But have no doubt we are dealing with predators who will stop at nothing… Don’t be fooled by the “smiling Phanariots” – behind the smiles the Istanbul thieves will not hesitate to show their teeth… This battle will be fought in Court…”

Not three months went by and the Archdiocese predators, are trying to achieve the same in a very sneaky, Phanariot, way.  In the process of discussing the new Charter, the Archdiocese hired a firm (BARNA Group) to submit a questionnaire to the members of the Charter Advisory Committee.  Why only these 77 members (you can see their names by linking here)? Because the Phanariots, have no intention to apply to this Church any of the moral principles of Orthodoxy regarding governance, which requires the formation of a “consensus” between the hierarchy and the faithful.  On the opposite, coming from authoritarian Turkey they act like Sultans and they relay in all directions that the “Church is not a democracy”…  Below you can see the announcement sent to these 77 members by the Archbishop… 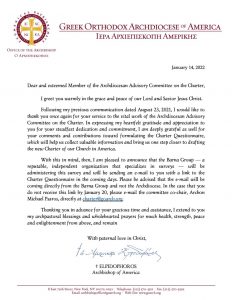 The story along with a brief description of the questionnaire was first published by TNH and Th. Kalmoukos – strangely only in Greek (while the questionnaire is written only in English).  I was able to get a copy of this questionnaire from my sources and, since I have enough experience in composing questionnaires from years of social science graduate studies, I can tell you that this one is rather loose and confusing.  Many questions have self-evident responses and others are rather unnecessary. And some, very important questions, are missing.

Many questions refer to the structure of GOA and whether it should be more hierarchical or more decentralized.  This fact alone, for those of us who have an idea of the evolution of GOA charters from 1977 to 2003 and to this new one, reveals the true purpose of this “questionnaire” effort: It’s basically a smokescreen and a trial effort to promote centralization.  At the end of this post, I will list some of the questions just for our audience to have a taste of this questionnaire. But I will bypass any serious analysis – it is not worth it. What to say about a “new charter questionnaire” that does not ask the most important question: “Do you want GOA to be administratively autonomous from the Patriarchate, yes or no?” They did not dare ask this question because they know that even from this limited number of respondents – many of whom are part of the Church establishment (Archons, Leaders, Senators, etc.) – the answer would be a resounding YES.  Had they asked all members of the parish councils nationwide the same question the answer would be an overwhelming YES…

But they found a way to sneak in towards the end of the list (roughly a total of 30 questions) the bombshell they were truly interested in:  Who should hold the title of ownership of parish properties? And the choices are a) The parish b) the Metropolis and c) the Archdiocese… The predators from Turkey will stop at nothing before they can put their dirty hands on the properties bought with the sweat and blood of five generations of Greek-Americans…

My friends, I am not sure how this predatory plan will unfold but it seems that the Phanariot wolves’ first effort will be to make the parish councils sign off the titles “voluntarily”. As they have shown many times over the years (and recently in Astoria) the parish councils serve at their will: if they don’t like a member they fire them!! So, they will make the priests – who are totally dependent on the Phanariot predators for their salaries and benefits – send the message to the parish council to “obey” the “Turks”… The Phanariots know they will face resistance in some or many parishes but they will take what they can now and they will wait to grab everything at a later moment… They have shown in many ways that they are not here for faith and ministry, they are here for business…

So what do we do and where do we go from here?

In the November 20, 2021 article I said that it is imperative that parish councils begin to prepare for a fight over their assets.

Finally, over the last few weeks I have heard voices of desperation from many corners, voices that echo the atmosphere of revolt against corrupt and abusive authorities in the U.S., Canada, Europe, and all over the world: IT IS TIME FOR ALL OF US TO DEMONSTRATE OUTSIDE THE 79TH STREET HEADQUARTERS!! ENOUGH IS ENOUGH AB ELPIDOKTONOS! GET THE FAITHLESS, HALF-EDUCATED “TURKS” YOU BROUGHT TO AMERICA AND GO BACK WHERE YOU BELONG! IN AMERICA YOU ARE AND YOU WILL ALWAYS BE A FOREIGN BODY!!

SAMPLE OF QUESTIONS included in the questionnaire (actually they represent the great majority and give you a very good idea of the total of about 30 questions).