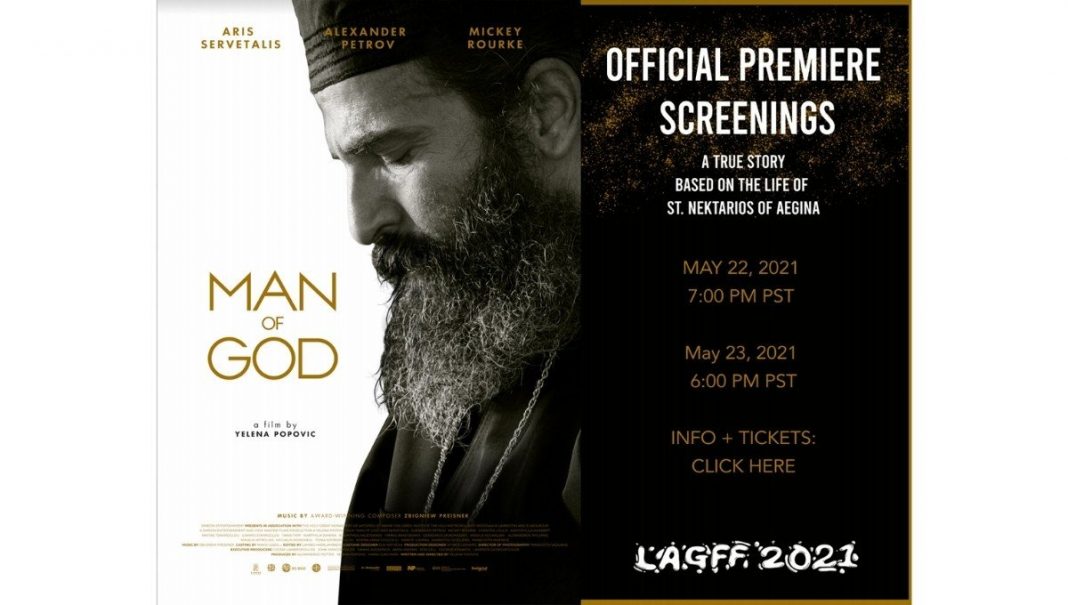 EDITOR’S NOTE (Nick Stamatakis): The award-winning movie “Man Of God” on the life of Saint Nektarios of Aegina, probably the most important modern Orthodox saint, will be available to be seen in 800 theaters all over the country for a single day, on Monday, March 21st!! (For more information link here). I have to say its release couldn’t be more timely, considering our current dismal state of affairs with the faithless leadership of our church, both in America and in the Patriarchate… Below is the trailer and a worthy article, inspired by the movie, by Jackie Morfesis.

I was blessed to be invited to watch in real-time a ZOOM panel presentation and conversation that took place with the director, actors, and those involved in the movie Man of God which will be coming to our parishes and theaters, which I gratefully attended. It was as one might expect, enlightening and spiritually fruitful. It was, in short, a gift to be witness to artists and actors speaking about a man who truly was and is now in the eternal realm, a man of God.

However, Man of God, brings another message to us that was true in the time of St. Nektarios and still rings true today. A truly spiritual soul being attacked and undermined by those in authority and otherwise who have earthly desires and concerns. And to understand one of the core themes of this film that speaks to the life of St. Nektarios and his earthly and spiritual struggles, especially with those in ecclesiastical authority, we only need a reference to 2 Corinthians 11:13. “For such men are false apostles, deceitful workmen, disguising themselves as apostles of Christ.”

It does not take much to be seen as a threat to our own Greek Orthodox Archdiocese and hierarchy. Why? Because those who truly walk with God are still attacked, maligned, shamed, and ostracized by the powers that be, and for one simple reason: they are seen and perceived as a threat.

A threat to the establishment on earth that many times distorts God’s Holy Word. That distorts the tenants of our faith. That is more interested in material gain than spiritual fulfillment. That seeks the earthly desires of power, influence, and status, over the Godly desires of humility, service, and mercy. And I have witnessed this again and again in my years as a faithful Orthodox Christian.

And this truth is – it is not only a travesty but a tragedy. We know very well, that if St. Nektarios were among us today, he would be treated the very same way by most of his contemporaries and by the powers that be in the Orthodox Church. And if you have any doubts as to the veracity of this statement – let me give you a few examples.

We know that our own Patriarch Bartholomew appointed His Eminence Archbishop Elpidophoros. And we know that positions and statements that the archbishop has repeatedly made that are antithetical and even heretical towards the Orthodox Church, are all the while under full approval of higher authorities. In fact, one can discern that much of his writing is scripted.

Why? Because he is functioning in many ways as a puppet, a mouthpiece. A figure head, given worldly, but who does not hold true spiritual authority. When I read his heartless missive on the unborn, distorting God’s Word, and speaking to the sanctity of life and to a woman’s autonomy in choosing life or termination of her pregnancy, in the same breath, making assumptions about and maligning our most Holy Theotokos, I knew we were dealing with deceit at an unprecedented level. One dangerous to us as faithful but also dangerous to our church.

When I reached out to the Greek Orthodox Archdiocese headquarters in New York City and spoke to the Director of the Archbishop’s office in a lengthy and what I perceived to be a thoughtful conversation, many of my thoughts and concerns were validated. I was told I was not the only one to voice my concerns at the direction the archbishop was taking, and I truly felt heard and understood, not only intellectually, but spiritually. In fact, it was assured to me, that prayers were also being offered within the Greek Orthodox Archdiocese for the healing and future of our Church under the leadership (if one can use such a word) of the archbishop and the direction he was taking that warranted response. I felt at that moment that I had truly found a kindred spirit in a sea of confusion, bewilderment, and distortion.

However, despite my momentary sense of validation and hope that indeed my words would be taken to heart and into consideration, I was instead dealt an immediate blow of repercussion. Swift and immediate. I was canceled from posting any comments on the social media page of the Greek Orthodox Archdiocese. I am only permitted to read the posts and comments but not to participate. “Not to participate”. Ostracization. Just like I have been canceled from the social media page of Ancient Faith Ministries under the questionable leadership of Father Andrew Stephen Damick. Why? Because I am a woman of God. Yes, a woman of God. A woman of God who knows His Holy Word. And knows when we distort God’s Word for our own benefit. And a woman who is fearless in the face of attacks against our Church. And unafraid to take my position as an ambassador in Christ’s kingdom, right here, on earth. “When you pass through the waters, I will be with you; and through the rivers, they shall not overflow you. When you walk through the fire, you shall not be burned, nor shall the flame scorch you.” (Isaiah 43:2).

Rest assured; the times have not changed since the days of St. Nektarios’ struggles on this earth. In fact, in lieu of advanced technology, and dissemination of information, in this case, inaccurate and false information in response to our faith, we are even in the more treacherous and mined territory. And the repercussions for being a “Man of God” or “Woman of God” are swift, definitive, and merciless.

But rest assured, nothing that man can do to us on this earth is “definitive.” Why? Because “Jesus Christ is the same yesterday, today, and tomorrow”. (Hebrews 13:8). And God has the final authority on how His purpose will play out and move upon this earth and through time. What the enemy meant for harm, I meant for good. “As for you, you meant evil against me, but God meant it for good, to bring it about that many people should be kept alive, as they are today.”(Genesis 50:20)

Let us not be deceived. Let us instead be wise as serpents and harmless as doves. “Behold, I send you forth as sheep in the midst of wolves: be ye therefore wise as serpents, and harmless as doves”. (Matthew 10:16). The enemy is alive and well right on this earth. Those who seek to subvert and distort God’s Holy Word and attack our Holy Orthodox Church, inch by inch, subtlety, insidiously, even brazenly and recklessly until the very foundation of the church becomes eroded and compromised. And the most dangerous of all are those as scripture tells us, are disguised. Who seem harmless and who seem supportive, but in truth, are nothing but wolves in sheep’s clothing.

Please, I beg you, when you see and enjoy the theatrical experience of Man of God, do not see it through earthly eyes. But see it through spiritual eyes. See it through your eyes as a child of God. And know that the greatest way to honor and remember St. Nektarios is to continue to fight the good fight and be courageous and bold against the powers that be on this earth and within our own Greek Orthodox Archdioceses. In fact, against all powers that be who are not congruent with our faith, with God’s Holy Word, and who seek to silence the voice of His children. And know that the only power that we should fear and indeed worship is our Lord and our God. For now and all eternity.