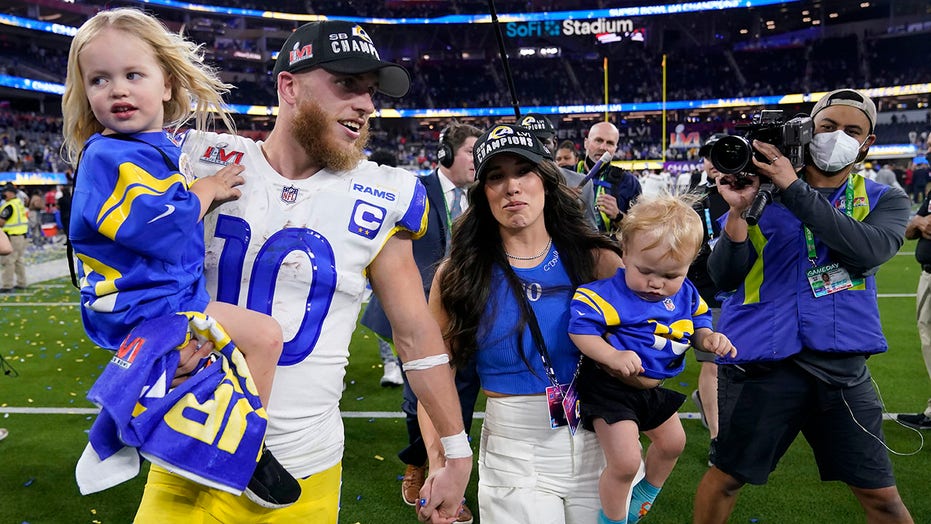 EDITOR’S NOTE (George Gialtouridis): After the drug use and prostitution glorification in the subcultural music and lyrics by the equally subcultural performers during yesterday’s Super Bowl halftime show, after the white boy’s (Eminem) extended Colin Kaepernick-style kneeling at the end of the show, it was obvious after the game’s conclusion that the true glorification was to the one and only God, the God who inspired the players to give it their best, which they did, and after the game these players praised the Almighty.

The cancel-culture and subculture executives in charge of the Halftime Show production certainly got what they deserved as the true God once again prevailed and the players felt the blessing, felt the inspiration, felt the love and gave praise to the Almighty in front of 250 million viewers all over the world.
Amen.

Faith was a broad river running through Cooper Kupp on Sunday as the Los Angeles Rams wide receiver was named MVP of Super Bowl LVI. On the day, Kupp caught eight passes, two for touchdowns, totaling 92 yards, and also ran for seven yards, according to Sports Spectrum.

But after the game, Kupp had other things on his mind besides personal heroics. “It just comes down to this team, how we’ve prepared, the way we’ve loved on each other, trusted each other,” he said.  “I don’t know, I don’t feel deserving of this. God is just so good. I’m just so thankful for the guys I get to be around, for the coaches, for my family.”

Kupp then took reporters on a journey to another place, and another time, where he had a vision from God.  “In 2019 we walked off the field that last time after losing to the Patriots; I wasn’t able to be a part of that thing,” he said.  “But I don’t know what it was, there was just this vision God revealed to me that we were going to come back, we were going to be part of a Super Bowl, we were going to win it. And somehow I was going to walk off the field as the MVP of the game,” he said.  Only one other person knew of that moment until Sunday.

“I shared that with my wife because I couldn’t tell anyone else obviously what that was, but from the moment this postseason started, there was just a belief, every game, that it was written already,” he said.

“It was written already and I just got to play free, knowing that I got to play from victory, not for victory. I got to play in a place where I was validated not from anything that happened on the field but because of my worth in God and my Father,” he said.

Kupp was asked a follow-up question about the vision.

Kupp was not the only player to speak of God after the game.
“It’s the best feeling in the world,” LA defensive tackle Aaron Donald said after the game, according to The Sporting News.  “God is great. I’m at a loss for words. I don’t know what to say. This is a blessing.”
Super Bowl MVP Shares ‘Vision That God Revealed to Me,’ Quotes Bible Verse (westernjournal.com)
Sports Spectrum on Twitter: ““God is great.” Super Bowl champion Aaron Donald #SuperBowl @AaronDonald97 https://t.co/EO9cRSnLV4” / Twitter
Sports Spectrum on Twitter: ““There was just this vision that God revealed to me…” After winning Super Bowl MVP, Cooper Kupp reveals a vision he received from God three years ago after the Rams lost Super Bowl LIII. @CooperKupp @RamsNFL #SuperBowl https://t.co/oydVm3TbUN https://t.co/bZrmjE2cEP” / Twitter