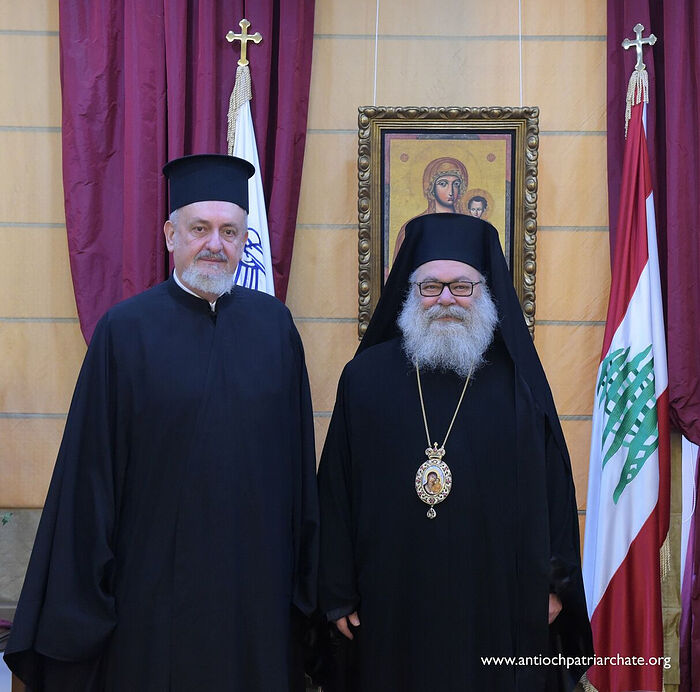 EDITOR’S NOTE (Nick Stamatakis): Helleniscope has reported on the planning of the Synod of the Ancient Patriarchates, including the Church of Cyprus, to take place before Easter in order to discuss the Schism.  As you will see below, the Patriarchate of Antioch has s far downgraded this planning, calling it a “meeting” while the Constantinople Patriarchate has been trying in the opposite direction, calling it a “synaxis”. At the moment, until the Holy Synod of Antioch convenes nobody is sure whether Antioch will be part of the event. It is likely that both Jerusalem and Antioch will seek guarantees that they will not be locked into a process deciding harsh measures against Moscow…

Below is the report from Orthochristian.com.

LOWERED EXPECTATIONS? ON THE PROPOSED COUNCIL OF THE PENTARCHY It was widely reported and well known that the Patriarchs of Constantinople and Alexandria had plans to convene a council of the primates of the “ancient Churches” of Constantinople, Alexandria, Antioch, Jerusalem, and Cyprus to deal with the Russian Synod’s decision to establish an African Exarchate.

Some outlets spoke about this as a revival of the ancient Pentarchy, with the Church of Cyprus taking fifth place, which will punish the Russian Church (one Greek hierarch has even explicitly called for the Russian Church to be deprived of its autocephaly).

The groundwork for this was clearly laid by Patriarch Theodoros of Alexandria in his “Encyclical to the Holy Clergy and Pious People of Our Ancient Patriarchate of Alexandria and All Africa,” where he implicitly presents a tiered concept of autocephaly, where Constantinople, Alexandria, Antioch, and Jerusalem were always responsible for solving problems in the Church, while Constantinople held a place of primacy in the East. The Church of Cyprus is also mentioned as an ancient Church, though clearly with lower standing than the Patriarchates.

Later Patriarchates, including the Moscow Patriarchate as his letter indicates, are presented as possessing less authority, as practically an aberration, where new states used secular power to achieve autocephaly status for their Churches, granted self-sacrificially by Constantinople.

Both hierarchs visited His Beatitude Patriarch John X of Antioch in the past week, and it’s interesting to compare the differences in the Antiochian and Constantinople press releases about these visits.

Though the first Antiochian statement follows the typical pattern: “The hierarchs met in a warm and friendly atmosphere and discussed matters of mutual interest, etc.,” the language seems to imply that Constantinople has already lowered its expectations for this revival of the Pentarchy that will condemn the actions of the Russian Church, with the accompanying canonical sanctions.

His Beatitude John X, Patriarch of Antioch and All the East, received His Eminence Metropolitan Emmanuel of Chalcedon, envoy of Ecumenical Patriarch Bartholomew I, at the patriarchal residence in Balamand. The Elder Metropolitan carried an invitation to participate in the meeting of the four Apostolic Patriarchates, proposed to be held before the Great Lent and Holy Week in Constantinople, to discuss the issues facing the Orthodox Church. The meeting raised the discussion about the historical relations uniting the Churches of Antioch and Constantinople, as well as the overall emerging issues.

There are three interesting points here:

The next day, Constantinople issued its own statement about Met. Emmanuel’s visit to Pat. John:

The two ancient Patriarchates, which have maintained brotherly relations for centuries, reiterated their desire to jointly contribute to the consolidation of Pan-Orthodox unity through another Synaxis of the primates of the senior Patriarchates in the near future.

Here, the stronger term, “Synaxis of the primates” is used, and the wording gives more of an impression that Pat. John accepted the invitation to attend.

And again the next day, Antioch issued another statement, this time about the visit of Metropolitans Gregory of Cameroon and John of Zambia from the Church of Alexandria:

The Metropolitans briefed the Patriarch on the developments that the patriarchate has witnessed after the creation of the African Exarchate by the Russian Church. The gathering also discussed the meeting of the patriarchs of the four apostolic churches proposed to be held by the Patriarchate of Constantinople before the Holy Week.

His Beatitude reiterated to the Alexandrian delegation what he had told the envoy of the Ecumenical Patriarch, Elder Metropolitan of Chalcedon, Emmanuel, that the Holy Antiochian Synod would meet soon to confer the developments in the Orthodox Church and take an appropriate stance on them.

The Antiochian Church speaks again of a “meeting” of the primates of only the four ancient Patriarchates, and here it is emphasized that Pat. John will not make any unilateral decision about whether to attend the gathering, but will leave the matter to the Synod of the Antiochian Patriarchate.

Thus, based on the Antiochian statements, it can be reasonably suggested that Constantinople has lowered its initial expectations for a council of a revived Pentarchy that will bring the hammer down upon the Russian Church. Perhaps they came to understand that even were all the invited Patriarchs to attend, such a council, with its implicit system of tiered autocephalies, would never be accepted by the Church at large.