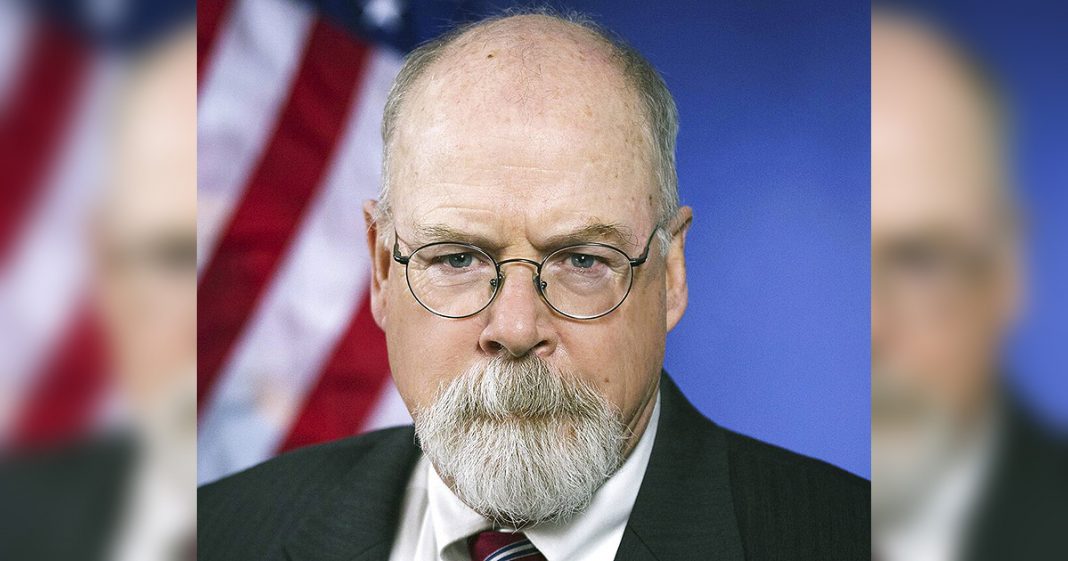 He’s going too slowly and charging the Russia Hoaxers too lightly to be taken seriously.

Once again, we see the conservative pundit class go bananas over the new motion filings from the Durham investigation in the last few days. Suddenly, everybody at Fox News is “expecting more indictments” at any moment! (How did that turn out for Sean Hannity and Dan Bongino the last time?) Suddenly, everybody is supposed to be excited that Durham’s crack team finally figured out spying activities against Donald Trump that occurred in July 2016.

This is a mistake.

The first question you should be asking yourself is why it took the Justice Department almost 6 years to figure out those spying activities.

Let me use the proper analogy here. It’s like going back to your old ex-boyfriend who never treated you well because he called you once over the holidays. You know that it’s going to end badly before you even call him back — but you’re lonely and you can’t help yourself. It’s a troubled and abusive relationship — the one between FBI Special Counsel John Durham and American voters who want justice for the Russia Hoax. I don’t want to see you get your feelings hurt.

Let me explain why you’re probably being played again.

Durham Appointed A Democrat To Be His #2

In March of 2019, Nora Dannehy returned to the U.S. Attorney’s Office to serve as Durham’s top aide. She left a year later in August. What happened? According to press reports at the time, Dannehy had to resign from the Justice Department “at least partly out of concern that the investigative team is being pressed for political reasons to produce a report before its work is done, colleagues said.” In case you missed the point, the Hartford Courant added helpfully: “Colleagues said Dannehy is not a supporter of President Trump and has been concerned in recent weeks by what she believed was pressure from Barr, who appointed Durham, to produce results before the election. They said she has been considering resigning for weeks, conflicted by loyalty to Durham and concern about politics.”

A U.S. Attorney resigning due to politics is like a Navy captain resigning due to water. It’s an absurd excuse. (Dannehy has since confirmed her liberal credentials by being named General Counsel to Connecticut Governor Ned Lamont (D). It looks like Dannehy signed up for an investigation that would do nothing, and then resigned publicly when the American public demanded an update on her activities. Needless to say, there was no reason for Durham to name someone like Dannehy to help investigate the origins of the Russia Hoax when everybody knows that the Russia Hoax leads back directly to Democrats like Hillary Clinton and Barack Obama.

Remember that Durham and Dannehy and the rest of the Justice Department sat around and did nothing about the Russia Hoax through most of the Trump Administration — an inexcusable lapse that should never be forgotten. Their boss, Attorney General Bill Barr, played a heavy hand in the stolen 2020 election— and it was to ignore election fraud. Getting rid of President Trump has been the overriding goal of the FBI and the CIA and the DOJ since 2016 — and Durham is an employee of the DOJ. He’s not Clint Eastwood and the Lone Ranger rolled up into one superhero.

The bottom line: hiring Nora Dannehy should make you wonder about John Durham.

Why should it suddenly be exciting to people to hear, one more time, that Hillary Clinton (and Barack Obama) spied on Donald Trump’s campaign? Didn’t we know this already? Haven’t we known this for almost six years?

Ask yourself: why would it take Durham more than 3 years to file these indictments?

Why has Democrat super attorney Marc Elias not been indicted yet? Why was the Democrat snakepit law-firm Perkins Coie allowed enough time to sever itself from Marc Elias last year (on August 22) while Durham was going over their billing records before filing charges (on September 16) against Perkins Coie partner Michael Sussmann? Let me hazard a guess. It’s probably because Elias is absolutely essential to Democrat efforts to stop election integrity laws in various swing states across America. In other words, he’s too valuable to the Biden Administration to be indicted right now. Maybe after the midterms.

How about National Security Advisor Jake Sullivan — was his indictment lost in the mail too? Sullivan is up to his neck in the Russia Hoax, and he’s easy to find over at the White House with those blank eyes and that terrible haircut. Why hasn’t the Biden Administration been deprived of his services yet? The answer is perfectly obvious: Sullivan and Elias are getting the kid glove treatment from the U.S. federal government.

Just look at the Kevin Clinesmith case. The sentence was a complete farce. Durham asked for a few months in prison (which is absurd) as punishment and got nothing but probation. How’s that for justice? Clinesmith pled guilty to a felony, but he’s not even been disbarred in Washington DC.

That’s what happens when you charge national security officials who conspire against the President with process crimes. This should tell you that Durham’s investigation is basically a sham. It took 3 years just to get to the lowest tier of conspirators. By the time Durham gets to the major players in the Russia Hoax, we will all be living through the second Hunter Biden Administration.

(The Russia Hoax has so many jokers that it deserves its own deck of cards.)

Durham and his team have the habit of filing indictments at the last possible moment —usually a day or two before the statute of limitations expires. What does that mean? It means that Durham is playing for time. That’s why media reports that Durham is “about to release his report” always turn out to be false. That’s why the charges that Durham brings against bad FBI lawyers are very narrow and involve light sentencing. He wants his investigation to run as long as possible. Why would he want to do that?

My own theory is simple: Durham exists so that the FBI can regain some credit with the American public (“hey, those Clinton people lied to us!”) while directing the media narrative away from Obama. You already see this misdirection in the corporate media headlines this week: Hillary did it. Durham exists, in other words, as a kind of insurance policy against the ambitions of the Clintons. His real goal is keep his investigation afloat through 2024. That would explain his slow, slow, slow progress. If Hillary Clinton suddenly decides to run in a primary against Biden/Harris for the 2024 ticket, then Lady Macbeth and her old campaign staff (Sussmann, Elias, Sullivan and the rest of them) will find themselves in very hot water.

If you find it implausible that national security officials spend all their time interfering in domestic politics and rigging elections — all I can say is: what cave have you been hiding in for the last six years? Perhaps you should listen to Overstock’s ex-CEO Patrick Byrne explain how he assisted the FBI in setting up Hillary Clinton to accept a $18 million bribe in 2016 — a bribe that Byrne claims was engineered by James Comey to help President Obama keep control of Hillary once she won the election. Apparently, the plan was for Hillary Clinton to be POTUS in 2016 and 2020 before Michelle Obama took over in 2024 — that’s what Byrne was told “by four officials of three different flavors” from our three-letter agencies at the time.

It’s an incredible story — and you simply have to watch Byrne explain “Operation Snow Globe” in detail (it starts at minute 24:30). It’s probably the best explanation of what really goes on inside the Deep State that we can expect to hear from a participant. Even so, Byrne’s story simply confirms what you already know in your gut about America in 2022. We don’t just have fraudulent elections due to electronic voting machines — we have fraudulent elections because the entire system is rotten. The system understands that it has to pretend to clean itself up too — because the illusion of “the consent of the governed” is still required. That’s why Durham is pretending that he will clean up the Russia Hoax mess — but are you dumb enough to believe it?

He’s going too slowly and charging the perpetrators too lightly to be taken seriously. Durham isn’t dispensing justice — it’s more like the pantomime of justice. That much should be obvious to you — even if the rubes over at Fox News want to get you hooked on indictment dreams all over again.