EDITOR’S NOTE (Nick Stamatakis): Those of you ignoring that most of the “fierce freedom fighters” in Ukraine are neo-nazis have a big problem, you are watching cable news more than you should.  You should educate yourselves on the atrocious “accomplishments” of the Ukrainian Nazis during WWII in Western Ukraine – they killed an untold number of people esp. Jews more than any other fascists in Europe with the exception of Hitler’s concentration camps.  Their offspring are proudly continuing the legacy with similar skills – they have formed the Azov Battalion… Does the name Stepan Bandera tell you anything? Please watch this video and keep in mind that the neonazis in today’s Ukraine, those who our media hailed as “freedom fighters” still celebrate him as a war hero (he was assassinated by the Russians in Munich in 1959).  Should I remind you that the Russians sacrificed 25,000,000 casualties during WWII – more than any other nation – so we can all celebrate victory?

PLEASE EDUCATE YOURSELVES WITH THESE TWO VIDEOS

FACEBOOK WILL TEMPORARILY allow its billions of users to praise the Azov Battalion, a Ukrainian neo-Nazi military unit previously banned from being freely discussed under the company’s Dangerous Individuals and Organizations policy, The Intercept has learned.

The policy shift, made this week, is pegged to the ongoing Russian invasion of Ukraine and preceding military escalations. The Azov Battalion, which functions as an armed wing of the broader Ukrainian white nationalist Azov movement, began as a volunteer anti-Russia militia before formally joining the Ukrainian National Guard in 2014; the regiment is known for its hardcore right-wing ultranationalism and the neo-Nazi ideology pervasive among its members. Though it has in recent years downplayed its neo-Nazi sympathies, the group’s affinities are not subtle: Azov soldiers march and train wearing uniforms bearing icons of the Third Reich; its leadership has reportedly courted American alt-right and neo-Nazi elements; and in 2010, the battalion’s first commander and a former Ukrainian parliamentarian, Andriy Biletsky, stated that Ukraine’s national purpose was to “lead the white races of the world in a final crusade … against Semite-led Untermenschen [subhumans].” With Russian forces reportedly moving rapidly against targets throughout Ukraine, Facebook’s blunt, list-based approach to moderation puts the company in a bind: What happens when a group you’ve deemed too dangerous to freely discuss is defending its country against a full-scale assault?

According to internal policy materials reviewed by The Intercept, Facebook will “allow praise of the Azov Battalion when explicitly and exclusively praising their role in defending Ukraine OR their role as part of the Ukraine’s National Guard.” Internally published examples of speech that Facebook now deems acceptable include “Azov movement volunteers are real heroes, they are a much needed support to our national guard”; “We are under attack. Azov has been courageously defending our town for the last 6 hours”; and “I think Azov is playing a patriotic role during this crisis.”

The materials stipulate that Azov still can’t use Facebook platforms for recruiting purposes or for publishing its own statements and that the regiment’s uniforms and banners will remain as banned hate symbol imagery, even while Azov soldiers may fight wearing and displaying them. In a tacit acknowledgement of the group’s ideology, the memo provides two examples of posts that would not be allowed under the new policy: “Goebbels, the Fuhrer and Azov, all are great models for national sacrifices and heroism” and “Well done Azov for protecting Ukraine and it’s white nationalist heritage.”

Azov’s formal Facebook ban began in 2019, and the regiment, along with several associated individuals like Biletsky, were designated under the company’s prohibition against hate groups, subject to its harshest “Tier 1” restrictions that bar users from engaging in “praise, support, or representation” of blacklisted entities across the company’s platforms. Facebook’s previously secret roster of banned groups and persons, published by The Intercept last year, categorized the Azov Battalion alongside the likes of the Islamic State and the Ku Klux Klan, all Tier 1 groups because of their propensity for “serious offline harms” and “violence against civilians.” Indeed, a 2016 report by the Office of the United Nations High Commissioner for Human Rights found that Azov soldiers had raped and tortured civilians during Russia’s 2014 invasion of Ukraine.

The exemption will no doubt create confusion for Facebook’s moderators, tasked with interpreting the company’s muddled and at time contradictory censorship rules under exhausting conditions. While Facebook users may now praise any future battlefield action by Azov soldiers against Russia, the new policy notes that “any praise of violence” committed by the group is still forbidden; it’s unclear what sort of nonviolent warfare the company anticipates.

Facebook’s new stance on Azov is “nonsensical” in the context of its prohibitions against offline violence, said Dia Kayyali, a researcher specializing in the real-world effects of content moderation at the nonprofit Mnemonic. “It’s typical Facebook,” Kayyali added, noting that while the exemption will permit ordinary Ukrainians to more freely discuss a catastrophe unfolding around them that might otherwise be censored, the fact that such policy tweaks are necessary reflects the dysfunctional state of Facebook’s secret blacklist-based Dangerous Individuals and Organizations policy. “Their assessments of what is a dangerous organization should always be contextual; there shouldn’t be some special carveout for a group that would otherwise fit the policy just because of a specific moment in time. They should have that level of analysis all the time.”

Though the change may come as welcome news to critics who say that the sprawling, largely secret Dangerous Individuals and Organizations policy can stifle online free expression, it also offers further evidence that Facebook determines what speech is permissible based on the foreign policy judgments of the United States. Last summer, for instance, Motherboard reported that Facebook similarly carved out an exception to its censorship policies in Iran, temporarily allowing users to post “Death to Khamenei” for a two-week period. “I do think it is a direct response to U.S. foreign policy,” Kayyali said of the Azov exemption. “That has always been how the … list works.” 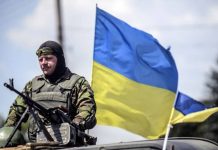