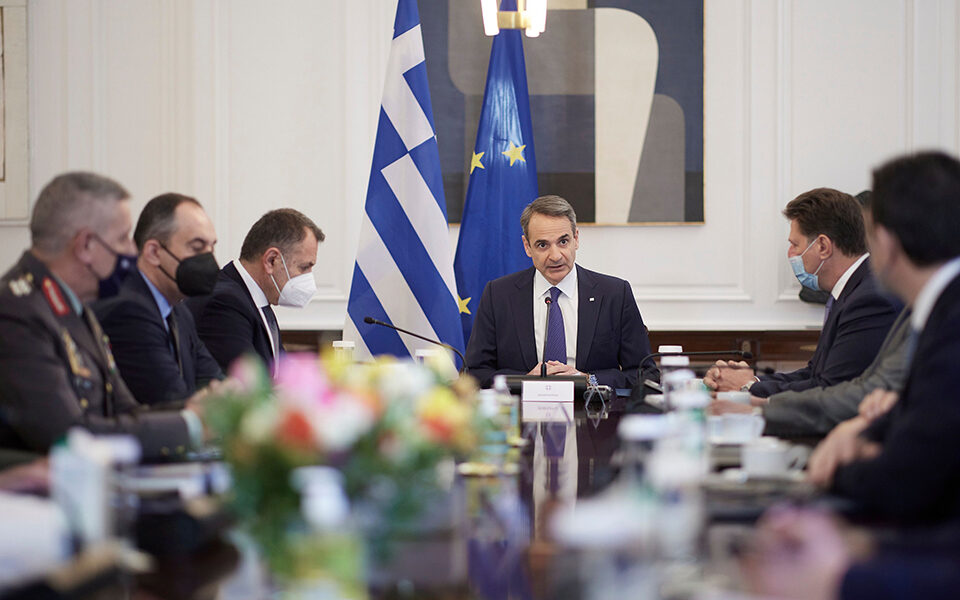 EDITOR’S NOTE (Nick Stamatakis): Helleniscope was probably the first to raise the issue of the Greek minority in Ukraine on a post of January 22, 2022, and point to their risky status.  Most of these 150,000 souls live in Eastern Ukraine, they are Russo-phone and they are Orthodox under the Moscow Patriarchate.  Because of these facts, the Kiyv government never acknowledged “minority status” for them and Pat. Bartholomew never issued a statement of interest – while he “cared” to meet with a representative of the Tatar Turks of Ukraine.  Until we published our post no one else in the Greek media or any branch of the Greek government had recognized the dangers facing this significant historic minority.  Less than a week later, Foreign minister Nikos Dendias visited Mariupol and had talks with Ukrainian authorities about protecting the Greek minority who actually live in the war zone.

On February 15, one Greek was killed and two more were injured from the fire of the Ukrainian Army on the Eastern front. Then, the Greek Foreign ministry recognized the fact and simply issued condolences despite the fact they knew who was to blame – the Ukrainians (here is the story from protothema.gr).  Yesterday, three days after the war started, and while the “fog of war” – and the waves of disinformation from both sides – did not allow a clear picture of what had happened, after 10 Greeks were killed by bombs, Kyriakos Mitsotakis and undersecretary of Foreign Affairs Varvitsiotis came out with quite undiplomatic statements blaming the Russians.  They should both be ashamed… Greece has no interest in taking part in this “hysteria circus”, where the imbeciles who govern the West are ridiculing themselves daily.

The Greeks “summoned the Russian envoy” who of course denied everything – but there was NO proof of any sort that they are to blame. On the opposite, there are plenty of indications, historic and current, that the Neonazis, who are the most vibrant part of the losing Ukrainian Army in the Eastern front, are using civilians as human shields. Why would Greek traitorous politicians rush to take sides? Whose interests are they serving? Not the interests of Greece for sure.  At the same time, Greece decided to sent military help to Ukraine.

Let’s not forget the rich history of failed Greek expeditions in Ukraine.  In 1919 prime minister of Greece Venizelos, in a fatal decision, sent two full divisions of a battle-hardened Greek army to fight in Crimea, while England and France sent fragments of one division combined.  When the battle was lost to the Bolshevic Army, Hellenism paid a huge price: Lenin was so angry with the Greeks that he decided to help Kemal Ataturk with all his power.  The result was the Catastrophe of 1922 and the end of Hellenism in Asia Minor. Those of you, who have family roots there – and I know many among us – you now know the real cause of why your grandparents were expelled from their 2500-old roots…

Mitsotakis should be sensitive to these facts and use the Greek minority along with the Orthodox religion as the justification for Grece’s neutrality.  Instead, he is acting against the interests of Greece…

BELOW THE NEWS REPORT FROM AL-JAZZERA

At least 10 Greek nationals have been killed and six wounded by Russia’s bombing in Ukraine, Greece’s foreign ministry said, adding that it has summoned the Russian ambassador to Greece.

Six people were killed in the Sartana village and four others in Buhas, located about 15km and 65km (9.3 miles and 40 miles), respectively north of Mariupol, the ministry said in a statement on Saturday, adding that there was a child among the injured.

Thousands of Greek expatriates live in Mariupol, the heart of the ethnic Greek community that dates to the 18th century.

Greece is “appalled by and unequivocally condemns the bombing of civilians” by Russia, read the statement which also said the Russian diplomat is expected at the Ministry of Foreign Affairs on Sunday.

The killing came as Ukraine has entered the fourth day of a massive sea, land and air offensive by Russia which has so far killed more than 200 civilians and wounded hundreds.

Just days before the Russian invasion, Dendias had “urgently” raised the protection of the ethnic Greeks in Ukraine during a meeting with Russian counterpart Sergei Lavrov, the ministry added.

French President Emmanuel Macron expressed his solidarity with Greece, saying that “all people of Europe”, and not just Ukrainians, are mourning today.

Translation: “It is not just the people of Ukraine who are mourning today because of the war waged by Russia, but all the peoples of Europe. Tonight we think with sadness of Greece that unjustly lost 10 expatriates who lived in Ukraine near Mariupol.

The Russian embassy in Athens in a statement expressed “deep sorrow” over the deaths, but insisted that Russia was “exclusively” targeting military units and installations in Ukraine.

“We do not bomb inhabited areas and villages, nor any political or cultural infrastructure,” the embassy said, adding that “the Ukrainian army and nationalist Nazi squads have been known for many years to strike against civilians”.

It denied that Russian units were active in the Sartana area on Saturday.

“The Kiev [Kyiv] regime is possibly using the ethnic Greek and other communities living in Ukraine precisely to foment anti-Russian reaction abroad,” it added.

Earlier this month, Athens protested to Kyiv after an ethnic Greek died in a brawl in eastern Ukraine, which Athens blamed on Ukrainian soldiers.

On Friday, Greece closed its embassy in Ukraine’s capital but reinforced its consular presence in the southern city of Mariupol.

Despite historic links to Russia, Greece has condemned the attack and has supported sanctions against Moscow.

Anti-war protests by Ukrainians living in Greece and political parties were also held during the week.

Athens is also willing to provide Poland with “humanitarian and technical assistance” in managing refugees from Ukraine, the Greek migration ministry said.