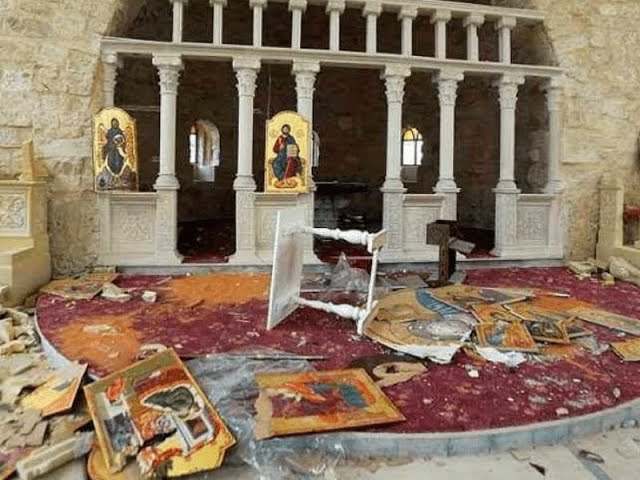 According to a new report published by Greece’s Ministry of Education and Religious Affairs, there were 2,339 incidents of church desecrations in the country between 2015 and 2020, when tiny Greece, seen as Europe’s eastern gateway, was flooded with migrants from the Islamic world. Greek City Times wrote regarding the report:

“There appears to be a correlation between the increase in illegal migration and the incidents of attacks on Greek Orthodox religious churches and religious spaces during the five year period which occurred during the peak of the migration crisis.”

In the most recent year recorded, 2020, there were 385 incidents against Christian churches and buildings, including “vandalism, burglary, theft, sacrilege, necromancy, robbery, placement of explosive devices and other desecrations.”

Over the years, a few of these desecrations made it to English-language media.

In April 2021, Muslim migrants entered into and utterly desecrated a small church. Proud of their handiwork, they videotaped portions of the incident and uploaded it on TikTok. It shows a topless migrant dancing to rap music as he walks towards and inside the church. The next clip shows the aftermath: devastation inside the church, with smashed icons and the altar overthrown.

In 2020, Muslim migrants ransacked and transformed a church into their personal toilet. This public restroom was once the St. Catherine Church in Moria, a small town on the island of Lesvos, which was flooded with migrants who arrived via Turkey. “The smell inside is unbearable,” said a local. “[T]he metropolitan of Mytilene is aware of the situation in the area, nevertheless, he does not wish to deal with it for his own reasons.” The May 2020 report elaborates:

“This is only the latest incident … [I]t has become extremely common for Greek Orthodox Churches to be vandalised and attacked by illegal immigrants on Lesvos….

“As a deeply religious society, these attacks on churches are shocking to the Greek people and calls to question whether these illegal immigrants seeking a new life in Europe are willing to integrate and conform to the norms and values of their new countries.

“These continued attacks have ultimately seen the people of Lesvos, who were nominated for the Nobel Peace Prize in 2016, become increasingly frustrated by the unresolved situation that has restricted and changed their lives as they no longer feel safe on their once near crime-free island.”

While there are many such examples from between 2015-2020 — in 2016, the Church of All Saints in Kallithea near Athens was set aflame by “Arabic speakers” — historically conscious Greeks see a continuum in the Islamic targeting of their churches. As one report on the desecration of Greek churches explains:

“We should remember that Greece spent 400 years under Turkish Islamic rule and that the fight for freedom was bloody. With that in mind it is even more dramatic seeing these images of fighting age migrants desecrating Greek holy places and having no respect for the country they are allegedly seeking refuge in.”

While the report most likely has the 1453 sack of Constantinople (today Istanbul) in mind — when countless Greek churches, including Hagia Sophia, were desecrated, destroyed, or turned into mosques — that pattern is a century older. In 1354, when the invading Turks first achieved a foothold in Europe, in Gallipoli, which was then Greek, “Where there were churches he [Ottoman ruler Suleiman Pasha] destroyed them or converted them to mosques,” writes an Ottoman chronicler.

“Where there were bells, Suleiman broke them up and cast them into fires. Thus, in place of bells there were now muezzins.” Cleansed of all Christian “filth,” Gallipoli became, as a later Ottoman bey boasted, “the Muslim throat that gulps down every Christian nation—that chokes and destroys the Christians.”[1]

Modern Greece, of course, is ultimately experiencing what all European nations that have large Muslim migrant populations are experiencing. All around Western Europe, churches are under attack. This is especially true of the two countries home to Europe’s largest Muslim populations: Germany and France.

According to a 2017 report, in the Alps and Bavaria regions of Germany alone, countless crosses on some 200 churches were attacked and broken: “Police are currently dealing with church desecrations again and again… The perpetrators are often youthful rioters with a migration background.”

Following the arrival of a million Muslim migrants in Germany, a local newspaper noted in 2016 that “not a day goes by” without attacks on crosses and other Christian symbols outside of churches. Before Christmas, in the North Rhine-Westphalia region, where more than a million Muslim migrants reside, some 50 public statues of Jesus and other Christian figures were beheaded and crucifixes broken.

As for France, an average of two churches are reportedly attacked there every day. In one instance in 2019, vandals plundered and used human excrement to draw a cross on the Notre-Dame des Enfants Church in Nimes (smearing fecal matter on churches is not an uncommon Muslim tactic). Although the identities of those targeting churches is often left out of reports — as in February 2019, when “unknown vandals” desecrated and smashed crosses and statues at Saint-Alain Cathedral in Lavaur and mangled the arms of a crucified Christ in a mocking manner — on occasion they appear.

Thus, in 2014, an enraged Muslim man physically twisted a massive bronze cross with his bare hands while committing major acts of vandalism in two churches in France. He also overturned and broke two altars, destroyed Christian statues, tore down a tabernacle, smashed in a sacristy door, and broke some stained-glass windows. Similarly, in 2015, Christian crosses and gravestones in a church cemetery were damaged and desecrated by a Muslim man. After being apprehended, he was described as follows: “The man repeats Muslim prayers over and over, he drools and cannot be communicated with: his condition has been declared incompatible with preliminary detention.” He was hospitalized as “mentally unbalanced.”

The new report by Greece’s Ministry of Education and Religious Affairs makes one thing clear: Greece has become the latest exemplar of “Islam’s Rule of Numbers” — a rule which posits that the more Muslims grow in numbers, the more practices intrinsic to Islam grow with them, in this instance, the desecration of Christian churches. In Nigeria alone, for example, Muslims have torched or destroyed some 20,000 churches over the last decade.

Raymond Ibrahim, author of Sword and Scimitar, Fourteen Centuries of War between Islam and the West, is a Distinguished Senior Fellow at the Gatestone Institute, a Shillman Fellow at the David Horowitz Freedom Center, and a Judith Rosen Friedman Fellow at the Middle East Forum.