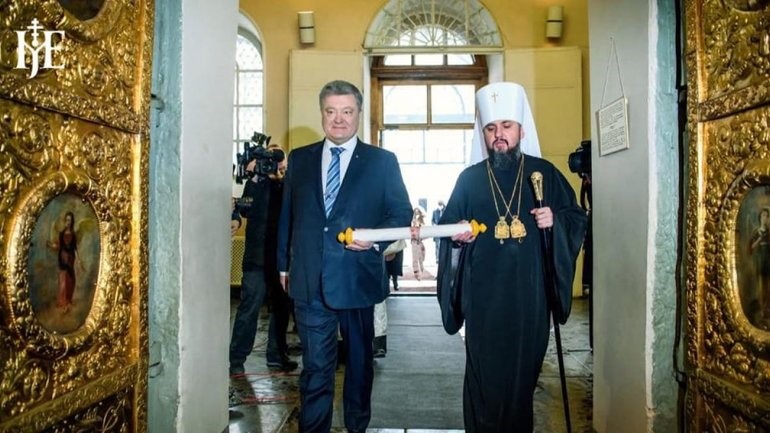 In firing two Moscow Patriarchate (MP) priests, it seems Patriarch Theodoros II is doing Bartholomew’s dirty work.  It’s heartbreaking to see him misquoted, as some of the things that reportedly came out of his mouth don’t sound like him at all.

Instead, they sound like one of Bartholomew’s flunkies.  I say “flunkies” because he (or they) don’t know Theodoros II and judging by the animosity, they don’t know the Church.

And he knows it.  Disappointment doesn’t begin to cover it.

With respect to Bartholomew, he does not want to go to war with the MP on his own ground.  Like a terrorist who uses a child as a shield, he shoved Uriah (oops, meant Theodoros II) to the front lines knowing he wouldn’t survive it.

The rest of us?  When it comes to the Church, I think everyone assumed Antioch and Jerusalem wouldn’t fall.  Alexandria was the lynch pen.  Theodoros II always said he wanted unity.  If he had just repented and held on, we might have survived this thing as one Church.

The focus on Alexandria bought Bartholomew some time.  He can’t afford a scandal in Constantinople proper, lest some politician, the Pope, or a three-letter agency in the U.S. question whether he speaks for the entire Church or not (not even close).

Given that there are less than one-tenth of 1% Orthodox Christians (Wikipedia) in Constantinople, (Turkey pop = 85,816,125 as of 2/18/22), I’m guessing that maybe a few thousand are under Bartholomew.  The rest are Russians.

I’ll acknowledge Bartholomew’s got a lot of metropolitans and other clergies in various and sundry places that both exist and do not exist, so they’re hard to count.

We can’t count America, because many of the Orthodox jurisdictions do not belong to the GOA, nor will they ever belong to the GOA.  The good Archbishop has seen to that.  Rather than grow, the GOA has entered a steep decline that one can only partially blame on the pandemic.

And why shouldn’t they?  They don’t live in Greece.  They live in America and though they may not know it, they are right to rebel because a Church is to speak the language of the locale; the territory where the Church resides.

We certainly can’t count the OCU, as they’re, well, schismatic.  They were not ordained by the canonical Church.  Their previous ordinations were erased or never existed.  Their status is “deposed,” like their fathers who came before them were deposed, and the children who will come after them, deposed.

When given the opportunity, they refused ordination, wanting nothing to do with the canonical Church if it included Russia, paradoxically, the one country that can boast the greatest number of Orthodox Christians.

Even the OCU’s sponsor is non-canonical.  He is instead the consummate politician; a “Godfather, if you will, who couldn’t care less about apostolic succession.

(He is seen in our main photo carrying the Tomos with his Godchild, Epiphany.  Lord have mercy.)

In the final analysis, the OCU is a questionable “church” with men from a questionable background, who were deposed by the canonical Church and have, thus far, refused to repent.  They are people who have chosen to live scandalous lives over striving for Christian life with a Christian ending:  painless, blameless, and peaceful; and a good defense before the dread judgment seat of Christ.

So, with a largely defunct patriarchate, courtesy of the introduction of a schismatic church, Bartholomew has been discredited by everyone but Greece, Cyprus and Alexandria, and has managed to winnow the Church to the point where we wonder if Christ could still be in charge.  (Thankfully, we know He is and we know He will act.)

In looking at the most recent example of where Bartholomew stands, I am not optimistic the Church, as we know it today, will exist tomorrow.  The pruning is about to begin and not a moment too soon.

February 18, 2022, the Ecumenical Patriarch took a little vacation to his RC monastery in Salzburg.  As you may recall, the Pope gave Bartholomew (personally) some seed money to build such a monastery a few years back. 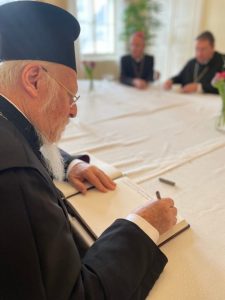 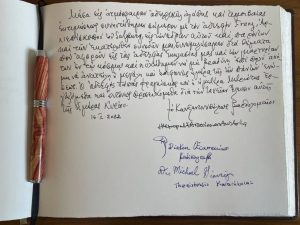 On his visit, he wrote the following in the guest book: “. . .  the great and famous day of the union of all should not be delayed for too long. Brother Pope Francis and my mediocre self are working hard and praying fervently for the speedy arrival of this day of the Lord.”

We’ve got a tail wagging the dog situation here, where the dog is frantically running around in circles trying to bite off his tail.  One day it’s going to happen, and the dog will free himself from his impervious tail.

God willing, that will be the day we free ourselves from Bartholomew.