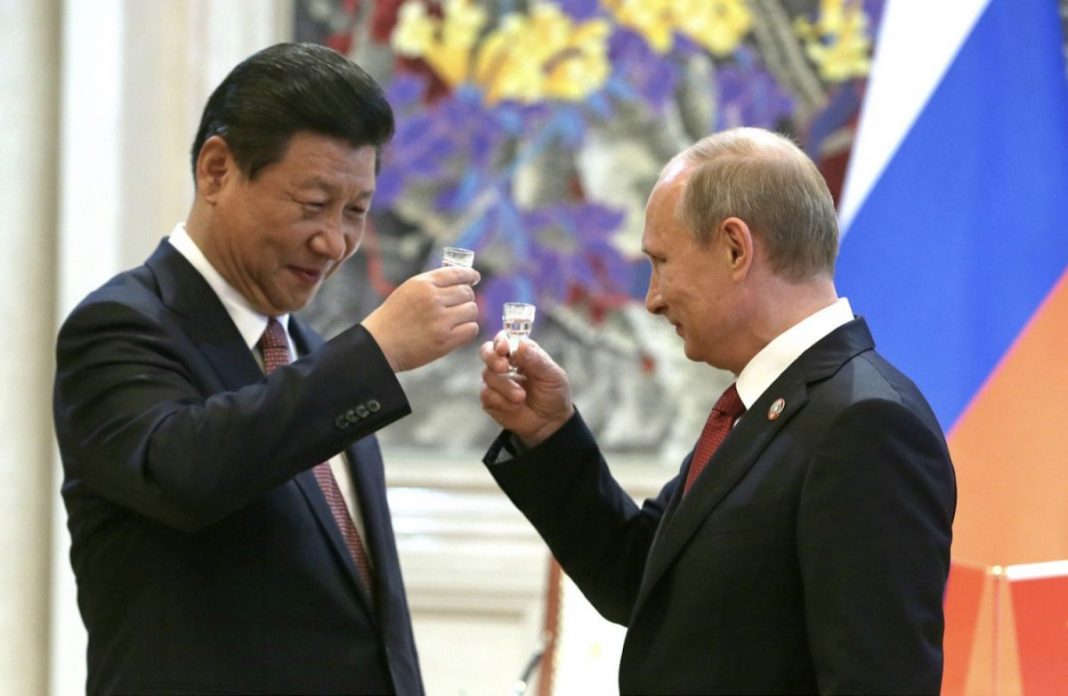 By David Goldman – the Federalist

This is the sort of move that gives “Pyrrhic victory” a bad name.

Washington has backed Putin into a corner, forcing him to take drastic measures to protect Russian minorities in Ukraine. That in turn forced Europe’s leaders into Washington’s camp, and within 48 hours, the European discourse has shifted away from economic cooperation with Russia to a possible boycott of Russian gas.

Putin will sell the gas to China, which last month proposed to construct a pipeline that would increase Russia’s deliveries tenfold. More importantly, Russia’s considerable scientific and engineering resources—by some measure on par with those of the United States—will be put in the service of China’s high-tech industry.

Washington maneuvered Russia into the crisis. Putin was willing to negotiate the status of the Russophone districts of Eastern Ukraine under the 2015 Minsk protocols brokered by the French and Germans, and signed by Ukraine, Germany, France, Russia and representatives of Luhansk and Donetsk, the rebel provinces.

The Ukraine government—with American instigation—abandoned an agreement that would have guaranteed the rights of the Russian minority within a sovereign Ukraine, as Steve Bryen reported in these pages on February 21.

Washington and London, Bryen emphasized, “think a Minsk-based deal would lead to the ‘Finlandization’ of Ukraine. Behind the scenes, it is quite clear, by omission and commission, that Washington has let the Ukrainians believe that Minsk II is off the table – although the US was never a party to Minsk II.”

After Kiev, goaded by Washington, rejected a limited autonomy for the Russian districts within a sovereign Ukraine, Putin recognized their independence.

There is a history behind this which Western governments and the media find it convenient to forget. As Putin revealed in his 8,000-word speech on February 21, he had proposed in 2000 to then-president Bill Clinton that Russia might join NATO. Russia had nearly gone bankrupt in July 1998, its economy was in shambles and its military was demoralized.

Clinton rejected Putin’s proposal out of hand. Flush from its victory over the Soviet Union in the Cold War, Washington believed it had the power as well as the moral authority to remake the world according to its own utopian, “end of history” vision.

In 2004 the United States sponsored the so-called Orange Revolution in Ukraine. I wrote in 2008: “On the night of November 22, 2004…. Vladimir Putin watched the television news in his dacha near Moscow. People who were with Putin that night report his anger and disbelief at the unfolding ‘Orange’ Revolution in Ukraine. ‘They lied to me,’ Putin said bitterly of the United States. ‘I’ll never trust them again.’”

In 2007, the United States backed a quasi-terrorist criminal organization, the Kosovo Liberation Army, as the kernel of a new state in Serbia’s Kosovo province, without much worry about the niceties of national sovereignty or international law. I wrote in 2007 (“The Inconvenient Serbs”):

“The Bill Clinton administration, in this writer’s considered view, provoked NATO’s 1999 bombing war against Serbia with malice of forethought, as a gesture to the Muslim world. The United States in effect was willing to bomb Christians in order to protect Muslims, in this case the Albanian Kosovo majority whom it accused the Serbs of mistreating. That is precisely what the Democrats say… Democratic Senator Joseph Biden contended that Kosovo independence would constitute a “victory for Muslim democracy,” and “a much-need example of US-Muslim partnership.”

Clinton rejected the idea out of hand. In 2007, the George W Bush administration similarly rejected Russian and Serbian proposals to partition Kosovo, that is, allowing the Christian majority portions of northern Kosovo to join Serbia. Instead, the Muslim paramilitaries to whom the US gave control of Kosovo forced 200,000 Christian Serbs to leave the province.

In 2014, then-assistant secretary of state Victoria Nuland stage-managed the Maidan Coup against Russian ally Viktor Yanukovych, and was caught red-handed on a mobile phone call taped and published by the Russians, famously expostulating, “F—k the EU.”

Nuland saw Yanukovych’s overthrow as a prelude to Putin’s own downfall. Months later, Nuland bragged to a Congressional committee that the United States had spent $20 billion promoting regime change in Russia.

Washington’s agenda hasn’t changed; it wants the expansion of NATO up to Russia’s border and a liberal pro-American regime in Moscow. As Secretary of State Antony Blinken declared to the media at a January 7 State Department briefing, “NATO never promised not to admit new members. It could not and would not – the ‘open door policy’ was a core provision of the 1949 North Atlantic Treaty that founded NATO.”

As I reported on February 21, German media released documents from the British archives proving that the US, German, France and Britain had indeed promised Russia in 1991 that NATO would not expand to the East if Russia withdrew its troops from Eastern Europe.

What has changed is the position of Russia and China.

Putin abandoned Russia’s Serbian allies in 1999 and 2007 because it had no means at its disposal to help them. The Russian military was in no condition to threaten NATO, and the Russian economy was still limping away from the post-Communist shock that had pushed its inflation rate into triple digits for much of the 1990s. China was in no position to help Russia.

Today Russia has a current account surplus equal to 5% of GDP, $630 billion in foreign exchange reserves and a modernized military that has no credible opposition on the European continent.

In China it has a trading partner with an unlimited appetite for its hydrocarbons, which can be delivered overland far from possible interference by the US Navy. And it has a partner in China for high-tech R&D and industrial investment.

Huawei has one of its largest research facilities in Moscow, with plans to train 50,000 technicians at five Russian research centers. The Chinese telecom giant is building Russia’s mobile broadband network, but its partnerships in Russia extend to cloud computing, video surveillance and facial recognition, and other artificial intelligence applications.

“As the Ukraine crisis deepens, it has been widely reported that the Biden administration is considering technology sanctions on Russia – specifically with regard to semiconductor chips,” wrote Tom Fowdy in the Russian news site RT.com on January 26.

“By weaponizing its position in the semiconductor value chain, the US would essentially be repeating the action it took against Chinese telecommunications firm Huawei, but this time targeting an entire country…

“As a result, it is pivotal that Russia and China work together in this domain. Already, there is growing collaboration in strategic technologies in a number of areas, including aviation, military, and space, as a result of the challenge posed by the US. But semiconductors also need to be in the picture.”

Putin wanted Russia to join NATO. He wanted to be part of the West. His most effective opposition comes not from the sort of liberals who play well on the American speaking circuit, but rather from “Eurasian” reactionaries like Aleksandr Dugin of the “National Bolshevik Party,” whose politics are consistent with its historically allusive name.

But the West has pushed Putin into an alliance with China. It is perhaps the dumbest thing the Western powers have ever done. It could be the last.