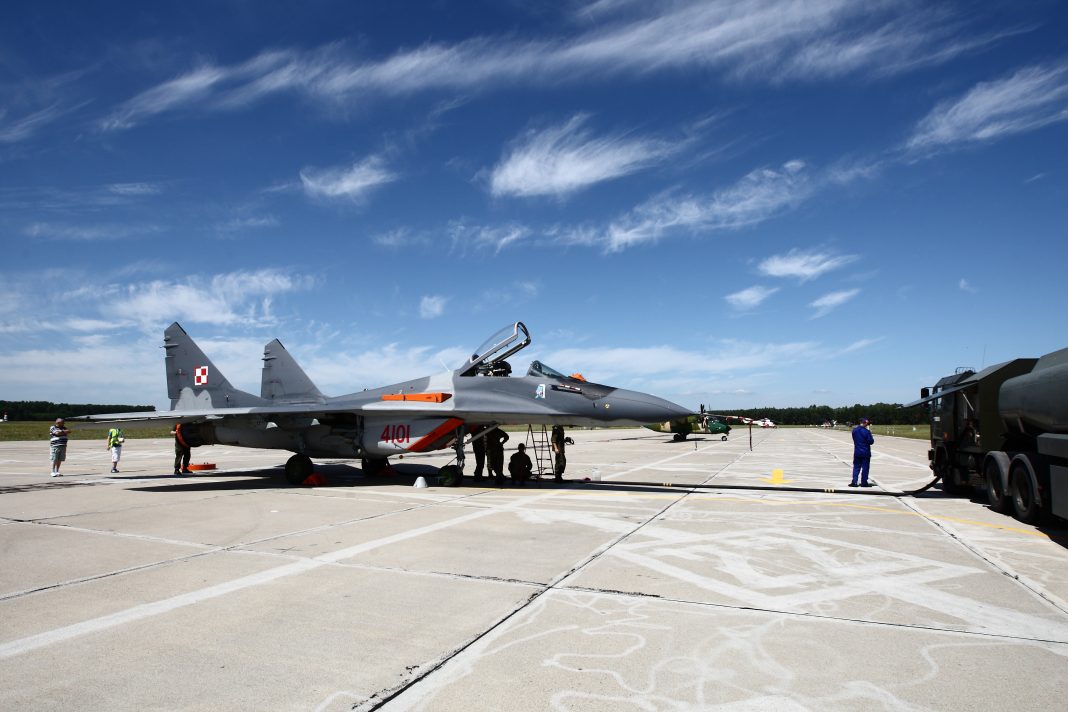 EDITOR’S NOTE (Nick Stamatakis): What a joke!.. We have been hearing for days – from the mouth of Secretary of State Blinken – that NATO counties “have the OK” to send fighter jets to Ukraine.  The main issue was around Poland’s 28 Mig-29 jets that were available with major renovations… But the Polish government got Putin’s message: “If these jets fly to Ukraine from your land then you are a target!” And so they officially announced that they are willing to send them to Rahmstein US Base in Germany!!  And then suddenly US changed its stance and said that they have no policy of sending jets to Ukraine!! A total humiliation of the US and NATO….

Even more ridiculous is the fact that their possible arrival to Ukraine would have made “0” difference and they would be likely downed in a day or two… Oh, wait, Kamala-sutra Harris is on her way to Poland as we speak to straighten the situation out!! Unbelievable imbeciles!!

BELOW IS THE NEWS FROM GATEWAYPUNDIT

The Biden Administration is a joke from top to bottom.

Today, Poland announced it would release “immediately and free of charge” its entire MiG-29 fleet of 28 aircraft to the United States for transfer to Ukraine. The transfers would take place at Ramstein Air Base in Germany.

“I was in a meeting where I ought to have heard about that just before I came (to a Senate hearing), so I think that actually was a surprise move by the Poles.”

—US Undersecretary of State, Victoria Nuland

How could two NATO Allies be this disconnected and out of touch? Simple: Antony Blinken tried to shift blame for Ukraine’s lack of weapons to Poland, and Poland called his bluff.

Polish Government Calls Antony Blinken a Liar
US Secretary of State Antony Blinken said today on CBS News that the US has agreed to backfill Poland with F-16s, allowing to Poland to lend a fleet of MiG-29s to Ukrainian pilots. The Polish MiGs would, in Blinken’s scenario, fly combat missions out of Polish Air Force bases because all MiG-cabable airports in Ukraine have been destroyed…

Well, I made a mistake or wasn’t clear about the timetable. Blinken claimed that he was working with Poland to transfer its MiGs to Ukraine after he’d already met with the Polish Prime Minister who rejected the idea. Poland doesn’t want to get into a shooting war with Russia, especially while hosting a million Ukrainian refugees. But Blinken, wanting to look tough, told CBS News the transfer was in the works.

Poland, likely disgusted at Blinken’s lie, basically said, “Alright, America, you can have the planes.”

By transferring the planes to the US on a US air base, Poland can wash its hands of the deal. If the US, in turn, hands the planes over to Ukraine and offers Ramstein as a launching pad, Russia’s beef is entirely with the US.

In other words, Poland humiliated the US and exposed Blinken as a liar.

Blinken’s underhandedness was further exposed by the Pentagon. Spokesman John Kirby said about the proposal (via Fox News:

“It is simply not clear to us that there is substantive rationale for it,” he said in a statement. “We will continue to consult with Poland and our other NATO allies about this issue and the difficult logistical challenges it presents, but we do not believe Poland’s proposal is a tenable one.”

Of course, it’s not tenable. Russia already said that it would retaliate against any country that allowed Ukraine to use its airports to launch combat missions. The Pentagon was obviously never onboard with the plot, which must have been dreamed up by the State Department without consulting any other government department. For that matter, Blinken didn’t even discuss it in depth with Poland.

“The prospect of fighter jets ‘at the disposal of the Government of the United States of America’ departing from a U.S./NATO base in Germany to fly into airspace that is contested with Russia over Ukraine raises serious concerns for the entire NATO alliance,”

Exactly what I said Sunday.

And that’s not the only humiliation for the US and its adolescent administration today. The Wall Street Journal reported that Saudi Arabia and United Arab Emirates rejected numerous calls from Joe Biden in the last two weeks while taking calls from Vladimir Putin.

Which reminds me of something we shared last night:

In for a shock, indeed. In essence, Sindreu’s piece argues that this move substantially increases the risk that the US dollar loses its privileged status as the global reserve currency and, at a minimum, likely ensures a polarization of the global economy into at least two camps – the West in one and Russia/China/Iran/Saudi Arabia plus other targeted or aligned countries in the other.

The WSJ story seems to confirm that Saudi Arabia is firmly on Team Putin and not on Team Biden. Now we know why Biden’s pleading for more oil have been ignored since last August. The POTUS is no longer Number One the Crown Prince’s speed dial.

Things are unraveling quickly. You won’t hear much more about the Polish MiG humiliation in the press unless the US decides it now must find a way to get those planes into combat.The same way the Biden Administration felt compelled to ban Russian oil imports after denying that was possible.

The Biden Administration has alienated its NATO Allies that’s geographically closest to the conflict—the one bearing the lion’s share of the refugee crisis, and the one Russia could most easily. In the process, it managed to drag Germany into the affair. European allies are surely taking notice and wondering if they should stay in a mutual-defense alliance with a country headed by a lifelong idiot who now has dementia. They’ve met is number two and laughed her off the stage. At what point does NATO tell the US it’s no longer welcome in the club? With the USD potentially losing reserve status, NATO might be better off without our money. Do Germany and Poland think they can wait until the next election while there’s a war raging in their hemisphere?

Biden is bumbling his way into World War III the way he bumbled out of Afghanistan. But the potential price to be paid by a mistake in Europe is far larger than the costs of the Afghanistan debacle. The Taliban have no nukes; Putin does. We had no mutual defense pact with Afghanistan; we do with Poland and Germany.

When Robert Gates said Joe Biden has “been wrong on nearly every major foreign policy and national security issue over the past four decades,” he meant it. But if Biden bumbles this one, it will be his last mistake—and ours.