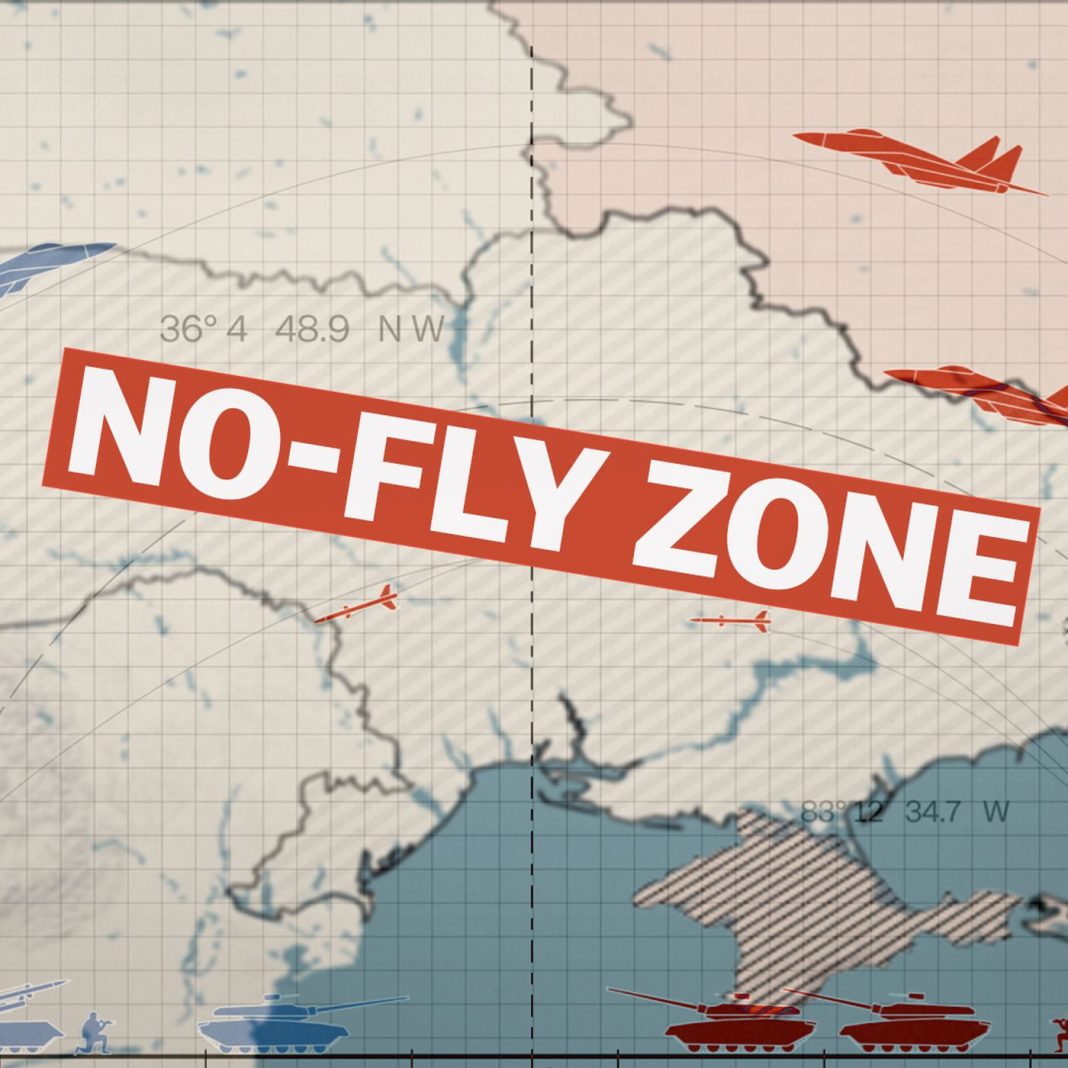 EDITOR’S NOTE (Nick Stamatakis): Ten days ago we had a special post presenting proof that “ALL TOP Foreign Policy Experts Agree: US/NATO Provoked Ukraine War!!!” Yet the corrupt western media guided by the establishment kept pressing their own stupid narrative about “the thug Putin” with total disregard for the truth… Today we are presenting even more evidence from one of the most prestigious foreign policy magazines, that “Most Experts Oppose No-Fly Zone Over Ukraine” OVERWHELMINGLY.  Yet, the corrupt DC swamp led by both Democrats and Republicans, is ready to send aircraft and other help to Ukraine…  What do they care that this military aid will not even reach there in time and even if it does it will be destroyed?… But they should care if by their idiocy they start a war with a major nuclear power, Russia… Which power, instead of wasting its defense budget (only $60B or 8% of the $800B US defense budget) as they did in DC, used it to create the most formidable missile and missile defense systems in history…

Experts do not matter for the Swamp… Only the theatrical performances of supposed, non-existent, “strength”… The swamp idiots will not stop until they destroy America faster than anyone expected…

Ukrainian President Volodymyr Zelensky has garnered widespread sympathy for his country’s cause. His courage in leading Ukraine in the face of the Russian invasion has drawn comparisons to figures from Winston Churchill to George Washington. On Wednesday, Zelensky appeared via video link before a joint session of the U.S. Congress, where he reiterated his now familiar plea to the United States and NATO to “close the sky over Ukraine” and enforce a no-fly zone.

MORE ON THIS TOPIC

In the immediate aftermath of Russia’s invasion on Feb. 24, polling found that the U.S. public strongly endorsed the use of U.S. air power to limit further Russian airstrikes in Ukraine. Although public support for the policy has somewhat declined in recent days, some U.S. legislators still advocate the establishment and enforcement of a no-fly zone. Estonia, which shares a border with Russia, became the first NATO member to pass a resolution calling for a no-fly zone on Monday.

Despite these calls, U.S. President Joe Biden and his advisors have consistently rejected the idea of a NATO-enforced no-fly zone over Ukraine. They argue that the policy would lead to direct combat between U.S. and Russian forces and risk uncontrollable escalation—the “exact step that we want to avoid,” as White House press secretary Jen Psaki said on March 3. Last Friday, Biden underscored this view. “We will not fight a war against Russia in Ukraine. Direct confrontation between NATO and Russia is World War III, something we must strive to prevent,” he said.

International relations (IR) experts overwhelmingly agree with Biden. The Teaching, Research, and International Policy (TRIP) Project at William & Mary’s Global Research Institute asked IR scholars at U.S. universities and colleges for their views on the use of U.S. air power to enforce a no-fly zone over Ukraine. The results reported below are based on responses from 866 respondents surveyed between March 10 and 14. (Complete results can be found here.)

You can support Foreign Policy by becoming a subscriber.

These experts are nearly unanimous in their opposition to the establishment and enforcement of a no-fly zone over Ukraine. Respondents reject a U.S.-enforced no-fly zone because they fear it raises the risk of escalation, including the likelihood of a Russian nuclear attack against Ukraine or NATO countries.

IR experts say “no” to a no-fly zone

When asked whether the United States should respond to the Russian invasion of Ukraine by imposing a no-fly zone over Ukraine, just 7 percent of respondents agreed. Large majorities supported other U.S. policy responses, including sanctions against the Russian government and its leaders, resettling Ukrainian refugees in the United States, sending military supplies to Ukraine, banning oil and gas purchases from Russia, and deploying more military forces to the region.

The only U.S. policy response less popular than a no-fly zone was a more general military campaign against Russian forces. Support for cyberattacks against Russian forces was also quite low, with just 29 percent of respondents backing the idea. Overall, the message is clear: IR experts are generally unwilling to support U.S. policy responses that Russia may perceive as escalatory.

In the nearly 20 years that the TRIP Project has surveyed IR scholars, no contemporary policy question of significant consequence has generated this level of agreement. Overwhelming opposition to a U.S.-imposed no-fly zone holds irrespective of academic rank, gender, theoretical framework, regional area of expertise, or subject area of expertise.

The IR experts’ responses contrast with polling of the U.S. public, which has expressed broad and bipartisan support for a no-fly zone. In a Reuters/Ipsos survey conducted on March 3 and 4, 74 percent of those surveyed said they would support a no-fly zone over Ukraine, while subsequent polls suggest lower but still substantial support. A CBS News/YouGov poll conducted between March 8 and 11 showed that 59 percent of people said they would support a no-fly zone, while 41 percent were opposed.

Meanwhile, some U.S. policymakers have joined public calls for a no-fly zone. Sen. Roger Wicker and Rep. Adam Kinzinger, both Republicans, have endorsed the idea, while Sen. Lindsey Graham has said he would support such a measure if Russia used chemical weapons in Ukraine. On March 8, 27 former diplomats and foreign-policy heavyweights published an open letter calling for a limited no-fly zone to protect humanitarian corridors. Another letter, with 78 signatories, opposed the creation of a no-fly zone.

Although these dueling letters may leave the impression that foreign-policy experts are divided over the issue of a no-fly zone over Ukraine, our survey—which includes the views of a much larger sample of IR experts—shows overwhelming consensus that it is a bad idea.

What are the potential consequences of a no-fly zone?

Why are IR scholars so opposed to the United States creating a no-fly zone over Ukraine? Responses to subsequent questions in our survey show that experts worry about the increased risk of escalation of such a policy. If the United States chose to enforce a no-fly zone, it would almost certainly do so with its NATO partners. We asked respondents to consider Russia’s tactical response to such a NATO-enforced no-fly zone. They judged that, among other consequences, it would substantially increase the risk of a Russian nuclear attack against Ukraine or NATO countries.

Respondents were first asked about the likelihood that Russia would adopt various tactics against Ukrainian or NATO targets in the next 30 days, assuming that NATO does not establish a no-fly zone over Ukraine. These experts were then asked to consider a world in which NATO immediately established and enforced a no-fly zone and to estimate the likelihood that Russia would employ the same tactics. The results are striking.

IR experts estimated that establishing a no-fly zone would increase the probability that Russia would employ nearly every military escalation tactic we asked about, from the use of chemical or biological weapons against Ukrainians to the use of nuclear weapons against NATO countries. The most dramatic difference concerned expectations of the use of conventional weapons against NATO countries. Respondents said a no-fly zone over Ukraine would nearly triple the odds of a conventional confrontation between Russia and NATO, from an estimated 23 percent to 64 percent.

The most significant consequence for international politics relates to the odds of Russia using weapons of mass destruction. IR experts anticipated the use of chemical, biological, or nuclear weapons against Ukraine and NATO countries to be higher if NATO established a no-fly zone over Ukraine. The use of such weapons would increase the probability that the war spreads beyond Ukraine’s borders.

Respondents judged that a no-fly zone would essentially double the risk of a nuclear attack by Russia against a NATO country, from an estimated 9 percent to 22 percent. The effect of a no-fly zone on the likelihood of a nuclear attack against Ukraine is smaller—increasing from an estimated 19 percent to 27 percent—primarily because respondents start from a higher baseline.

The single case in which IR experts did not estimate that a no-fly zone would increase the risk of escalation involved Russia conducting massive and deliberate conventional strikes against Ukrainian population centers. Respondents judged this outcome to be likely regardless of whether NATO enforces a no-fly zone, presumably because many scholars assume that Russia already employs such tactics. Although not definitive, this result suggests that scholars do not think a NATO-enforced no-fly zone would effectively prevent Russia from targeting civilians.

IR scholars think Moscow is likely to use military force, but they suggest Washington should exercise restraint.

We followed up by email with several experts who indicated they were willing to explain the reasoning for their survey responses. Nina Tannenwald, a senior lecturer at Brown University, added some historical context for the argument that a no-fly zone risks major-power war. “This would mean direct combat between U.S. and Russian forces, something that we strenuously avoided during the Cold War because it is an extremely dangerous situation that could escalate to the use of nuclear weapons,” she wrote.

IR scholars acknowledge the magnitude of the crisis in Ukraine, but they reject a no-fly zone as a solution. As the University of Minnesota professor Tanisha Fazal wrote, “The natural impulse is to want to help. The consequences of a no-fly zone, though, could be disastrous for Ukraine’s neighbors … and even more disastrous for Ukraine itself. Direct confrontation between nuclear-armed powers is something to be avoided.”

IR scholars who study armed conflict also question the efficacy of a no-fly zone. Stacie Goddard, a professor at Wellesley College, wrote, “It might be worth taking the risk of escalation if doing so would prevent the targeting of civilians, but it won’t. A no-fly zone is also ineffective, because Russia is relying primarily on artillery, cruise missiles, and ballistic missiles—not its air power—to hit civilian targets.”

Finally, Erica Chenoweth, a professor at the Harvard Kennedy School, wrote to explain the legal status and political effects of such a policy. “A no-fly zone would also have to be imposed ‘illegally.’ Russia would use its veto on the U.N. Security Council to prevent a resolution that would authorize such a measure, and overriding the [council] would weaken the overwhelming condemnation of Russian aggression among other U.N. member nations,” she wrote.

As the costs of the war increase and if Russia makes notable advances on the battlefield, calls for a no-fly zone over Ukraine will almost certainly increase within the United States and beyond. However, IR and security experts remain remarkably unified in their view that the United States and its NATO allies should avoid risking World War III by directly engaging Russian aircraft over Ukraine and Russian anti-aircraft assets in Ukraine, Russia, and Belarus. Their expert knowledge makes them unlikely to waver in their opposition to a no-fly zone, even as the situation on the ground in Ukraine worsens.