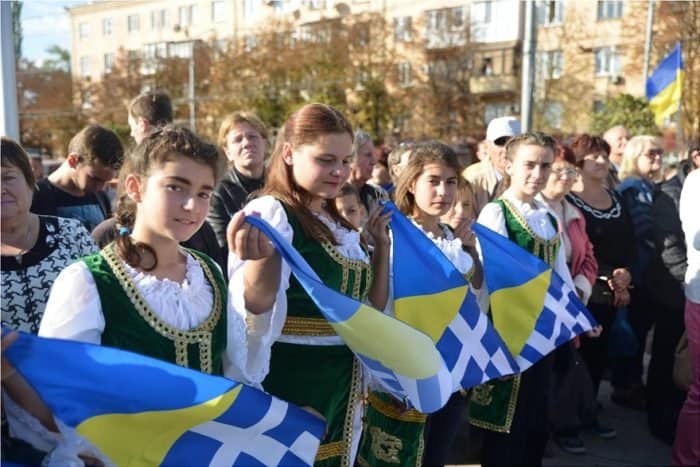 The GOA and IOCC set up a Ukraine Relief Fund. On March 9th, the GOA held a joint church session with the Ukrainian Orthodox Church (https://greekreporter.com/2022/03/09/greek-ukrainian-orthodox-leaders-us-joint-prayer/). No mention of the suffering Greeks of Mariupol at the mercy of Nazi Ukrainian Azov Battalion. The battalion, which is part of the Ukrainian Army, has been killing Russians and other non-Ukrainians since 2014 (The total human losses exceed 14,000!!)

I remember attending the SAE (World Council of Hellenes Abroad) conference in 1999 and 2001 in Thessaloniki, Greece. At that time, the PASOK regime in Greece spent millions on our airplane tickets, hotels, food, and bouzouki parties. I’m glad I attended because I created friendships with Greeks from Ukraine, Russia, Bulgaria, the Republic of Georgia, etc. We were all the same age, but they were more proud to be ethnic Greek than the Greek Americans! They spoke better Greek than Greek Americans.

The majority of the Greeks of Ukraine, Russia, etc. are Pontian Greeks. They fled the Greek Genocide of 1914-1923 across Anatolia.

It is bad enough that the Soviet Communists killed over 30,000 Greeks in Communist Gulag camps in Siberia. The Communists deported another 250,000 Greeks from Ukraine to Central Asia Republics.

Mariupol is a warzone. God knows how many Greeks of Mariupol have been murdered by the Nazi Ukrainian Azov Battalion. The Azov Battalion has been waging a genocide of non-Ukrainians (Russians/Greeks/others) in Mariupol, and the two new independent Republics of ex-Ukraine since 2014. There is a blackout on google, Facebook, youtube, fake news media about the Nazi origins of the Azov Battalion/Ukrainian government/etc. Oliver Stone’s “ Ukraine on Fire” 2014 documentary is nowhere on youtube or mainstream platforms. Stone reveals the Nazi origins of the coup d’etat/Ukrainian criminal government regime.

We all know that the Greek government that occupies Athens, Greece are all paid puppets by the George Soros Globalist elites. I wrote a past piece how Alexis Tsipras, Kyriacos Mitsotakis met with George Soros in 1999. The Greek mainstream media channels are all paid agents promoting the Globalist agenda. They rule Greece with an iron fist, as was evident by the covid tyranny.

Shame on all Greek American Democrat Establishment elites who try to go with the Deep State narrative on Ukraine. Shame on the Greek Orthodox Church of America and the IOCC. They remain silent on the Greeks of Mariupol and Ukraine.

Why are they fueling the fire for WWIII?

Why do many cities have Greek names across Ukraine?

New Democracy is a Globalist Party