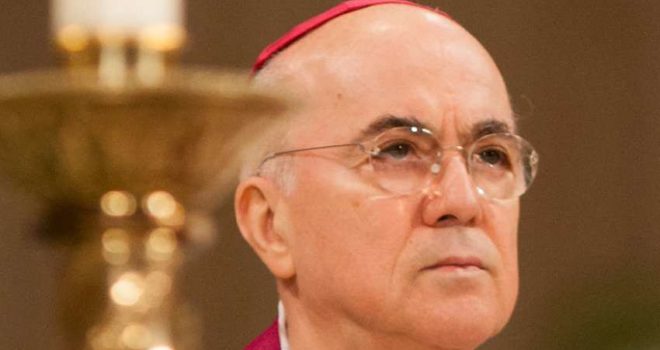 EDITOR’S NOTE (Nick Stamatakis).  Says Archbishop Vigano in his declaration on Ukraine: “Perhaps Providence has ordained that Moscow, the Third Rome, will today in the sight of the world take on the role of κατέχον (2 Thess. 2:6-7), of eschatological obstacle to the Antichrist.” The author of this interesting article below criticizes Archbishop Vigano for having political motives, without first explaining that both Pope Francis and Pat. Bartholomew have already displayed, not only their political motives in this current war but also their complete alliance with the New World Order and the powers who have as a goal to eliminate Christian faith as we know it and traditional Christian values, such as the concept of the family.

It is no secret that there are greater moral issues hiding behind the war between Russia and the West. Please follow this link to see how Russia is about to establish a mechanism for moral censorship.  Says the Russian leadership – as it faces censorship from the West: “We state that traditional spiritual and moral values are the basis of the Russian civilization, and intentional infringement on them should be regarded as a threat to national security. . .”  Those of you who are interested to delve deeper into the history of religious schisms and what brought us to the current war against Orthodoxy you can link to this long but very informative article by Walt Garlington for the Saker Blog…

The statement by the Russian intellectual, religious and political leadership brings to the forefront the real issues behind this war.  Let’s not forget that the roots of this conflict were clearly stated by Samuel Huntington in his now-famous “Clash of Civilizations” book (1996), which is required reading in the first semester of ALL Western graduate programs in diplomacy and international relations. We can say with confidence that this book has the place of the Bible in the State Department. On page 37 of this book (and elsewhere), Samuel Huntington describes (the right word is: prophecies) with extraordinary clarity the events happening in Ukraine today and during the last decade.  Make no mistake: This War was initiated by the West theoretically, politically, and militarily at least 25 years before Putin ordered the invasion of Ukraine…

Let me close by noting that the West has managed to unify the Asian continent (and Africa and Latin America) in this moral War as the Chinese, Indian and Muslim leadership – and much of the rest of the world – speak almost in one voice when denouncing the moral decadence of the western civilization… More than any economic or military conflict, it will be this cultural conflict that will bring down the edifice of the western civilization…

Before you start reading this article, please do me one favor. Forget everything you’ve read about Archbishop Viganò’s latest “declaration” on Ukraine. Let’s not talk about his views on geopolitics, whatever their merits. Politics don’t matter. The only thing that matters is getting ourselves right with God, and God is an absolute monarch. There are no politics in His kingdom. That’s why we call it “Heaven.”Let’s talk instead about Archbishop Viganò’s views on the Church, which matter quite a bit more in the final analysis. In this new “declaration,” His Excellency makes an astonishing claim:

The world crisis with which the dissolution of traditional society is being prepared has also involved the Catholic Church, whose hierarchy is held hostage by apostates who are courtiers of power. There was a time in which popes and prelates confronted kings without concern for human respect, because they knew they spoke with the voice of Jesus Christ, the King of kings. The Rome of the Caesars and popes is now deserted and silent, just as for centuries the Second Rome of Constantinople has also been silent. Perhaps Providence has ordained that Moscow, the Third Rome, will today in the sight of the world take on the role of κατέχον (2 Thess. 2:6-7), of eschatological obstacle to the Antichrist. If the errors of Communism were spread by the Soviet Union, even to the point of imposing themselves within the Church, Russia and Ukraine can today have an epochal role in the restoration of Christian civilization, contributing to bringing the world a period of peace from which the Church too will rise again purified and renewed in her ministers. (emphasis added)

Let’s break that down. The Catholic Church is led by “apostates.” What’s more, Rome is “deserted.” (His Excellency doesn’t say it’s vacant, but he comes as close as he can.) Moscow is now the “obstacle” that holds the Antichrist at bay until the Second Coming—holding the line, as it were, until Our Lord returns. Traditionally, this obstacle is understood to be the Church, against whom the gates of Hell shall not prevail.

Again, this isn’t a political claim. This has nothing to do with holy Russia fighting the godless West. Archbishop Viganò is hinting strongly at the view that the Patriarch Kirill of Moscow is now effectively the primus inter pares. With the help of Vladimir Putin, he will lead the universal Church until the Roman clergy are “purified and renewed.”

As you know, the Orthodox refer to Constantinople as the “Second Rome” because they believe the pope lost much of his spiritual authority following the Great Schism of 1054. Moscow came to be known as the “Third Rome” because, after the Byzantine Empire collapsed in 1453, Russia was the greatest Christian power in the world and some Orthodox came to believe Moscow was the new seat of authority in Christianity.

Well, then, there are only two ways to read Archbishop Viganò’s extraordinary statement. The first is that he’s converting to Russian Orthodoxy. The second, and more likely, is this: rather than taking his political cues from religion, he takes his religious cues from politics. It’s the same fundamental error the Orthodox fell into. If His Excellency and his supporters follow this line of thinking, they, too, will soon find themselves outside of the Catholic Church.

Ironically, Archbishop Viganò is quite a bit like William Montgomery Brown—the “Bad Bishop”. An Anglican prelate who became a fanatical communist, Brown was excommunicated by the Episcopal Church (no mean feat!) in 1924.

“Lenin is the great leader of the people of the world,” he wrote in Christianity and Communism. “The Russian Bolsheviki occupy the highest peak in man’s history; and while they stand, the world will be safe for industrial democracy.” Immediately after his excommunication, Brown was offered orders in the Russian Orthodox Church, which was by then under the Soviets’ power.

Really, I don’t mean to insult Archbishop Viganò. All I mean is this: like Brown, Viganò is being swept away by trends in modern politics. His (legitimate!) anger at the West is blinding him to the evils of the Russian government. And so he’s letting the clamor of current events drown out the “still, small voice” that spoke to Elijah. It’s the voice of reason—the voice of God.

I won’t end this article by calling for Archbishop Viganò’s resignation or urging traditionalists to condemn him. Even if I believed in mobs, who am I to lead one? But faithful Catholics deserve a fair warning that His Excellency’s position is untenable, and Catholic publications should think twice before carrying his future “declarations.”

His Excellency is clearly flirting with schism. If he keeps down this road, he and his followers will separate themselves, not only with the Bishop of Rome, but from the universal Church.