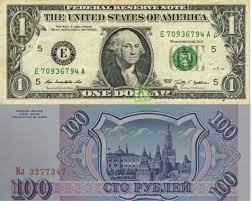 UPDATE 7.00 pm  In related news, Russian space agency Roscosmos announced that it will only accept payment in rubles… This may turn into a humiliating event for the US as an American cosmonaut is in the International Space Station and has to return to Earth soon –  and the only way would be with a Russian spacecraft! Let’s see if Elon Musk can help – a little dubious if I had to guess…

Also, the price of natural gas in Europe jumped over 10% after Russia announced it will only accept rubles… Good-bye sanctions!! Let’s all pray to avoid the war that is looming in the horizon…

EDITOR’S NOTE (Nick Stamatakis):  Unbelievable!! One simple move by Vladimir Putin shot the Ruble to about 100 versus the dollar, while it had fallen as low as 150… Before the sanctions, the ruble was trading at about 80 vs USD…

What did Putin do? He demanded that all “hostile” countries (for example all European countries including Germany and Greece!) pay their oil and gas purchases from Russia in rubles!!

Congratulations to all the “geniuses” who advised the Biden administration and hold Ph.D. degrees in Economics from Harvard!! They just got a priceless lesson in Economics! (Reminder: Alexandria Ocasio-Cortes is an Economics graduate from highly rated Boston University!)

Good luck with the sanctions!! In a few days, Russia and China will be imposing sanctions on us – God help all of us with the stupidity of our leadership...

PS. I checked right before I posted this article and within the last few minutes, the ruble rose higher vs the dollar, to 97…

(Reuters) -The Russian rouble briefly leapt to a three-week high past 95 against the dollar on Wednesday in Moscow, before settling close to 100, after President Vladimir Putin said Russia would start selling its gas to “unfriendly countries” in roubles.

The potential ramifications of that move, which Putin ordered his government to sort out in one week, could boost the Russian currency, with a host of European countries still dependent on Moscow for much of their energy supplies.

The rouble had stabilised near 105 to the dollar in recent sessions after falling to a record low of 120 in Moscow this month and even further on the interbank market to 150.

Russia has taken a hit from unprecedented Western sanctions over events in Ukraine, what it terms a “special operation”, that started on Feb. 24.

Before that, the rouble traded at about 80 to the dollar.

Trading in OFZ bonds resumed this week, and the Bank of Russia announced some stock market trading would resume on March 24 after a near month-long hiatus, with 33 securities included into the benchmark IMOEX index set to be traded on the Moscow Exchange for a limited period of time and with short selling banned.

Russia appeared to have averted default on foreign debt by making a coupon payment on a sovereign Eurobond, maturing in 2029, in U.S. dollars. A bondholder said the payment had been received.

Demand for rouble liquidity has declined as the central bank sold 0.8 trillion roubles ($7.7 billion) at a one-day “fine-tuning” repo auction on Wednesday, lower than in previous days.

“Demand at overnight repo auctions is falling fast,” Veles Capital brokerage said in a note, explaining that even though banks’ liquidity levels have fallen to their lowest since June last year, lenders are repaying previous repo debts to the central bank.

Trading on the OFZ bond market continued for a third day after it was shut in late February.

The central bank said last week it would begin buying OFZ bonds to limit volatility, after it held its key interest rate at 20% in the wake of an emergency rate hike in late February.

The central bank has so far not disclosed the size of its interventions on the OFZ market that helped stabilise prices and provided extra liquidity to the financial system.