In one more misstep – truly expected by a double-faced Phanariot such as Elpidophoros – the Archbishop revealed the Platytera icon of the Theotokos that will adorn the church apse, dubbed “The Virgin of New York City”, and “Our Lady of New York City”…

The icon (in our main image), is showing the Mother of God with the Christ Child protecting the city, including familiar landmarks such as the Statue of Liberty, the Brooklyn Bridge, and Tower One at the World Trade Center, as well as the St. Nicholas Church…

In his announcement (below) the Archbishop starts in the right manner by describing “a photograph of the completed icon (yet to be installed in the apse of the Church), known as the “Platytera Ton Ouranon” – “She Who is Wider than the Heavens.”  But as he progresses he presents a number of themes that deviate from Orthodox tradition.

First, he associates Our Panagia with one specific city, New York City… I am not going to argue here whether one city, NYC, London, Paris, Athens or Moscow is holier or more sinful than any other – the cities are sinful and all of us are sinners. But by defining the “Platytera” as a concept alone this association with any city should have been avoided: “Platytera”, the “widest of heavens” is best translated as “the more spacious than heavens”.  How such a wonderful Godly image of the Platytera be restricted to just one city? It reduces the “Platytera” to a specific space and time, something that she is definitely NOT.  SHE IS TIMELESS AND ABOVE AND BEYOND ANY PLACE AND ANY CITY – SHE IS THE “PLATYTERA”… Second, in the last paragraph of his message, “Cardinal” Elpidophoros proceeds to add another name to Our Panagia, Our Platytera.  He calls her, “Our Lady of New York City”. This is certainly not a “slip of the tongue” coming from someone who is dead-set on heresy: uniting the Catholic Church with Orthodoxy.  He has a long past on this issue that goes back decades: from kissing the Pope’s hand to co-celebrations and any other “ecumenist” or slavish to the Pope action you may imagine…

I entered “our lady of NYC” in a google search and here are the results on the map – just in a 10-mile radius around NYC:

The last two are just a few blocks from St. Nicholas of Ground Zero… And there are about 20 more “Our Lady” Catholic churches in NYC…

This is definitely NOT a Platytera…  Certainly, not a “Platytera” belonging to the apse of any Church… There are icons of Panagia with a thousand “specific” images and names – just like the Catholic “Our Ladies”… But they are not “Platyteras” belonging to the apse: they are icons of Panagia that can be put on the temple or elsewhere – not in the apse of the Church… The apse in Orthodox church iconography is reserved for ONE Platytera, ONLY ONE – the same everywhere… Like the dome, is reserved for “Pantocrator” AND ONLY THE PANTOCRATOR… “Cardinal” Elpidophoros with his political and duplicitous Phanariot wording, has reduced the most beautiful religious concept and image, our All-Loving and All-encompassing “Platytera”, who is “wide” enough and “spacious” enough and divine enough to encompass the whole universe, to a local “saint”…

This is the second misstep related to the hagiography of St.Nicholas at Ground Zero – and we are hoping it will remain at a “rhetorical” level.  The first one was a real desecration as you probably remember, as it raised Pat. Bartholomew to the same level as Saint Nicholas (link here to our post…) 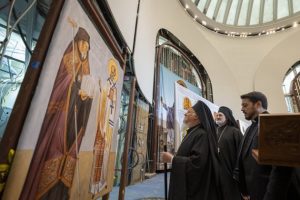 PS. Did I mention that the full name “Greek Orthodox Church and National Shrine” is nowhere to be found in the Archbishop’s message?  If the full name is not there, what are the chances of both flags, an American and a Greek flag, being outside the Church?

The Virgin of New York City

In the Saint. Nicholas National Shrine

My Beloved Sisters and Brothers in Christ,

In this Newsletter, you will see for the first time a photograph of the completed icon (yet to be installed in the apse of the Church), known as the “Platytera Ton Ouranon” – “She Who is Wider than the Heavens.” The icon is thoroughly described in the article by Bishop Joachim of Amissos, but I want to share with you some thoughts about what this icon means for the Shrine and for New York City.

Because of the momentous and tragic events of September 11th, the Saint Nicholas National Shrine has a special responsibility to the community of New York City. As much a place of remembrance and honor, it is also a place of affirmation. Affirmation that we have celestial protectors and defenders, among whom is the Virgin Theotokos herself.

In the icon, the Virgin with outstretched arms is embracing our City, just as She does the Queen of Cities, Constantinople. We see in the icon familiar landmarks like the Statue of Liberty, the Brooklyn Bridge, and Tower One at the World Trade Center. And we also see the Saint Nicholas National Shrine in the foreground, manifesting that the rebirth of our Church at Ground Zero is a rebirth of our faith in the wake of love and forgiveness.

Forgiveness is a hard thing to associate with 9/11, because of the brutality and barbarity of the attack. But the Virgin’s embrace is the same one which held her Son when His body was taken down from the Cross. It is an embrace of love and hope, and we have seen this hope realized in the rebirth of the World Trade Center. And we are building a beacon of love and forgiveness to be a house of healing at Ground Zero, which needs this presence.

Our Panagia – our Lady of New York City – is a visible sign of this love and forgiveness, for she forgave the crucifiers of her Son, and she will embrace all who come into our National Shrine, with the same message of love and hope that was brought to her by the Archangel on the Day of Her Annunciation.

With Love and Blessings in our Lord Jesus Christ,