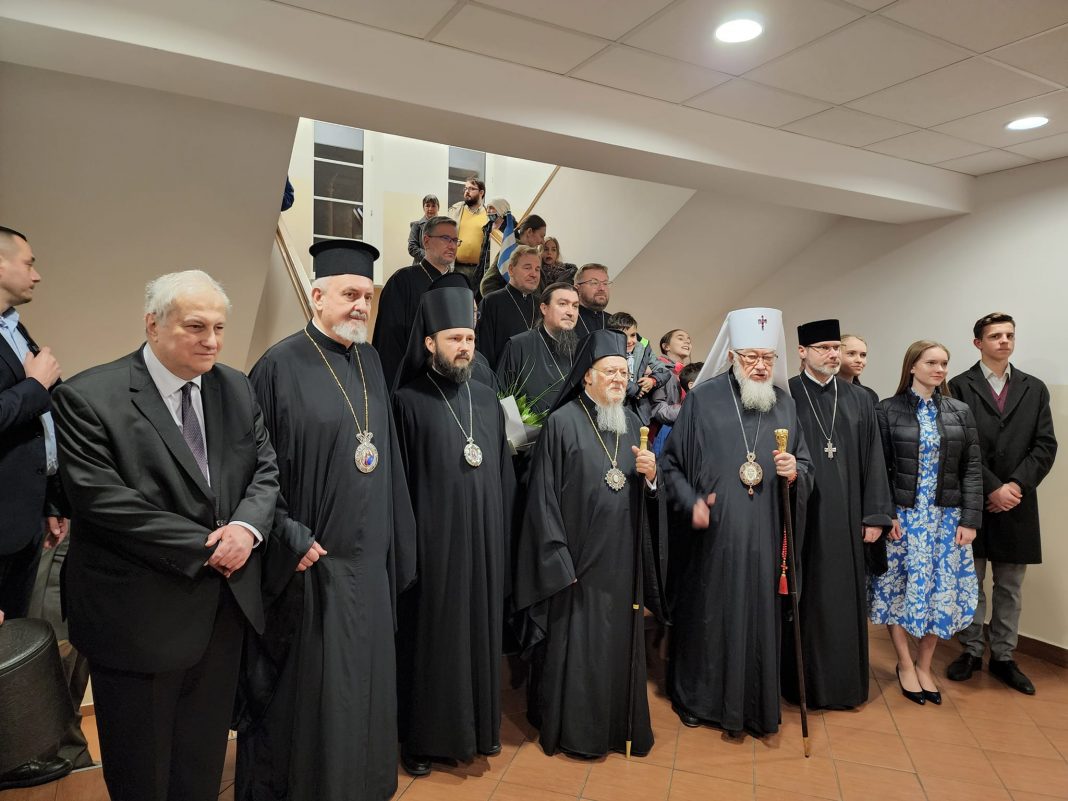 EDITOR’S NOTE (Nick Stamatakis): Our friend George Michalopulos of Monomakhos.com, taking a cue from Pat. Bartholomew’s subdued visit to Poland is wondering: “Where’s Epiphany? Where’s the Pentarchy?” There are many signs that it started dawning on the “leaders” of the Constantinople Patriarchate that all their big plans are coming to a sorry finish… 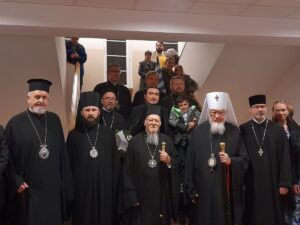 Last week, Metropolitan Sawa of Warsaw and All-Poland, invited Patriarch Bartholomew of Constantinople to come to Warsaw, wherein he stressed to Bartholomew the urgent need for a synaxis of the Orthodox Churches.

From the looks of the photos, it appears to be far from a triumph for the Phanariote delegation.

Now, this raises an interesting question.  Specifically, why wasn’t Sergei Dumenko, Bartholomew’s hand-picked choice to be the “Metropolitan of Keev and All-Ukraine” there?  He should have been front-and-center; after all, it’s his country that is under attack.  And according to the Phanar’s grant of “autocephaly” to Ukraine, he is the primate of that country’s Church.

In fact, where has Dumenko been throughout this whole imbroglio?  Unlike Zelensky, who’s been seen every day dining with soldiers, rallying the people, and addressing foreign parliaments, the “Metropolitan of Keev” is strangely absent from the scene.

In other words, the optics, as far as the so-called Orthodox Church of Ukraine is concerned, are bad.  If I were advising them, I’d have Dumenko at some refugee camp in Poland handing out baskets of food and toiletries to the hordes of Ukrainian women and children.  Maybe even putting a child or two on his lap.  How about this:  serving an open-air panikhida for his nation?  It didn’t work for Resident Biden but hey, he gave it the old college try.

Instead, judging by the photos of this event, the entire diplomatic mission of the Phanar was nothing more than a perfunctory affair.

Leaving all that aside, because neither Dumenko nor Bartholomew were out front-and-center, we can safely assume that (1) the refugees are not part of Dumenko’s sect, (2) they don’t particularly like Dumenko (or are oblivious to him), and (3) Bartholomew recognizes this.  If so, we can assume that Bartholomew’s plan to create an “autocephalous” Church for Ukraine has also come to naught.

It’s also possible that Bartholomew recognized that his meddling in Ukraine only exacerbated the tensions in the suffering country.  He’s an intelligent man and a hallmark of such men is to know when to lay low.  Especially when their plans come to naught.

It’s also possible that he sees that the great Globalist Crusade against Russia is not going the way the globalist cheerleaders thought it would.  Mariupol has fallen and thanks to atrocities being perpetrated against Russian POWs coming to light, public opinion is starting to turn against the Ukronazis.  The fact that Zelensky (who is Jewish), has not seen fit to denounce them continues to raise doubts about his bona fides among many of his supporters in the West.  I guess these are the “good Nazis.”  (Somebody please help me out with this.)

In case you didn’t know, the Ukrainian government has put a stop to foreign recruitment; this means that they are running out of ammunition.  The stars are definitely not aligning for the Ukrainians in other ways as well:  Zelensky recently fired two of his top generals, calling them traitors.  Both of these men were in the intelligence services.  (As for the US Army, recruitment has fallen to catastrophic levels.  We can thank Emma and her two moms for that.)

As for the ruble, it has rebounded stunningly.  Last month, the ruble was acknowledged to be the world’s “most durable currency.”  As for the sanctions, rather than angering the Russian nation, driving them into the streets and hopefully toppling Putin, it has catapulted his approval ratings to stratospheric levels, allowing him to consolidate power.

As for the atrocity-porn put out by Kiev, most people believe them to be hoaxes right off the bat.  We can thank four yours of Russia Collusion and two years of Faucism for that.

Does this mean that Dumenko will be kicked to the curb?  Possibly.  More likely, he’ll just melt into the woodwork.

As stated above, Sawa recognized that Orthodoxy has severe inter-ecclesial problems.  In accepting his invitation, Bartholomew is now forced to recognize this as well.  Problems that can’t be rectified by the Robber Council of Crete which he convened in 2016.  Nor by his (now blessedly defunct) proposal to decide these issues by calling for a synaxis of the “ancient patriarchates + Cyprus.”