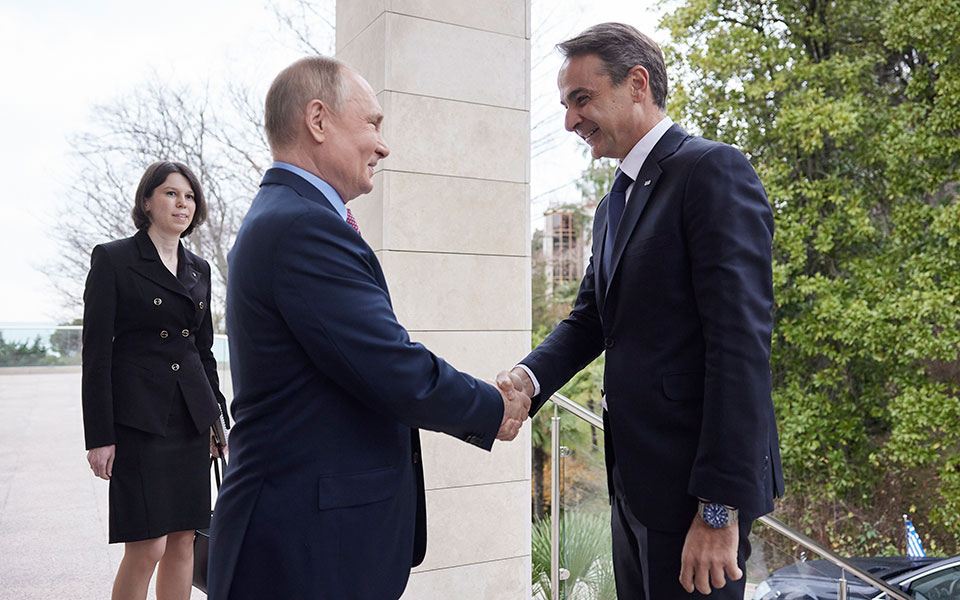 EDITOR’S NOTE (Nick Stamatakis): This article was written by an experienced journalist (Diet Simon is a freelance journalist having spent 50 years contributing to Germany’s Deutsche Welle) published in the main Greek-Australian newspaper “Neos Kosmos). It’s a special “gift” to the US Ambassador in Greece, who disgraced his diplomatic status in Kiyv in 2014 and – along with neocon Victoria Nuland- acted like intelligence agents directing a coup.  Pyatt believes that he is so powerful as to go against one thousand years of history between Greece and Russia and reverse or reduce Putin’s popularity ratings in Greece that for years have not changed: about 70%, higher than any foreign or domestic political figure.

Maybe Mr. Pyatt should start changing his tune, stop acting like a “praetor” (Roman eparchy director), and treat Greece, not as a “colony” and Greeks not like his “subjects”, but like a country and a people who are by definition friendly and natural allies to America – and show the respect they deserve? We do not expect much from the new Ambassador George Tsunis due to his political inexperience bordering cluelessness-  we do not even know when he will arrive in Greece. But we do know that Pyatt will play his “deep state” games when he comes back to the US… Does he really think he is promoting “American” interests? Look at what he and the other “deep-staters” have managed with their wrongheadedness: they have turned 3/4 of humanity into an alliance against America!! Turkey, Israel, even Mexico did not follow the US in sanctions against Russia!! But puppet Mitsotakis did!!

For this to happen, the political leadership of Greece has to start protecting their homeland’s interests first – before any ally’s – and not blindly following any foreigner’s policies, be it American or German… To those foreigners they should say in one voice: We, the Greeks, occupy this most valuable and beautiful piece of the planet for thousands of years and your mediocrity will not be able to put us in danger by applying on this land your self-serving sinister plans…

PS: Regarding the Mariupol Greeks, Mr. Simon fails to recognize (in the last paragraph below) that they are Russian-speaking and were protected by the Russian and local fighters against the Azov Batallion Nazis of the Ukrainian Army… This is why neither Pat.Bartholomew or AB Elpidophorow issued not one word about them… Unfortunately, western writers are very slow in recognizing these truths….

Why Putin has so many fans in Greece As far as Putin’s war against Ukraine is concerned, Greece is deeply split. The Russian president has many fans in the country. Part of the reason are historical roots.

There’s probably no other EU country where as many people as in Greece revere Vladimir Putin. The war against Ukraine has not damaged the friendship with Russia that many Greeks feel. The affection has religious, historical and ideological roots. “Murderer Putin” was written on placards held up by demonstrators recently in Thessaloniki in northern Greece. But where Putin and his war are concerned Greeks are deeply split.

Opinion polls have found 65% of men and women thinking that Greece should stay neutral about the conflict. 39 per cent said Greece should not join the EU’s sanctions against Russia. 67% oppose Greece supporting Ukraine by supplying weapons. More than a third even expressed “understanding” for the Russian invasion.

The government of the conservative prime minister, Kyriakos Mitsotakis, supports Ukraine with weapons and humanitarian aid. Mitsotakis declared: “There can be no neutrality. Either one favours peace and international law or one is against.” But when on Thursday President Volodymyr Zelensky addresses the Greek parliament by live video link from Kiev a number of seats will probably remain empty. The Greek communist party KKE has already announced it won’t take part in the session. All but one member of the left wing Mera25 party of the former finance minister Yanis Varoufakis will also stay away. It will be interesting to see whether deputies of the left alliance Syriza of former premier Alexis Tsipras will also boycott.

Like the majority of the leading Syriza politicians Tsipras hails from the Stalinist KKE. A few weeks after the Russian annexation of the Crimean the then opposition leader Tsipras went to Moscow in May 2014 where he flagellated the “neo-fascism” in Kiev. A year later as premier Tsipras continued his snuggle-up course with Vladimir Putin. Just hours after being sworn in as premier he received the Russian ambassador Andrey Maslov as the first foreign diplomat. One of the first congratulatory telegrams came from Putin.

A little later Panos Kammenos, Tsipras’ coalition partner of the right wing-nationalist Independent Greeks, the new defense minister and also a Putin fan, brought into play the option that Greece should ask Moscow for loans to cut the umbilical cord to the financial support from the EU.

When the Greek financial crisis peaked in summer 2015 and Tsipras flirted with withdrawal from the Euro zone. He is said to have asked Putin to help him print new drachma notes. The then French president François Hollande reports in a book Putin had told him this in a telephone conversation. Tsipras denies this episode.

Less than three months after being elected the new Greek Prime Minister Tsipras went to Moscow. Putin returned the visit the following year. As part of his official state visit agenda the Kremlin chief made a side trip to the sacred Mount Athos, the monks’ republic in northern Greece. The reason for the pilgrimage was a celebration of the 1,000th year of Russian monks joining the others on the mount.

In the perception of many Greeks the common religion is a strong bond between the two countries. The Orthodox Christianisation of Russia started from Byzantium in the 10th century. In both Greece and Russia the Orthodox faith remains a major driver of nationalism. That explains the affinity to Russia of large sections of the Greek right and clergy.

But the attraction also has historical roots. Early in the 19th century the Russian czarist empire supported the Greeks in their war of liberation from Ottoman occupation. In 1827, in the sixth year of the Greek uprising, Russian warships, jointly with French and British units, demolished the Turkish fleet in the Battle of Navarino (Navarino Bay (modern Pylos), is on the west coast of the Peloponnese).

That was the turning point that secured independence for the Greeks. For that reason Russia already then had many fans among them. From 1827 to 1865 there was even an influential “Russia Party” in Greece, a collection point for conservative-absolutist forces.

In 2021 both countries celebrated the “​Year of History of Greece and Russia”, commemorating the 200th year of the Greek revolution. Hence many Greeks still regard Russia as a natural ally of their country, including because of the historical Russian rivalry with Turkey for control of the maritime straits of the Bosphorus and the Dardanelles as well as the spheres of influence in central Asia.

Among leftist politicians like the former communist Tsipras an ideological, antifascist elective affinity resonates that links back as far as the era of the Greek civil war from 1946–49. Then the mainly KKE-comprised left popular front fought with support from Albania, Yugoslavia and the Soviet Union for Greece to join the Eastern Bloc.

But now the war on Ukraine puts the love for Russia of many Greeks to a severe test, because in the Ukraine there are about 150,000 ethnic Greeks. Most live in Mariupol and Odessa. Many have already been killed in the Russian attacks.

Yet a poll found only 26 percent of Greeks willing to actively help Ukraine. 68 percent are dissatisfied with the government’s stance regarding the conflict. That is likely to include many followers of the governing party, Nea Dimokratia (ND). Since 2011 the ND has been in a partnership with Putin’s party United Russia.

* Diet Simon is a freelance journalist having spent 50 years contributing to Germany’s Deutsche Welle. He is a German-born Australian citizen now residing back in Germany.