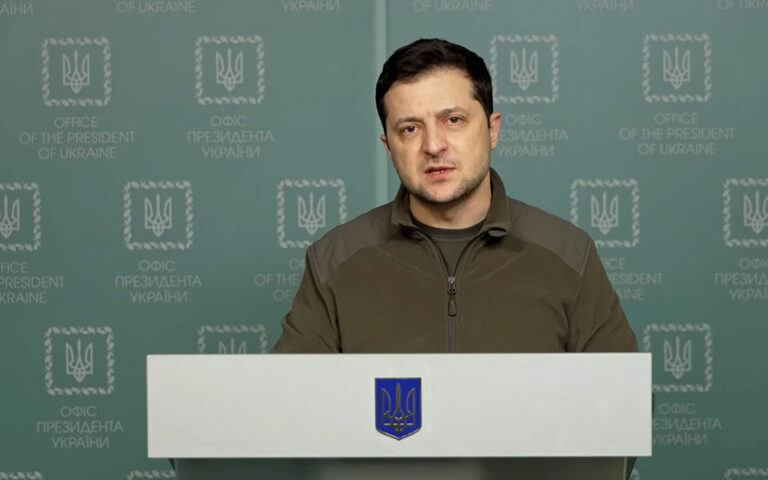 EDITOR’S NOTE (Nick Stamatakis): Helleniscope has predicted in a relevant post last week that allowing Zelensky to speak to the Greek Parliament would backfire and the whole appearance would turn into a real disaster… And here we are today, after the horrible event analyzing the disaster…  Zelensky was derided by the overwhelming majority of the public for using the Greek Revolution slogan “Freedom or Death”… Then a bigger disaster happened when two Nazi soldiers, declaring to be of Greek descent, who apparently said that they are part of the Azov Batallion, spoke against the Russians… Well, what do you expect? Pyatt, Nuland and the “deep state” operatives never learn their lessons: They go to Mt.Athos, appearing like flies in milk, and they turn off both the monks and the Greek public.  Then, while everyone knows that the Greeks in Mariupol and Eastern Ukraine are 95% Russo-phone and identify with the Russians in many respects, they try to feed the Greek public pure propaganda of supposedly “Ukrainian Greek” fighters… Below is a report from Athens by Alex Christoforou.

“Including a message from an Azov Battalion member was wrong and inappropriate”, said government spokesman Giannis Oikonomou in the aftermath of Ukrainian President Volodymyr Zelensky speaking to the Greek Parliament.

Controversy arose though when Zelensky included a video message from a member of the neo-Nazi Azov Battalion, who claimed to be Greek.

The appearance of the neo-Nazi fighter prompted SYRIZA MP’s Nikos Filis, Thodoris Dritsas and Yiannis Giolas to walk out of the session.

“The speech by members of the neo-Nazi Azov Battalion in the Greek Parliament is a challenge. They spoke of a history day, but it’s a historic shame. Solidarity with the Ukrainian people is a given. But the Nazi cannot have a say in parliament,” said SYRIZA leader Alexis Tsipras.

Following this, government spokesman Giannis Oikonomou said “Including a message from an Azov Battalion member was wrong and inappropriate.”

For his part, the Azov Battalion fighter, who claimed to be Greek but could not speak Greek, said in Ukrainian: “I am addressing you as a Greek.”

“My name is Michael, my grandfather fought in the war against the Nazis, I was born in Mariupol and I participate in the defense of the city,” he added.

The Azov Battalion is based in Mariupol and has long led a campaign of terror against civilians, including the 120,000 Greeks that live in the port city and its surrounding villages, including Sartana.

With Russian forces besieging Mariupol, in which 120,000+ ethnic Greeks live, SKAI news spoke with a Mr Kiouranas who lives in the city and exposed that Ukrainian “fascists” are killing people for trying to leave the city.

When asked by SKAI news if he planned to leave the city, Kiouranas responded “how can I leave? When you try to leave you run the risk of running into a patrol of the Ukrainian fascists, the Azov Battalion.”

“They would kill me and are responsible for everything,” he added.

Who are the Azov Battalion?

Azov Special Operations Detachment (Ukrainian: Окремий загін спеціального призначення «Азов»), or Azov Battalion, is a right-wing extremist and neo-Nazi unit of the National Guard of Ukraine, based in Mariupol, in the Azov Sea coastal region.

In 2014, the regiment gained notoriety after allegations emerged of torture and war crimes, as well as neo-Nazi sympathies and usage of associated symbols by the regiment itself, as seen in their logo featuring the Wolfsangel, one of the original symbols used by the 2nd SS Panzer Division Das Reich.

Representatives of the Azov Battalion say that the symbol is an abbreviation for the slogan Ідея Нації (Ukrainian for “National Idea”) and deny connection with Nazism.

In 2018, a provision in an appropriations bill passed by the U.S. Congress blocked military aid to Azov on the grounds of its white supremacist ideology; in 2015, a similar ban on aid to the group was overturned by the Congress.

Members of the regiment come from 22 countries and are of various backgrounds.

The unit’s first commander was far-right nationalist Andriy Biletsky, who led the neo-Nazi Social-National Assembly and Patriot of Ukraine.

In its early days, Azov was a special police company of the Ministry of Internal Affairs, led by Volodymyr Shpara, the leader of the Vasylkiv, Kyiv, branch of Patriot of Ukraine and Right Sector.

In 2018, the U.S. House of Representatives also passed a provision blocking any training of Azov members by American forces, citing its neo-Nazi connections.

The House had previously passed amendments banning support of Azov between 2014 and 2017, but due to pressure from The Pentagon, the amendments were quietly lifted.

This was protested by the Simon Wiesenthal Center which stated that lifting the ban highlighted the danger of Holocaust distortion in Ukraine.

Zelensky to Greek Parliament: “Our slogan is Freedom or Death”

Ukrainian President Volodymyr Zelensky spoke in the Greek Parliament and sent a message of “freedom or death” and the Greeks to create a new “Friendly Society”, this time in Greece instead of Odessa, which will help save Mariupol.

The special session, which the Speaker of Parliament, Konstantinos Tassoulas, described as historic, was attended by the entire parliamentary group of New Democracy and KINAL, while several deputies were absent from SYRIZA.

At the same time, the deputies of the Communist Party of Greece and the Hellenic Solution were absent, as well as six of the seven deputies of MERA25.

Zelensky began his speech with a reference to the Greek-founded city of Mariupol.

“For more than a month, every morning I wake up and think of Mariupol receiving the information about what is happening in this martyr city. This has not happened in another city for half a century. Russian soldiers are destroying everything in Mariupol, it’s the work of Russian pilots who could see what they were doing,” he said.

Continuing, Zelensky made many references to the presence of Hellenism in Ukraine, describing the coexistence with the Ukrainians as millennial.

“Apart from Mariupol, Odessa, another large Greek center, is also threatened. Why is Odessa calm? Because we managed to drive the Russian barbarians to a relatively safe distance. These troops were killed in places where the Greek community, the Jewish community and other communities coexisted peacefully with the Ukrainians.”

The Ukrainian president also made a special reference to the Friendly Society.

“The Friendly Society, was established here and it is something that is of great importance. A new Friendly Society could be created in Greece and save Ukraine. Mariupol, Odessa need immediate help. The Russians are hitting from the sea and land and air,” said the Ukrainian president and then gave the floor to two Ukrainians and two Greeks who are fighting against the Russians in Mariupol.

Later in the video appeared two ethnic Greek who are fighting in Ukraine.

“A very large part of the city’s population is Greek. The city has been 90% destroyed by the Russian Nazis. Thousands die. Please help us,” said the first of them. “Hundreds of people are dying under the damaged buildings. We do not have the ability to save them. You can provide humanitarian aid,” he said.

He then referred to the beginnings of the Greek presence in the Black Sea, pointing out that “with Greece, the development of Christianity has developed in several countries. Ukraine was Christianised by the Greeks .”

“In Ukrainian history we will lose a large part of our identity, losing the dimension brought by Greek culture. Freedom or death, your revolutionaries used to say, we say the same now,” the Ukrainian president added.

According to him, in addition to Mariupol, Odessa is also threatened by another large centre of Hellenism “and the Foreign Minister heard the horrible sound of machine guns”, he said, referring to the recent visit of Nikos Dendias.

The highlights of Volodymyr Zelensky’s speech: