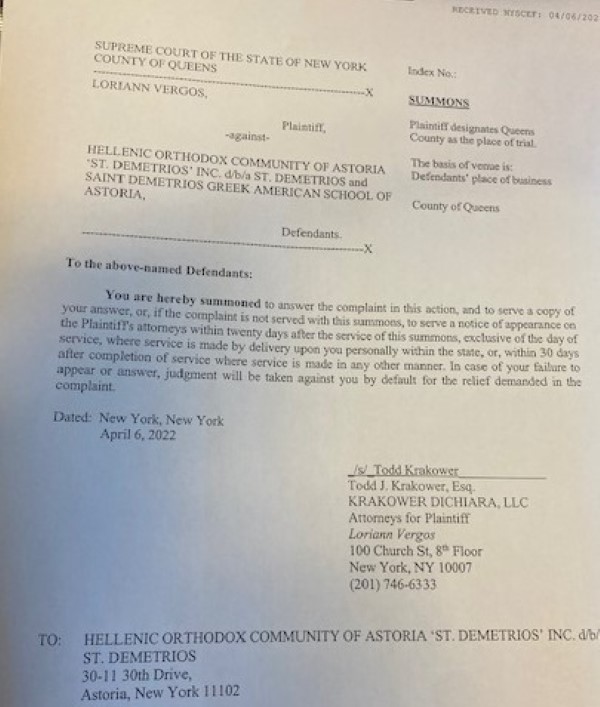 Loriann Vergos, who worked at the Saint Demetrios School as admissions director for a little over two years (2019-21, was hired by A.Koularmanis who had also filed a lawsuit against the parish – it ended in a settlement that cost St.Demetrios tens of thousands of dollars!!) accuses the parish of several labor violations of monetary nature.  Both Koularmanis and Vergos serve in the parish council at the Transfiguration Church of Corona, Queens, NY.  Is this a new policy at GOARCH to continue to have their employees or volunteer PC members file lawsuits against other GOARCH organizations? 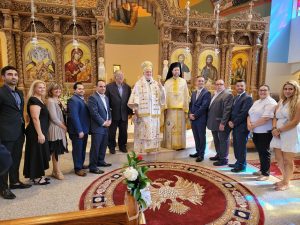 PHOTO: The first visit of the Corona parish to the Archbishop. Ms. Vergos is second from the left and A.Koularmanis, installed parish council president, is near the center (fifth from the right)

Less than two years after the infamous lawsuit by the former principal of St.Demetrios School A. Koularmanis against the parish – which was settled out of court and cost the parish tens of thousands $$ (disclosure: this lawsuit continues as a “defamation” lawsuit against the undersigned) – a new lawsuit was filed recently against the parish, this time by the former admissions director, Ms. Loriann Vergos.  Ms. Vergos was hired by Koularmanis and served as admissions director for the school from January 2019 to March 2021.

The lawsuit (here is the full document (VERGOS VS. ST.DEMETRIOS COMPLAINT) was filed at the Queens County Supreme Court and lists a number of monetary violations of labor law against the parish: 7-10 hours per week overtime, weekend work etc. It is noteworthy that Ms. Vergos even accuses the parish of not paying her during her work in July and August!  Well, if this is the case, one has to wonder what kind of contract Ms. Vergos signed… Is there any admissions director at any school who is supposed to take off during July and August?

Then there is the relationship between A. Koularmanis and Ms.Vergos.  First, Koularmanis was the principal of the school in January 2019 and the one who hired her.  Did he make her sign a contract and what terms were included? Second, a couple of months after AB Elpidophoros was enthroned (June 22, 2019), the new Archbishop hired Koularmanis as the new Education Director (he started there in Jan. 2020).  But in the fall of 2019, Elpidophoros installed Koularmanis as the parish council president at the Transfiguration Church in Corona, Queens, and, strangely allowed Koularmanis to hand-pick (no elections) the parish council members!! Naturally, Koularmanis picked all his family and friends/associates, some of whom were from the scandal-plagued St.Demetrios School where he employed a number of family and friends!! 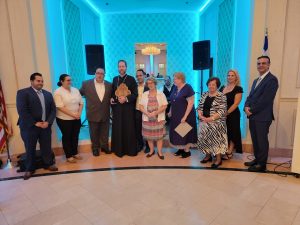 PHOTO: Another photo of the Corona parish council. Koularmanis and Vergos appear next to each other at the right.

The connection between Koularmanis and Vergos continues at Corona and underlines the leadership and management problems at GOARCH.  Many, not only Helleniscope, had criticized AB Elpidophoros’s inaction at keeping Koularmanis employed after he filed a lawsuit against, arguably, the most important parish of GOARCH. Even TNH, who at that time was well reimbursed by GOARCH in the form of advertising went publicly against this “conflict of interest” situation.  Now we have the second time that another person (interestingly having a close relationship with Koularmanis) does the same thing.  When will it stop?  We understand that where the Archbishop comes from (Turkey) the term “conflict of interest” does not mean much.  But this is New York and this is America.  Will he be the Archbishop of America or the “Pasha of New York”? 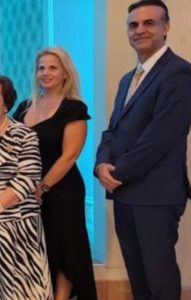 Finally, we cannot fail to mention the close connection between Bishop of Medeias Apostolos (Koufalakis), who happens today to visit St. Ekaterini of Astoria, and A.Koularmanis.  It seems to me that Bishop Apostolos, who has a very tainted past when he served as the presiding priest in Astoria, is re-connecting with old “associates” like Koularmanis and he is trying to make a “comeback” in the parish and use it as a vault for his sickening ambitions (to become Archbishop).  To Bishop Apostolos, we can say one thing: put your business in order first and show to all that you have sought advice and corrected some of your faults.  Sit down with your supervisor, AB Elpidophoros, and review your management policies.

Is the Archbishop going to allow Ms.Vergos to sit in the Corona parish council and act as if nothing happened as she sues another neighboring parish? Is he going to allow all kinds of conflicts of interest to keep taking place under his nose? Or he is going to replace his lack of management skills with photo opportunities and meaningless smiles?

Enough is enough with ineptness, arrogance, vanity, and greed in GOARCH!