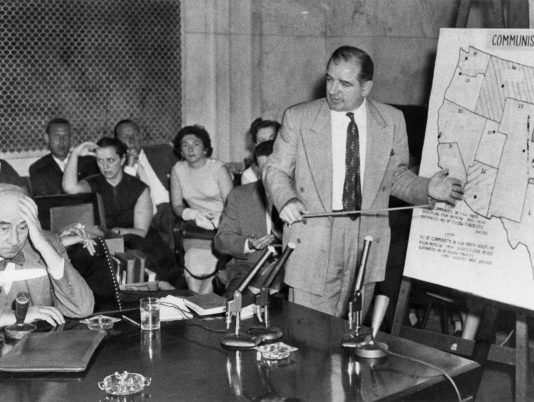 Zealous anti-Russia voices are actually demanding that anyone opposing their views be silenced, and even criminally prosecuted.

A troubling pattern has developed over the decades in which foreign policy hawks smear their opponents and thereby seek to foreclose discussion of questionable U.S. policy initiatives.

The late Sen. Joseph McCarthy and his followers used that tactic to perfection during the Cold War. They branded anyone who suggested that Washington should consider adopting a less confrontational policy toward the Soviet Union or the People’s Republic of China as communist sympathizers or even outright traitors. Journalists and educators found themselves on blacklists, and dissenting officials found themselves in the ranks of the unemployed.

It was not until the late 1960s, when street protests erupted over the Vietnam War, that the atmosphere of intimidation began to weaken. When Richard Nixon’s administration pursued détente with Moscow and began to establish a normal relationship with China in the early 1970s, Americans could once again challenge U.S. policies without automatically being labeled as traitors.

The stifling of debate throughout the 1950s and much of the 1960s, though, facilitated the adoption of several unwise policies, not the least of which was the disastrous Vietnam military intervention.

In the aftermath of 9-11, McCarthy-style attacks made a strong reappearance. Efforts to oppose the repressive Patriot Act, which enabled intelligence and law enforcement agencies to violate civil liberties with impunity, drew immediate accusations of being “soft on terrorism.”  So did criticism of the thoroughly unwise Authorization for the Use of Military Force (AUMF), which gave the president virtually a blank check to wage military interventions around the world in the name of a “war on terror.”  Hawks successfully broadened that tactic to inhibit badly needed discussion of George W. Bush’s campaign to initiate a regime-change war against Iraqi leader Saddam Hussein. David Frum’s infamous article in National Review, “Unpatriotic Conservatives,” was the most flagrant example of the new McCarthyism, but it was far from being the only one.

The same pattern has emerged again with respect to U.S. policy toward Russia. Indeed, the smears were plentiful from a de facto alliance of neoconservatives and liberal hawks long before the Kremlin launched its current, brutal invasion of Ukraine. Experts who made the case that Washington’s meddling to help demonstrators unseat Ukraine’s elected, pro-Russia president in 2014 led to Russia’s subsequent annexation of Crimea found themselves targets of that alliance’s vitriol.

Princeton University Professor Stephen F. Cohen, a longtime distinguished scholar of the Soviet Union and its successor states, was a prominent early target. Critics impugned Cohen’s motives and sullied his reputation. Epithets such as “Putin’s American apologist” and “Putin’s Pal” were among the routine labels they applied.

Andreas Umland, one of Ukraine’s most ardent advocates and a notorious Russophobe, directed his fire at me, even though I had never said a single favorable word about Vladimir Putin. “Carpenter’s talking points would be instantly recognizable to Russian TV viewers, who have encountered similar disinformation on a virtually daily basis for the past seven years. One can only guess at Carpenter’s motives.” The echoes of McCarthyism were unmistakable—and loud.

Yet an array of reputable scholars had warned since the 1990s that NATO’s expansion toward Russia would poison East-West relations and ultimately lead to a new cold war (if we were lucky), or a hot war (if we weren’t). Those scholars included George Kennan, the intellectual architect of Washington’s Cold War containment policy toward the Soviet Union, and John Mearsheimer, the dean of realist international relations scholars. The mob of character assassins rarely bothered even to acknowledge that such sober critiques existed, much less tried to address their substantive points.

Russia’s full-scale invasion of Ukraine, and the mass suffering that it inflicted on innocent Ukrainian civilians, caused the level of intolerance toward advocates of U.S. restraint to spike. Hawks have exploited that shift in sentiment to the hilt. Zealous anti-Russia types demand that anyone who opposes their views be silenced and even criminally prosecuted. The hosts of “The View” lobbied their viewers to insist that the Justice Department investigate (and hopefully charge) Tucker Carlson and former Democratic Rep. Tulsi Gabbard for being Russian agents and committing “treason.”  Host Whoopi Goldberg observed that “they used to arrest people for stuff like this.”

Furthermore, pundit Keith Olbermann called on the military to arrest Carlson and Gabbard as “enemy combatants” and hold them in jail to await trial for “participating in a campaign of [Russian] disinformation.” Sen. Mitt Romney (R-UT), accused Gabbard, a distinguished veteran who had served in combat zones, of circulating “treasonous lies.”

Such rhetoric goes well beyond the usual innuendoes and smears directed against opponents of Washington’s crusade against Russia. They even exceed the stark McCarthyism of Max Boot, another alumnus of the crew that worked so hard to prevent meaningful debate during the build up to the Iraq War. The latest episodes pose outright threats against dissenters, and they’re reminiscent not just of the McCarthy era, but of the even worse domestic repression in World War I. On that occasion, the federal government embraced the “logic” that Goldberg, Olbermann, and Romney use and prosecuted more than 2,100 opponents of the war, sending most of them to prison.

It is especially important that advocates of a foreign policy based on realism and restraint not let such an atmosphere of intolerance prevail again. Not only might it do irreparable damage to America’s already frayed commitment to freedom of expression, but it would prevent discussion of a crucial foreign policy issue — perhaps the most important one since the dawn of the atomic age. The United States already is flirting with dangerous policies that could bring the country into a direct military collision with Russia. Such a clash could easily escalate to the use of nuclear weapons, the ultimate nightmare scenario.

The stakes are far too high to stand by while practitioners of the new McCarthyism again silence dissent. Advocating a policy of caution and restraint does not imply the slightest sympathy for Vladimir Putin or his war of aggression, and we must not allow reckless, unprincipled hawks to get away with asserting that it does.