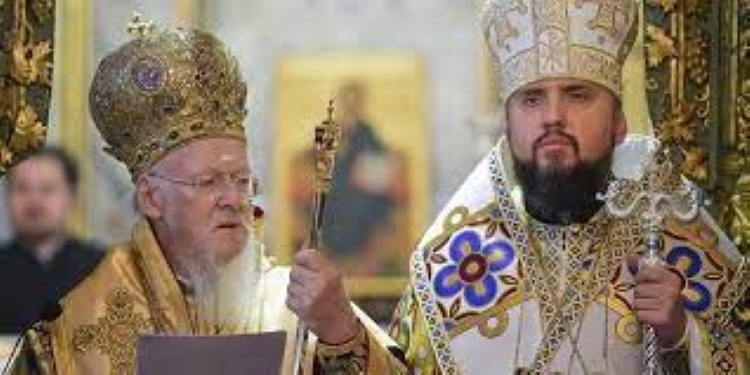 EDITOR’S NOTE (Nick Stamatakis): This is an older post from Jerusalem Post but it is indicative of the attitude of those praised by the West as “good Christians” at the same time as they accuse Patriarch Kirill of supporting the “invaders”… Of all the hierarchs involved, Metropolitan Onufriy of Kyiv, leader of the 70% of Ukrainian Orthodox, whose church (UOC) in under the Moscow Patriarchate has shown a truly holy character…

Killing Russian soldiers isn’t a sin, Metropolitan Epiphanius I of Ukraine, head of the Ukrainian Orthodox Church, said Monday in a telethon, as reported by Ukrainian state media Ukrinform.

“We, as a nation, do not wish death to our neighbors,” Epiphanius was reported to have said. “However, since they came to our land, we’re defending our land. Protecting ourselves is not a sin.”

The archbishop blessed the Ukrainian people in their fight against Russia.

This is not the first statement he has made regarding the Russian invasion of Ukraine: A previous statement in late February argued that “the spirit of the anti-Christ operates in the leader of Russia.”

He claimed that the “signs” were revealed to indicate this, citing “Pride, devotion to evil, ruthlessness [and] false religiosity.”

A MURAL of Russian President Vladmir Putin is vandalized – with red spraypaint and the word ‘Murderer’ written above the original text reading ‘Brother’ – in Belgrade, Serbia, March 6. (credit: Zorana Jevtic/Reuters)

This “was [Nazi leader Adolf] Hitler during World War II,” Epiphanius claimed: “This is what [Russian President Vladimir] Putin has become today.”