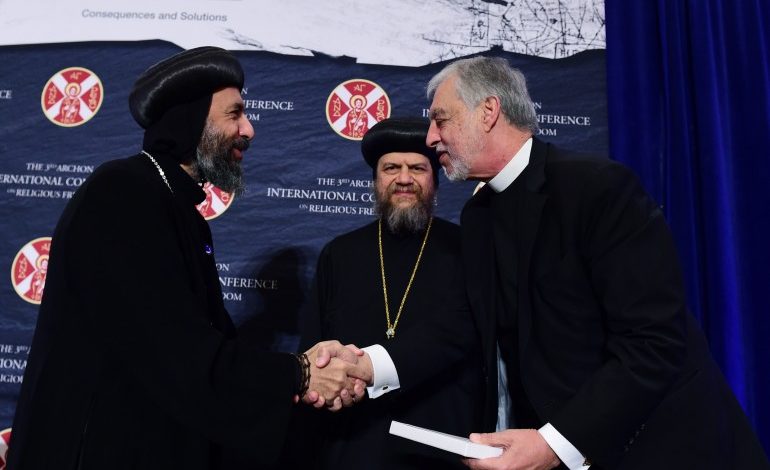 EDITOR’S NOTE (Nick Stamatakis): Why is suddenly Karloutsos in the Balkans on a religious freedom mission, leading the “Archons of disaster”? If you want to know the answer you should look into the supposed “dismissal” of Metropolitan Hilarion of Volokolamsk, in charge of foreign relations of the Moscow Patriarchate, and his transfer to the position of the Metropolitan of Budapest and Hungary.  Most religious news websites insist on this being a “dismissal”, a negative event, that happened because of differences between Hilarion and Kirill… I beg to differ.  It is clear that the hidden side of the Ukraine war is ecclesiastical inter-Orthodox.  Moving Hilarion to Budapest places him in a position to play a central role in applying pressure and consolidating power over the Eastern European and Balkan Orthodox Churches…

This is not the first time the State Dept. sends him in a similar mission recently.  When the War of Orthodoxy (it is not a Schism anymore – it’s a war) was transferred to Africa and intensified there (the Moscow Patriarchate established its own Exarchate in Africa headquartered in Egypt with about 100 priests in various countries), Karloutsos last February suddenly surfaced in Egypt (we assume with bags full of cash – that’s how “business” is done in these cases…) And he met with Patriarch Theodoros of Alexandria – photo below… And yes, “Religious Freedom” is code for fighting the war against the Moscow Patriarchate… 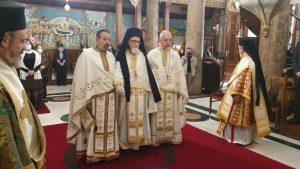 From June 8 to June 19, 2022, a delegation from the Order of Saint Andrew, Archons of the Ecumenical Patriarchate is set to visit Romania, Bulgaria and Greece on a Religious Freedom Mission, during which the Archons and their associates will meet with some of the key religious and political leaders of the respective countries to discuss all-important issues of international religious freedom.

The Mission will begin in Romania. A delegation including Dr. Anthony J. Limberakis, National Commander of the Order; Judge B. Theodore Bozonelis, the Order’s National Vice Commander; Father Alexander Karloutsos, Spiritual Advisor of the Order; Archon Candidate Nawaf Salameh; Archon John Mindala; and Nicholas Kass will arrive in Bucharest on Thursday, June 9, along with an accompanying delegation consisting of Dr. Maria A. Limberakis; Mrs. Helen Bozonelis; and Presbytera Xanthi Karloutsos.

In Bucharest, the delegation will meet with Mr. Sergiu Nistor, Presidential Adviser in the Department of Culture, Religion and National Minorities. Then the delegation will attend the Queen’s Birthday Party, a celebration of the national day of Great Britain organized by the British Embassy in Bucharest, which will provide a good opportunity for the Archons and their associates to meet with Romanian representatives from politics, business environment, the press, and more.

On Friday, June 10, the delegation of Archons will visit the Romanian Patriarchate, where they will be received by His Grace Varlaam Ploieșteanul, assistant bishop to Patriarch Daniel of All Romania and Secretary of the Holy Synod of the Romanian Orthodox Church. That afternoon, the delegation will meet with the Prime Minister of Romania, Nicolae Ciuca.

On Monday, June 13, the delegation will meet in the Parliament of Bulgaria with the chairman and multi-partisan representatives of Bulgaria-USA Parliamentarian Friendship group and the President of the National Assembly (Parliament). That afternoon, the Archons and their associates will meet with Bulgarian Prime Minister Kiril Petkov.

Then on Tuesday, June 14, the delegation will visit, among other notable sites, St. Sofia Church, which is one of the oldest in the Balkans. After that, the Archons and their associates will meet with Bulgarian Patriarch Neophyte; the Delegation will be joined by Metropolitan Anthony of the Bulgarian Church. That afternoon, the delegation has a meeting scheduled with American Ambassador Herro Mustafa at the US Embassy.

Dr. Limberakis; Judge Bozonelis; Father Karloutsos; Archon Mindala; Dr. Maria Limberakis; Mrs. Bozonelis; and Presbytera Xanthi are scheduled to arrive in Athens on June 15. On June 17th they will attend a ceremony to award title of the Emeritus Professor of Environmental Management of the School of Science and Technology of the Institution to His All-Holiness Ecumenical Patriarch Bartholomew.

On Saturday morning, they will be granted a private audience with His All-Holiness in the Presidential Suite, Hotel Grande Bretagne, Athens. Following that, they will attend a U.S. Embassy Reception in honor of His All-Holiness, hosted by the Hon. George J. Tsunis, the U.S. Ambassador to Greece, at the Ambassador’s Residence, followed by a dinner at the Stavros Niarchos Foundation Cultural Center.

The delegation is set to arrive back in New York City on Sunday, June 19.