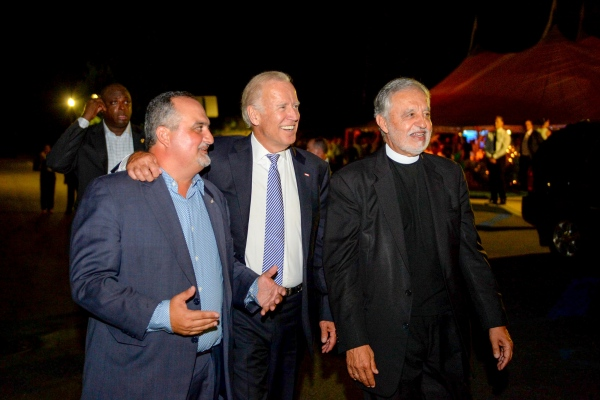 EDITOR’S NOTE (Nick Stamatakis): The Bidens and the Karloutsos Crime Families are inseparable – and Hunter with Mike lead the way… Enjoy the newest revelations about their relationships…============================

Hunter Biden: My Dad Will Take Any Political Position At My Command

The” big guy” might be a reference to Joe Biden, but is Hunter the real big dog here?

“Big guy” was a reference Hunter made reportedly about his father when he was trying to hash out a deal with CEFC China Energy which everyone and their mother knows is in bed with the communist party over there. Joe was supposedly slated to get a 10 percent cut. The deal fell through, but China gave the family some $5 million for their time. Yet, The Washington Examiner was able to access a 28GB encrypted iPhone backup that was stored on Hunter’s laptop which shows the crackhead son might have more pull in this operation.

I’m not joking. A 77-minute recording has Hunter bragging that his father will support him no matter what—and that he will take his political positions at a whim. Is that why the economy and the country are in such rough shape? Because he’s been taking advice from a man who once smoked parmesan cheese thinking that it was crack cocaine? It would make sense. That plus the ongoing dementia are recipes for disaster. Andrew Kerr and Jerry Dunleavy have more (via The Washington Examiner):

Hunter Biden recorded himself boasting that his father will adopt political positions at his command, footage obtained from a copy of his abandoned laptop shows.

“He’ll talk about anything that I want him to, that he believes in,” Biden said in reference to his father, Joe Biden, in the Dec. 3, 2018, recording. “If I say it’s important to me, then he will work a way in which to make it a part of his platform. My dad respects me more than he respects anyone in the world, and I know that to be certain, so it’s not going to be about whether it affects his politics.”

“All those fears you think that I have of people not liking me or that I don’t love myself … I don’t fear that. You know why I don’t fear that? Because the man I most admire in the world, that god to me, thinks I’m a god,” Hunter Biden added in the 77-minute recording, which was taped about five months before Joe Biden launched his successful 2020 presidential campaign in late April 2019. “And my brother did, too. And the three of us, it was literally — I had the support to know I can do anything.”

The recording was located on a copy of Hunter Biden’s abandoned laptop within a password-protected backup of his iPhone XS. Konstantinos “Gus” Dimitrelos, a cyber forensics expert commissioned by the Washington Examiner, located the password during his examination of the hard drive.

In the recording, Hunter Biden bragged to his friend, British artist Phillipa Horan, that he was “better than anybody you know” as the pair discussed matters ranging from Joe Biden’s presidential aspirations, Hunter Biden’s struggles with addiction, an art project the two were working on together, and philosophical musings on how to live a fulfilling life.

Hunter Biden demonstrated that he had at least some influence over his father’s public appearances and scored Joe Biden a promise of political support.

Michael Karloutsos, the son of the Rev. Alex Karloutsos, leader of the Greek Orthodox Archdiocese of America, reached out to Hunter Biden in mid-October 2018 about having Joe Biden appear at an award ceremony later that month. A week later, Michael Karloutsos told Hunter Biden that a “Cathy” or “Kathy” from Joe Biden’s office had said the future president wouldn’t be able to make the event. Hunter Biden replied, “I will [f***ing] kill her. Hold.”

Hunter Biden soon texted Michael Karloutsos that Joe Biden was in Florida at a campaign rally but that he was “calling me as soon as he is out” and that “unless he (himself) said no b/c of some health or family reason I will make this right.” Hunter Biden soon said, “It will happen. Just spoke to him.”

A couple of days later, Michael Karloutsos texted, “We tried. I’m grateful. Thank you.” Hunter Biden was taken aback, replying, “Excuse? We are coming I’ll be there also?” Michael Karloutsos then said Joe Biden’s office had again said the elder Biden couldn’t do it. Hunter Biden replied, “WTF she is crazy call me … We are coming I’ll take care of it don’t cancel plane for him … We are doing it.”

So, is Hunter the puppet master here? It explains why he could be so brazen with some of the meetings he had with shady partners. It explains why he can have a totally covert art career. Joe Biden was going to give him all the protection he needed, and Joe Biden appears to follow his lead. We all knew Joe was lying when he said he has no knowledge of his son’s dealings. He was always neck-deep in it. That’s how Hunter can have cajones the size of Rhode Island when it came to all this stuff. If he’s not the outright shadow president, then he’s like the ‘Kurt Rambis’ of the Biden White House. Someone who is there who shouldn’t have a lot of say in what happens, but somehow does.

Is this the source of the incompetence emanating from this White House? Who knows? There are a lot of people in that orbit who are just outright terrible so it sort of muddies the water there, but the alleged activities of this crime syndicate family just got more interesting.