MAIN PHOTO: Was the Patriarch asked about honoring AB Spyridon? And how AB Demetrios will be honored by AB Elpidophoros? Like he was last time, hidden in the back seats?

Persistent – but fairly trustworthy rumors – about the upcoming “departure” of AB Elpidophoros from the leadership of GOARCH and his replacement by AB Nikitas of Gr.Britain!!  Helleniscope, always many steps ahead of the news, had predicted this eventuality in a prophetic article of September 27, 2021, published after the NYC “Turkish House” debacle and titled “AB Elpidophoros Is Finished… Who Should Replace Him and How?” – where we proposed AB Nikitas Loulias, an American-born hierarch…

Furthermore: Why is AB Elpidophoros consecrating an unfinished Saint Nicholas? What is wrong with one more problematic Clergy-Laity Congress?

When I heard a few weeks ago that Met. Emmanuel of Chalcedon (formerly of France – AKA “Emmanuella”) would be coming to New York for the C-L Congress (July 3-7) an alarm bell started ringing: We all knew that his relationship with AB Elpidophoros had hit bottom a long time ago and they cannot stand each other.  Sending Emmanuel here for the C-L Congress was a clear sign that something was brewing in the background and it had to do with the leadership of GOARCH. Was it that The Patriarchate was afraid of a move by AB Elpidophoros towards “autonomy”?

The trouble had started last January with the so-called “questionnaire” regarding the affairs of the Church.  Initially, it was distributed to only about 80 respondents and it seems that the results were such that forced a wider distribution. It was obvious from talking to many respondents that a uniform answer was given regarding the general questions about the affairs of the Church and that answer included one word: “Autonomy”.  The demand was widespread and it included even those in the “Archons”, as well as major donors; after all, this is America and the respondents were mostly business people and successful professionals or priests and other associates of GOARCH.

There are very few people, if any, in this Church that would support the existing dependence on the Constantinople Patriarchate. It does not make any sense from any perspective to any of us – no matter what justifications Pat. Bartholomew, Karloutsos and the circus around them give… Their goal is purely political – they want to chain this group of wonderful Orthodox faithful around the Patriarchate (and they do the same for Canada, UK, Australia, etc) in order to counter politically the influence of the Moscow Patriarchate.

It never crossed the “leadership’s” mind that the best way to achieve such a goal would be to project in every move and in every speech faith and spirituality – and also adherence to the teachings of Orthodox tradition.  Instead, they did the opposite: they promoted “pan-religion” by visiting and re-visiting the monstrous “Abrahamic House” in Abu Dhabi, they incessantly aimed at the union with the Catholic Church and they demolished everything we deem holy and sacred in Orthodox tradition. The latest example, AB Elpidophoros’s double-faced approach to the issue of abortion. On the opposite, the Moscow Patriarchate (yes, surely led by Russia’s political leadership), despite their equally intense rapprochement with the Vatican, is glowing with faith and spirituality and is taking the opposite, anti-globalist, stance and they have transformed themselves into protectors of traditional family values.

Who do you think is winning the hearts and minds of the faithful?  Certainly not the faithless Constantinople Patriarchate...

In this framework AB Elpidophoros, a declared globalist well before his enthronement, has been making misstep after misstep, for three full years, alienating droves of faithful each time.  The churches were emptying even before covid, but the pandemic accelerated the process.  The reality that I described early on, during 2020, became clear: there was one and only chance for AB Elpidophoros to survive in America and that would be to take the road AB Iakovos left unfinished, the road of autonomy.

At some point, AB Elpidophoros had to face the harsh reality: there is no way for this Church to survive without autonomy and the rumors started spreading.  The fact that Met. Emmanuel became the clear favorite for succeeding Bartholomew simply intensified the rumors; AB Elpidophoros would not “peacefully coexist” with a future “Pat. Emmanuel”, no way… And so it was evident that the two would not work together under any circumstances and that the greater risk for the Patriarchate would by a renewed pursuit of “autonomy” for the Church of America…

The Constantinople Patriarchate – no longer deserving the title “Ecumenical” – had to react against this eventuality of “autonomy” which is becoming all the more widespread… PAt. Bartholomew’s and Karloutsos’s main goal is to maintain the political “integrity” (lol…) of the Patriarchate and not allow any “autonomy” of any sort (the example of the autocephalous Church of Crete comes up again and again recently…)   And so the possibility of AB Nikitas of Thyateira (Gr.Britain) becoming the new Archbishop of America came to the surface recently.  I heard it from at least three trustworthy unrelated sources and when this happens in the news business you know you have to publish it…

Helleniscope, usually many steps ahead of the news, had predicted this eventuality in a prophetic article of September 27, 2021, published after the NYC “Turkish House” debacle and titled “AB Elpidophoros Is Finished… Who Should Replace Him and How?” – where we proposed AB Nikitas Loulias, an American-born hierarch… 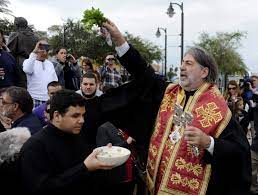 To get a good idea about AB Nikitas (Loulias) please link here... A native of Tarpon Springs, a graduate of Holy Cross, speaker of Russian, graduate of St. Petersburg’s Theological School as well as Thessaloniki’s Theological School, served in Chicago parishes, etc etc… Theologically speaking he dwarfs not only AB Elpidophoros but many Orthodox hierarchs… He is family-related to Congressman Bilirakis and has served to his father’s Mike Bilirakis office for a substantial period… He definitely checks almost all the boxes… Are their blemishes of character from the past? Yes, there are... One hopes that in his late 60s now, Nikitas will leave those blemishes in the past where they belong. One thing is for sure: Nikitas is part and parcel of this Church and this community…

A note of caution: Karloutsos and the Patriarch should not believe that because they will install Nikitas in America they will push back the demand for autonomy – DEFINITELY NOT… This Church needs ample autonomy if it is to survive… Otherwise, it will dissipate as it happens now with droves of faithful, moving to the Antiochean Church and ROCOR… Is this what they really want? To lose Greek-American faithful to other Orthodox Churches that are much closer to Moscow Patriarchate?  And a second note of caution for Met. Emmanuel: Keep your dirty hands off this Church!! You are not welcome in America! Go play your political games in Ukraine (or what is left of it!!)

A few notes about the 46th Clergy-Laity Congress…

I am copying below a few valid points from my good friend George Michalopoulos of Monomakhos.com 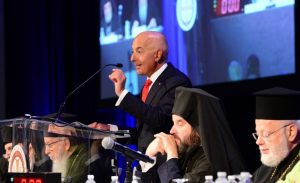 I will have to add the following: 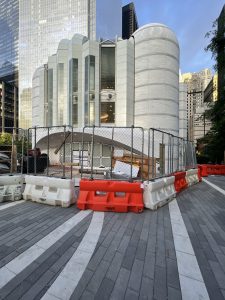 Why AB Elpidophoros is Rushing to Consecrate Saint Nicholas?

We recently reported on the “unfinished business” regarding Saint Nicholas (link here)…  Here are more details from very trustworthy sources inside the Archdiocese: