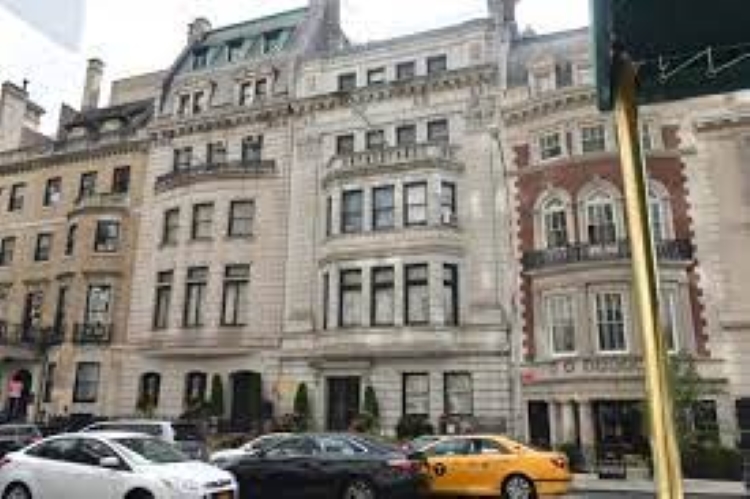 A protest by numerous faithful is being planned outside 79th Street tentatively for next Tuesday, July 19, at 5 pm – stay tuned for more info!!

It would be the joke of the year if it was not true: The atheists of Syriza (yes, this is the political party of Alexis Tsipras who did not even want to take an oath of office on the Bible a few years ago!!) issued an announcement supporting AB Elpidokotonos!!

Yes, my friends, this is the ONLY organization that put together an effort to support him – THE ATHEISTS!!! Their announcement reads like a 19th century marxist manifesto… Let me remind all of you that the atheist marxist groups even at the early stages had forseen that the only way they would have any chance at “changing” society would be to destroy its foundations – and FAMILY and FAITH are the most important ones!!!

NEXT TUESDAY 5 pm A GROUP OF CONCERNED FAITHFUL WILL GATHER TOGETHER OUTSIDE 79TH STREET TO PRAY AND TO PROTEST, TO DEMONSTRATE AND TO DEMAND:

Meanwhile, the faithless Archbishop made believe that nothing is wrong and went on to a divine liturgy in the monastery of Saint John the Baptist in Serres, followed by a Metropolitan of Nea Ionia who also faced “holy hell” for comments favoring homosexuality. He was also followed by the abbot of Moni Xenofontos in Mt.Athos.  Let me note here that many scandals have surrounded this monastery of St. John the Baptist for many years!! 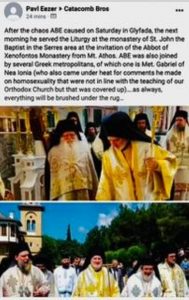 At the same time, it became known that Patriarch Bartholomew, who is visiting Greece, spoke with Archbishop of Greece Ieronymos for at least one hour (some sources say that they met in person in Ioannina) and the subject was AB Elpidophoros’ act to baptize the adopted (through  surrogate mother) children of a gay couple by misleading the local Metropolitan of Glyfada Antonios! The Church of Greece has announced a special session of the Holy Synod for July 18th to discuss this issue extensively!

It is also known that the Patriarchate has also announced a Holy Synod for the 21st of July to make decisions on the GOARCH Charter among many other issues.

Finally, in a separate post, you can read the rebuke by Met. of Pireaus Seraphim of Elpidophoros!!

Let me once reiterate Helleniscope’s position and the position of the majority of the faithful:   ALL PEOPLE, CRIMINALS INCLUDED, ARE WELCOME IN THE CHURCH.  THE CHURCH IS ABOUT SALVATION. But we cannot make their lifestyle or any marginal group accepted as mainstream in our church and community!!

IF ELPIDOPHOROS WAS AN ORTHODOX JEWISH RABBI WOULD HE EVER DARE TO EVEN THINK OF WHAT HE DID LAST SATURDAY NIGHT? ABSOLUTELY NOT!! AND WOULD ANYONE IN THE PRESS DARE SUPPORT HIM? (Not that anybody is supporting him now – beyond the fringe leftists/ATHEISTS of SYRIZA in NY…)

Here is the full text of the LAUGHABLE press release BY THE LEFTIST / ATHEIST SYRIZA:

“The SYRIZA – Progressive Alliance New York Group of Members declares its full support to Archbishop Elpidoforos of America against the immoral attack he has been receiving for a few days from church and far-right circles. These obscurantist and reactionary circles are calling for his removal, due to his performance of the baptism ceremony of two children of a same-sex couple in the Holy Temple of Athens on Saturday 7-9-2022.

This action by the Archbishop, which supports same-sex couples and recognizes the same rights as other citizens, is welcome and absolutely necessary if the Orthodox Church wants to keep pace with the modern inclusive society, without excluding people based on their sexual orientation and of their identity or that of their parents.

The next government of SYRIZA – Progressive Alliance must legislate the right to marry with full rights for all same-sex and non-formal couples, expanding the legislative section introduced in 2015 (Law 4356) by extending the cohabitation agreement to same-sex couples. Equality and equal rights have no exceptions.