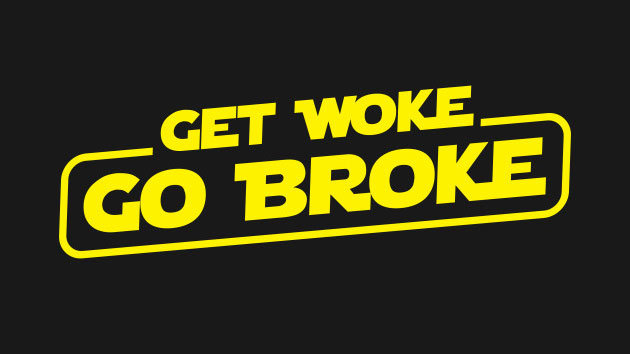 There is something inherently wrong when an Archbishop, as head of the Greek Orthodox Archdiocese Church in America, a respected major religion worldwide aspires to the level of a wanna-be cultural “pop star” and proudly stands united in support as a heretic creating division within the Orthodox Church by breaking with traditional Orthodox canons.

The Bousis-Dundas duo, coupled with the Bousis family as financial benefactors to the Greek Orthodox Church, have created purposely, a “thorny” issue by inappropriately using their money, influence and a baptism to further a secular agenda to which end, Elpidorphoros goes all in for support solo through a back door! 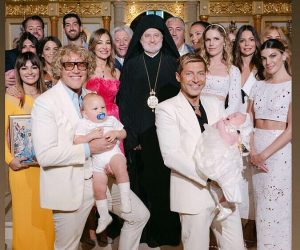 One can say that the “First Church” is now NO different than the Episcopalian Church in embracing WOKENESS with same sex unions and surrogate motherhood by creating a “back door” to sanctioning baptisms of children belonging to homosexual couples.  This is a turning point for the GO Church to which there will be countless secular opinions expressed, but the only one worthy of consideration as the truth is GOD’S.

Nick Stamatakis has carefully chosen a photo of what would otherwise have been kept as a private family memento of the baptismal event, to splash on his webpage just as the National Enquirer would have done on the front page of its newspaper to grab, calling to our attention the outrageously bizarre and abnormal behavior publicly exhibited by a heretic in the highest position within the American Greek Orthodox Church, who claims holiness while hiding behind their vestments.  I ask, as Nick Stamatakis and many others does and do, what jurisdiction does an American Archbishop have in Greece with expatriates from America?  Perhaps the only answer would have been to conduct a ceremony outside of the confines of the Orthodox Church where private family matters would remain as such.  But deception prevails with a more sinister agenda…And why otherwise, would an AB of America have interest in performing this baptism in Greece instead of in the US?

No one likes speaking truths, or more importantly hearing the truth if we are wrong.  Our hackles rise just like it does with a defensive, angry or threatened animal.  Unfortunately, the truth can and does hurt- OUCH!  God didn’t mean for the truth to inflict pain causing us pain and suffering, wounding us UNLESS, it was meant for His glory and edification, correction, and behavioral modification.  We must first confess with our mouths to change which must come from within the spirit of our hearts in order to choose to follow Christ’s path of righteousness. It’s not about the ‘right to be right’ attitude that gets shoved down our faces in abject fear and judgment.  We are called to speak the truth with love and compassion.  Christianity, Orthodoxy, and Catholicism are not a pick and-choose smorgasbord of a religion where deciding what one wants to follow, feels good or resonates while acting and behaving in a contrary manner; following this commandment or church canon while disregarding other divine laws, which don’t either fit, feel comfortable or are too hard with which to abide.

I hear from time to time from other fellow Orthodox friends, people whose comments are made to friends within cliques who view Nick Stamatakis and those of us who write articles and comments as “spewing hateful and hurtful remarks” on his blog, therefore, discounting all that may be written as being labeled “extremist”, having “no standing or credibility” or whatever, but I believe Nick is one brave soul among the very few who possess the courage to articulate what needs to be discussed openly and freely, the truths contrary to popular, cultural and secular belief. Truths we Orthodox Christians or whatever Christian faith you may be affiliated with need to hear!

Simply, if you were to ask for the viewpoints of your parish Priest (and you should) questioning their opinions on the behaviors and actions exhibited and words (or lack thereof) expressed by our beloved (ahem) Elpidoktonos, I think you will find many countless who will agree (perhaps even delicately or secretly) with Stamatakis on most issues about which he writes.  Our Priests, Bishops and Monks feel threatened, blackmailed and betrayed by an Archbishop whose Archdiocese and Patriarchate mind you, has sold out the Orthodox clergy, and its faithful following for unorthodox ethics and behaviors breaking with Orthodox canons of tradition.  And PLEASE, don’t discount the brief mentioning of the criminal facts below under Federal investigation:

2. The illegal funneling of the St. Nicholas Shrine donations dare I mention, which was established to serve as a slush fund for various nefarious purposes.

3. The elimination of the Charter and the 501c3 tax exempt status which continues to receive donations

Clergy and layman are deathly afraid to say what is politically unpopular for fear of retribution and persecution.  But not Nick Stamatakis!  At some point, we must realize that we will be persecuted for our beliefs by standing fully, bravely in alignment with God who is for us IF, we are with Him.

in our churches.  Embracing WOKENESS is the WAY TO BROKENESS if the hierarchical Patriarchate hasn’t figured it out already.  We see the typical left elitist rulers who are seeking the capture and dominion of churches worldwide looking for congregants from all walks of life and denominations to fill the emptying coffers in order to better their lives under the guise of religion.  Yeah, it’s a religion all right!  This action is akin to other Marxist/communist leaders/regimes who are grabbing power and making decisions over the people.  Tyranny.  Loss of freedom/truth.

I’m sorry to inform you GOARCH, but people are looking to our priests/pastors/reverends/clergy to help them get thru these current unprecedented times in which we are living.  And sitting on the fence not wanting to “offend” anyone, whether it be politics, cultural norms, abortion, marriage issues, sexual orientation, etc., etc., doesn’t cut it anymore.  From my perspective, many priests I know speak too esoterically continuing to dance around these “touchy-feely”, hot “taboo” topics saying nothing which can be construed as being committed to an opposing viewpoint.  Even Evangelical pastors who dance around “the elephant in the room” topics are losing congregants who seek other pastors who will speak with truth.

Some of you may say muttering quietly or while speaking to friends privately, “Well, I’m sure that one can always find something in canon law to support a point of view”; Isn’t this a worldly cultural secular viewpoint rather than one which is Biblically based?  I challenge anyone to pull out their Bibles and search for the subject of where God embraces homosexuality and surrogates.

The next response I’ve heard is, “the church is full sinners” (of whom I confess, I am the worst Lord, please forgive me) and is “a hospital for sinners not a museum for saints”.  Yes, we are ALL born into a sinful nature.  You don’t have to physically attend or be a member of a “church” or a “religion” in order to receive God’s unmerited grace to follow Christ’s path of righteousness.  But one misses the point because God gave us all a choice of Free will which is a challenge, a test of our faith in God and His righteousness.  You must ask yourself honestly, are we following Him or leading the way ourselves?  Do we seek daily cleansing for continual renewal of our spiritual minds and bodies?  Do we humbly confess and repent of our sins promising not to repeat our mistakes and past errors?  Elpidophoros stands smiling in the center of this Baptismal family celebration with enormous pride for the actions he committed for a very personal event made into a publicly raucous display of blasphemy and sodomy (Thy shalt not boast).  Remember…Pride comes before the fall.  Lord have mercy.

My dear Readers, there is scripture within the Bible which addresses blasphemy.  It is the story of the cities of Sodom and Gomorrah, two out of the five ancient cities destroyed by God for their wickedness. God abhors homosexuality and sodomy and details what happened to these ancient cities and why.  Do you think because this is the twenty-first century that this cannot possibly happen again?  This controversial topic has nothing to do with the act of baptizing (2) innocent infants but was merely meant as another covert operation concealing the agenda behind the global elitists marching orders for the New World Order and their pervasive attack on Christianity world-wide.  Why I even heard someone proclaim this public baptism as something momentously akin to when AB Iakovos marched with Dr. Martin Luther King Jr. through the lens of history in term of change.  Yeah, it’s “momentous” alright!  Are you proud or embarrassed?

Unfortunately, the wealthy amongst us are the hardest group of individuals to reach spiritually for salvation because they believe in the magic of their very own power over that of God’s will, giftings of talent, blessings and abundance.  We are all merely conduits of God’s abundance and riches and are called to love our enemies and thy neighbor.  It’s like when Barry Soetoro said, “If you’ve got a business — you didn’t build that. Somebody else made that happen.” NO Barry, you too are misguided by a different God and are wrong on all accounts.  God endowed each one of us with a purpose, a unique genetic code of giftings and most importantly, gave us the free will to choose to use and to develop those giftings AND follow Christ, His commandments, covenants, path of righteousness or –NOT.  Our lives work in concert with Christ IF, we follow His will.  Otherwise, it’s called “luck” which is demonic by definition = Chance. I don’t believe in “luck”, I believe in divine providence.  Do you?

I leave you with two scriptures on which to ponder and pray:  It is very hard for a rich man to enter the kingdom of heaven.  It’s like threading a camel through the eye of a needle parable:

A man’s enemies will be the members of his own household:

‘a man against his father,

a daughter against her mother,

a daughter-in-law against her mother-in-law.

36A man’s enemies will be the members

of his own household.’

I find it incredulous how the Greek Orthodox Churches in the United States remained totally silent when the Archdiocese closed all parishes during covid.  No one wanted to buck the system.  This is just one example of a lemming mentality that needs to cease.

If there was just one brave, courageous clergy member (any denomination) who could speak up and gain traction on a national level to encourage folks to take up “arms” alongside God to break the shackles of the tyranny that has befallen the country, just think how much farther we’d be in our quest to effect change.

To me, Elpidophoros’ actions are the tip of the iceberg.  We have seen this in the secular world.  Abortion becomes legal.  Then same-sex marriage becomes accepted, legal.  Transgenderism and sexual fluidity is now becoming the norm.  Refusal to acknowledge the definition of female and the fact that only women can become pregnant—replacing the word “mother” with “birthing people”- is making its way into government policy.  Transhumanism, part human/part bot is next if not stopped.  Woke churches, it seems logical, will also follow suit and align with this new-world ideology.  While as American citizens, we have the right to vote to make our choices and voices heard; as laypeople, individual parishioners, we cannot vote for the hierarchy.  We can protest, sign petitions, write article and send letters; but ultimately, our only solution may be to find another church that better “fits” us.