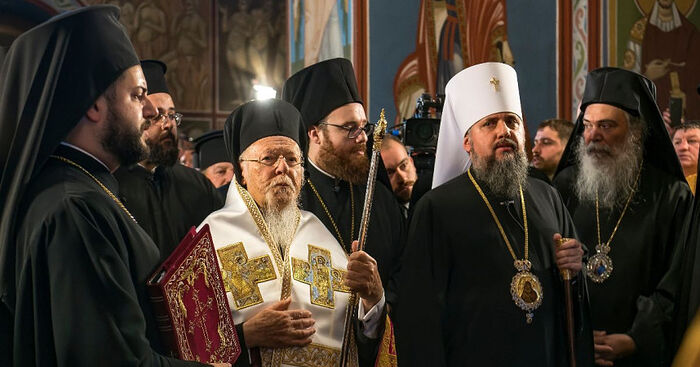 EDITOR’S NOTE (Nick Stamatakis): Schismatic Metropolitan Epiphanios (who currently leads less than 20% of Ukrainian Orthodox), a day after Moscow announced that their military goal now has expanded to the whole of Ukraine, started panicked demands – following the equally panicked demands of Zelensky – for dethroning Patriarch Kirilll of Moscow… As if this will affect Russian Orthodoxy which control the overwhelming majority of Orthodox faithful worldwide…

Let me make a prediction here: Zelensky will soon be assassinated by those who praised him as the new Churchill – he is not useful anymore as the Russians are winning the war… As for us, let’s get prepared to accept Epiphanios as a refugee and foot the bill for his salary until he dies – and he is a very young priest...

In a letter approved by the Synod of the schismatic “Orthodox Church of Ukraine” on Wednesday, “Metropolitan” Epiphany Dumenko accuses Patriarch Kirill of Moscow of heresy and calls upon Patriarch Bartholomew of Constantinople to remove him as the primate of the Russian Church.

The letter was also sent to the primates of all Local Churches, the majority of whom don’t recognize Constantinople’s OCU, but rather recognize the canonical Ukrainian Orthodox Church under His Beatitude Metropolitan Onuphry of Kiev and All Ukraine.

Following on the OCU Synod’s May session, where the “hierarchs” accused the canonical UOC of propagating “the ideology of the ‘Russian World,’” Dumenko calls on Pat. Bartholomew “to initiate at the pan-Orthodox level a review and condemnation of the activities of the Moscow Patriarch Kirill Gundyaev and the ethnophyletistic and racist doctrine of the ‘Russian World’ that he preaches.”

Recall that a similar appeal was sent by hundreds of Ukrainian priests in April.

The schismatic head begins by addressing the war in Ukraine, which he calls a “true genocide of the Ukrainian people,” aimed at destroying Ukrainian statehood, in which hundreds of religious buildings have been destroyed.

While Russian identity has been linked with Orthodoxy for centuries, the Christian faith is now subject to paganization, Dumenko argues. “It has been insidiously replaced by a civil religion that is seemingly based on Orthodox Tradition but alien to the spirit of the Gospel and the content of the Orthodox faith of the Holy Fathers,” he writes. Russian soldiers have cut themselves off from the Church, the unrecognized OCU head states.

However, “the moral responsibility for the committed crimes” lies with Pat. Kirill and other hierarchs, “who for decades propagated the ethnophyletistic and racist doctrine of the ‘Russian World’ and are now blessing the attack on Ukraine,” the letter reads.

While there were hopes for Church revival when Pat. Kirill became primate in 2009, instead, Russian Church collegiality has been destroyed, and the Church is now completely dependent on the Russian state, writes the primate of the OCU, which was founded by former President Petro Poroshenko.

The Russian primate’s focus on geopolitical issues led to joining the creation and promotion of the “Russian World,” which Dumenko calls a “doctrine … about the special role of the Russian nation and state in the world and in the Church.”

He further argues that the “Russian World” distorts Orthodox anthropology by “denying the rights of peoples to historical self-determination or historical fatalism,” by uniting Russians, Ukrainians, and Belarusians into a common civilization and “obliging them to be a part of the ‘Russian World’ or the Russian state for life.”

Dumenko argues that this is also why the Russian Church hasn’t granted autocephaly to the Ukrainian Church.

The “ideology of the modern ROC” is even a threat for the entire world, the OCU primate writes, citing the new African Exarchate that is active on the canonical territory of the Patriarchate of Alexandria. “Starting from at least October 2018, all actions of Patriarch Kirill are subordinated to a specific political goal,” Dumekno states, and this explains the severance of communion with Constantinople, the African Exarchate, and the Patriarch’s support for the war.

Given the above, Pat. Bartholomew and the other primates should condemn the “Russian World” as heretical and Pat. Kirill as schismatic, and thus “deprive Kirill Gundyaev of the right to occupy the Moscow Patriarchal throne.”

Russian Church rep Vakhtang Kipshidze, Deputy Chairman of the Synodal Department for Relations with the Society and Media, commented to rbc.ru that the OCU’s appeal reads like “an attempt to curry favor with the Ukrainian authorities and participate in a campaign directed against everything Russian.”

“I think this attempt is completely impotent and clumsy, because from a canonical point of view it’s complete nonsense. For us, the so-called OCU isn’t a church at all. It’s a schismatic structure whose statements shouldn’t be taken seriously,” Kapshidze concluded.