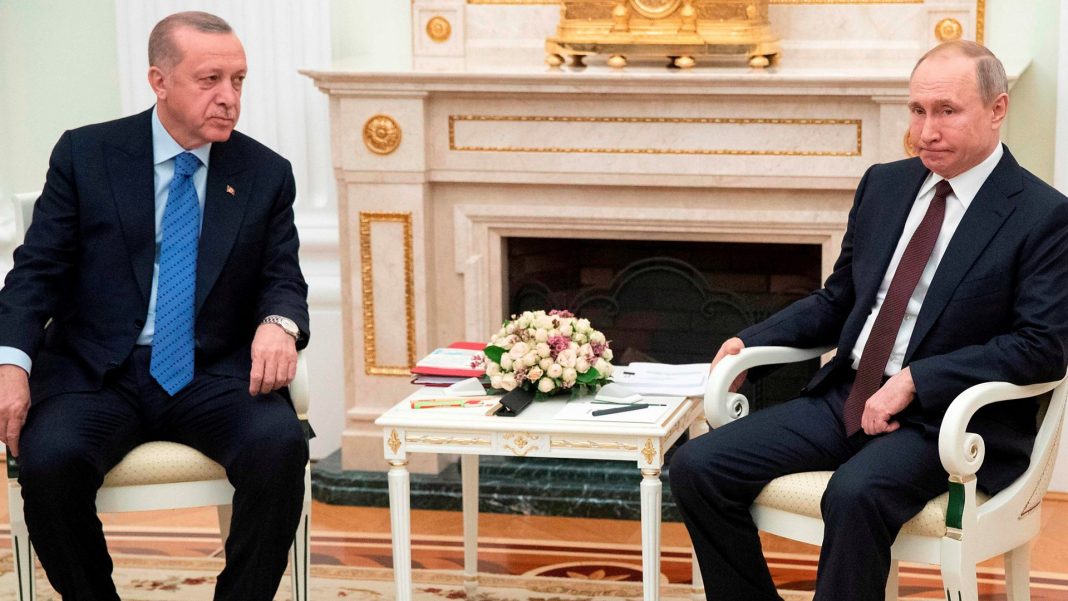 EDITOR’S NOTE (Nick Stamatakis): We have noted several times that Turkey has definitely turned eastward and is currently all but lost for the West – despite its nominal participation in NATO.  Erdogan’s balancing act has tilted towards Moscow and points east: there is a string of countries from Azerbaijan to Kazakstan to Tajikistan to Turkmenistan to Mongolia that speak dialects of Turkish and are on a loose alliance with Turkey.  Turkey just received an injection of $20 Billion from Moscow (from the huge surplus that Russia got because of the failed sanctions) to finish building the huge nuclear power plant in the Mediterranean – which will provide 10% of the country’s energy.  Russia already operates two natural gas pipelines to Turkey across the Black Sea.

It’s very significant that Ramzan Kadyrov, the Chechen leader, was invited by Putin to take part in the meeting, showing that the war in Ukraine was a main part of the agenda.  The war is ending, and there will be spoils to be divided…

Türkiye and Russia will open a new page in ties as a result of ongoing talks in the field of economy and energy, President Recep Tayyip Erdoğan has said as he met Russian President Vladimir Putin in Sochi, only 17 days later their encounter in Tehran.

“The meetings that were conducted by our delegations were very fruitful. They have raised many issues. A new and different page will be opened in our ties when we conclude these talks today,” Erdoğan said before his meetings with Putin in Sochi on Aug. 5.

“Our meeting today is very important because it displays the role Türkiye and Russia are playing in the region,” he said, as the agenda included the developments in Ukraine and Russia.

The two men lastly met in Tehran on July 19 on the sidelines of the Astana Process. The Sochi meeting comes only 17 days after. The ongoing Russian invasion of Ukraine, the implementation of the grain deal, the developments in Syria amid Ankara’s preparations for a new military operation and all the aspects of the bilateral economic, trade and energy relations were on the agenda in Sochi.

Erdoğan cited cooperation between Türkiye and Russia in the field of energy, particularly the construction of Türkiye’s first nuclear plant in Akkuyu, saying, “This Akkuyu issue is important. We want to make an assessment on the Akkuyu plant because it will supply 10 percent of our electricity when completed. It is important that its construction completes on time.”

Türkiye’s first nuclear plant in Akkuyu, Mersin, is being constructed by a Russian firm, Rosatom, in line with an intergovernmental agreement in 2010. The Russian company recently ended its contract with its Turkish partner, creating unease in Ankara.

The two leaders also discussed regional issues, with the topic of Ukraine and Syria atop the list. “Solidarity is needed in the fight against terrorism. I believe the steps we will take together will strengthen our position,” Erdoğan said, referring to Türkiye’s security concerns stemming from the YPG’s presence in northern Syria.

The press secretary of Putin, Dmitry Peskov, acknowledged Türkiye’s concerns in a press conference before the Erdoğan-Putin summit. “Syria will certainly be discussed today. Turkey has legitimate security concerns, which we, of course, take into account,” Peskov said. “But it is very important not to allow any actions that could lead to destabilization of the situation in Syria, or [that] which could jeopardize the territorial and political integrity of Syria,” he added.

Erdoğan had already declared the presence of the YPG terrorists in Tal Rifat and Manbij provinces of Syria as the target of Türkiye’e potential offensive. He called on Russia and Iran to support this operation because the YPG is causing a major threat to the political and territorial integrity of Syria.

Putin thanks Erdoğan for grain deal

The two leaders also elaborated on the establishment of a grain corridor in the Black Sea for Ukraine to resume its exports to the world markets in a bid to circumvent a global food crisis.

Russia and Ukraine signed two separate memorandums of understanding with Türkiye and the U.N. on July 22 and the first ship carrying corn passed through the Turkish straits for its final destination, Lebanon, on Aug. 3.

Putin thanked Erdoğan for his personal efforts to make these deals happen, stressing that supplying wheat from Ukraine and fertilizers from Russia to underdeveloped countries will prevent a food crisis.

The Russian leader also informed that Russia continues to supply natural gas to Türkiye, adding, “This gas is also transferred to Europe via Türkiye. So the European consumers should be thankful to Türkiye for the uninterrupted flow of natural gas.”

The fact that Russia is under heavy sanctions from the West, its economic and trade ties with Türkiye have become much more important because Ankara has rejected to implement these sanctions.

Peskov informed that Turkish and Russian officials discussed cooperation in different fields in the past two days and will submit their report to the leaders. Deputy Prime Minister Alexander Novak led the Russian delegation, Peskov said, adding, “He carried out complex work with Turkish colleagues in Sochi for two days. They will just report [about this] to the two presidents.”