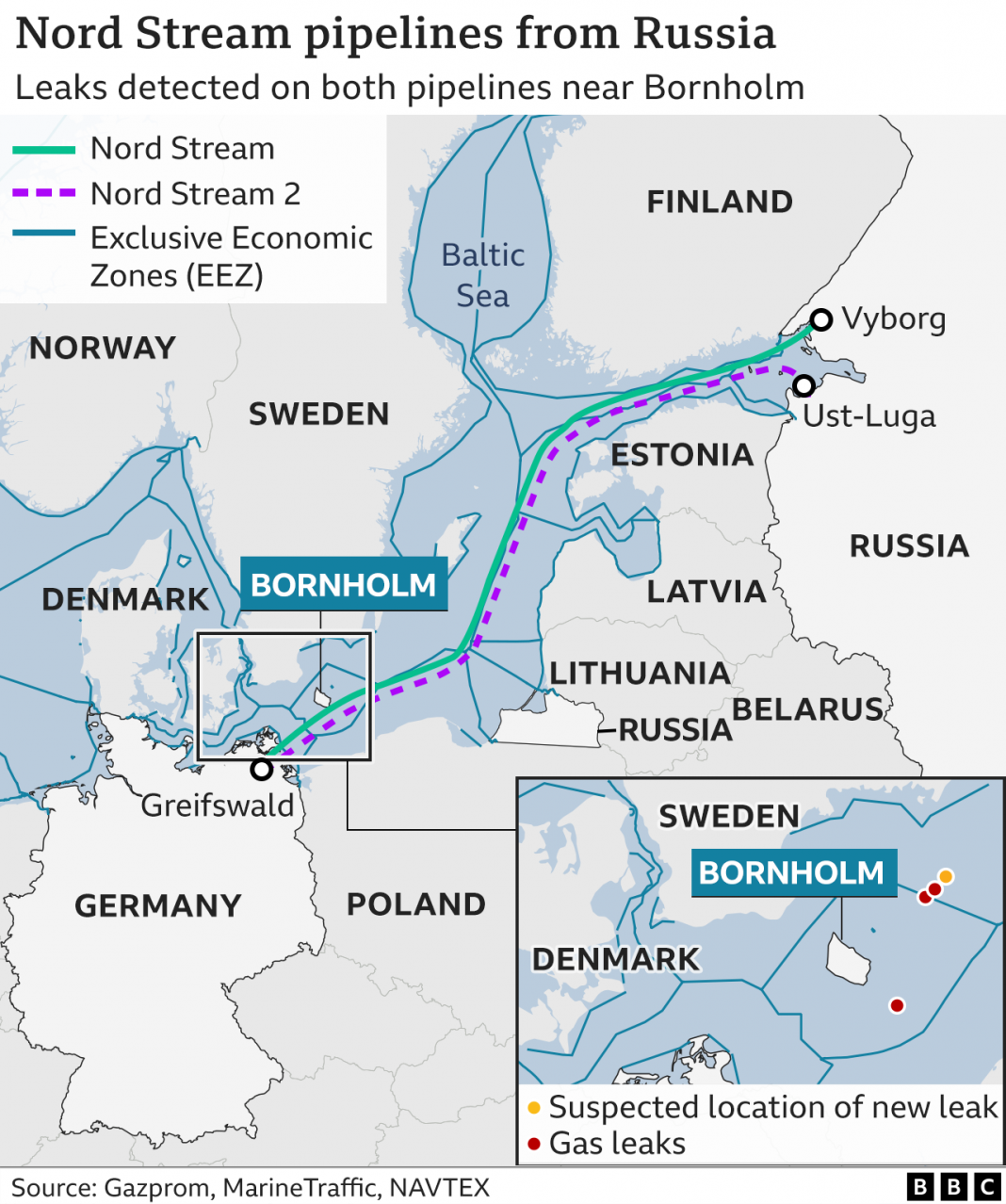 EDITOR’S NOTE: The developments on the war front in Ukraine and in Europe are running on overdrive.  Russia finished with the referendums in the 4 occupied areas in the South and East, and it now occupies, including Crimea, about 22% of former Ukrainian territory producing 80% of its GDP.  The West’s response was to blow up the two Nordstream pipelines. Putin was quick to note this and added many other important statements in a quite remarkable speech (link here for the full text). Below you can see the two Greeks, Alex Christophorou and Alex Mercuris analyze Putin’s speech. Finally, read an analysis by Dimitris Konstantakopoulos regarding the effects of blowing up the pipelins…

“Thank you USA” writes on his twitter account the former Foreign Minister of Poland, member of the Steering Committee of the Bilderberg Club and current MEP Roman Sikorski .  (https://news.antiwar.com/2022/09/27/explosions-cause-major-damage-to-both-nord-stream-pipelines/). Sikorsky is referring to the sabotage, according to all indications, of the two undersea Nord Stream pipelines able to carry natural gas from Russia to Germany. Sikorsky rejoices that Russia is paying the price for Ukraine and sees the twenty billion-dollar pipeline lying useless in the depths of the Baltic Sea.

The United States deny of course having any connection to the pipeline sabotage. But normally suspicions are falling on them, given the numerous declarations by US officials against the pipelines. Last January for example, President Biden himself had the following dialogue with journalists:

Pres. Biden: “If Russia invades…then there will be no longer a Nord Stream 2. We will bring an end to it.”

Reporter: “But how will you do that, exactly, since…the project is in Germany’s control?”

As for Assistant Secretary of State Victoria Nuland (and one of the protagonists of the coup d’ etat in Kiev back in 2014) kas said as much last January: “If Russia invades Ukraine, one way or another, Nord Stream 2 will not move forward” (underlined by us).

Now Zelenski has rushed to accuse Russia of being responsible of the sabotage. This claim is rather ridiculous as it was ridiculous his other claim that Russian were bombing the nuclear power station in Zapirizhie, which the occupy (or the accusation against Putin that he is responsible for the assassination of a Russian journalist supporting his Ukrainian campaign in Moscow).

Although ridiculous, such claims are useful to the extremist forces and secret services which control and use him as an international provocateur the Ukrainian President, in order even to intervene in the internal life of Germany and on behalf of the international “war party”.

In a public environment in the West which is dominated by anti-Russian hysteria, it is almost impossible to find media outlets that expose the ridicule of such claims, not least out of fear of appearing pro-Russian.

Faced with the dilemma of believing the means they trust or their minds against them, citizens are thrown into widespread confusion. This is also the Goebbels’ logic: say, say, something will remain.

With both pipelines in good condition, Russia largely holds Germany’s energy supply in its hand. Moscow can supply gas if it wants or can refuse to supply it. For the pipelines to be a weapon in its hands, as Bloomberg argues, Russia needs pipelines to exist and be able to function.

But if the pipelines are in working condition, Germany can also, if it decides to change its policy on Ukraine, for example under pressured by lack of energy, immediately restore the full flow of Russian gas to itself.

On the contrary, with both pipelines out of service, Berlin is desperately dependent on the US for its energy supply, so it will be much harder for it to change policy on Ukraine, if it will wish.

In other words, what the sabotage of the two pipelines accomplish is that it deprives one the one hand Russia of its “weapon” and on the other it is binding Germany and, in a more general way, Europe, on the NATO course of continuous war against Russia. It proves that way, once more, that here we don’t have only a war against Russia, but, also, an indirect war against Europe launched by the “Empire”.

It is Europe which is paying the cost of sanctions, its economy being now under the threat of complete collapse, especially as the conflict around Ukraine intensifies. European states, their economy, their armed forces and their secret services become more than ever dependent on the USA. Europe loses any possibility of cultivating any kind of equilibrated relations with Washington and Moscow, which is a prerequisite of any European autonomy. It is transformed into a total vassal of the United States (Oscar LaFontaine: “Germany is Acting as an American vassal in the Ukraine War” | Defend Democracy Press) and of the “super-imperialist” (to use Kautsky’s terminology) international Empire of Finance which rules the “collective West”.

This must not be a surprise for those acquainted with US and, in particular, Neocon strategies. One of the main ideas which are underlying their texts like for example the Wolfowitz report or the Project for a new American Century, is that Washington must do everything it can in order not to permit to two of the minor power poles of the world (for example Europe and Russia or Russia and China) to develop special relations between them, because in that case they would challenge the global domination of the United States.

The destruction of European – Russian relations is a secondary, undeclared but very important goal of the Ukrainian policy of the United States since many years. A manifestation of this policy we had during the Ukrainian crisis of 2014. Then, the French, the German and the Polish Foreign Ministers went in Kiev and negotiated a deal permitting a peaceful way out of the crisis. The coup perpetrators, including the Right Sector and other far right paramilitaries waited until their plane left Kiev and, immediately after, launched their provocation followed immediately by their armed coup d’ etat against Yanukovitch.

One phrase pronounced then by Victoria Nuland became famous: “Fuck the EU”.

We must point now to the fact that too few states have the technical capacity to undertake an operation like the one against the Nord Stream and, also, a reasonable chance to keep it secret for a long time after it. I believe we are advised not to jump to conclusions as to which one was directly responsible.

On the contrary it is almost certain that the sabotage of the pipelines (while the referendums in Donbass and elsewhere were taking place), was planned and decided by power centers of the “deep Empire” and the “War Party”, controlling all the “collective West” and even the United States itself. We have seen the action of this party on several occasions not only on the front of the Ukrainian crisis, but also of those in the Middle East and China. Now they seem to have hijacked, in a way, all the western political establishment.

By the way, Mrs. Victoria Nuland is a key person connecting all those “fronts”. She was the Republican’s Dick Cheney advisor when he launched the wars in the Middle East and she was also Assistant Secretary of State under the Democratic President Obama, when the Ukrainian crisis erupted.

As long as the War Party faces no serious resistance either from the Western political, economic and media establishment, or from mass movements and parties in Europe and America, or the supposed “intellectuals”, it can generalize without limitations the conflict with Russia. They will not provoke the defeat of Russia as they hope, but they tends to lead the “collective West” to (“neoclassical” or “postmodern”) neo-fascism and to full World War.

Unfortunately, most European politicians, intellectuals, analysts or activists, even supposed radicals among them, as they have lived all their life in relatively free and prosperous times seem to be organically unable to fully realize to what kind of precipice we are heading and act accordingly.