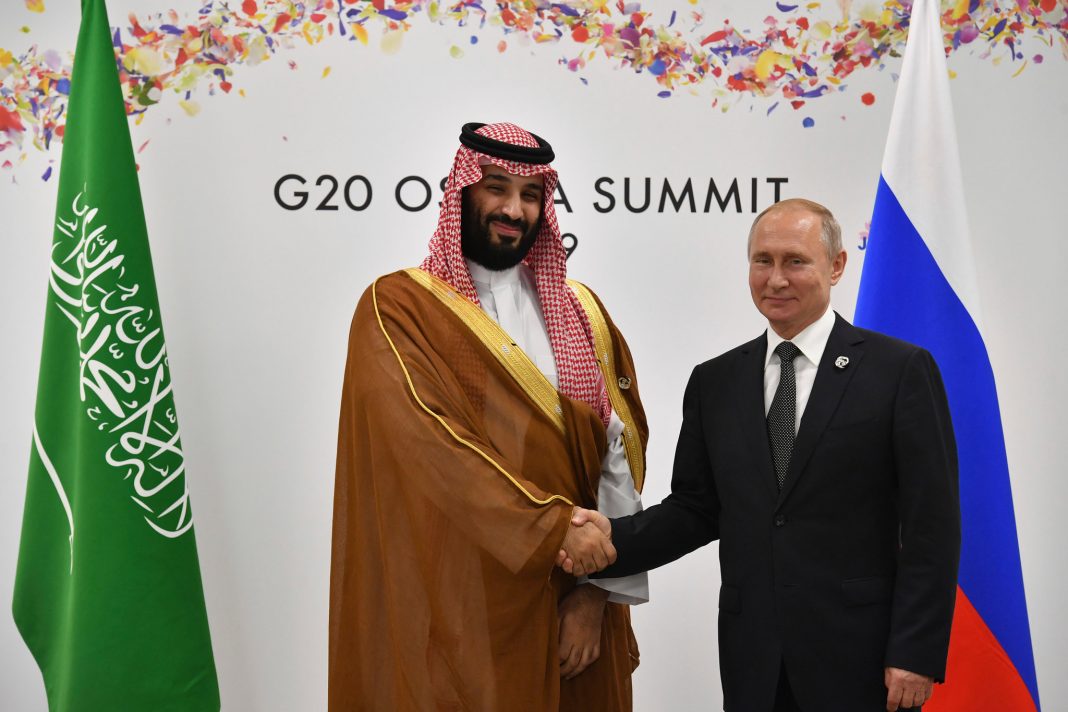 In the biggest news of the day, OPEC+ (the mainstream media in unison avoid telling you that the “+” in OPEC+means Russia) decided to cut oil production by 2 million barrels a day, defying the U.S. Let me remind you here that Biden visited Saudi Arabia recently trying to convince the Saudis to reverse course.  As you know, the Saudis are the main foundation for the “petrodollar,” in other words, for the sale of oil internationally in USD.  In exchange, the US promises the Saudis to support them against their main adversary, Iran, guaranteeing their security.

The useless and corrupt US leadership has managed to alienate the Saudis, who last Spring agreed to be paid by China in yuan for their oil, at the same time as they are making secret and no-so-secret deals with Russia.  It is obvious, even to the untrained eye, that Russia has replaced the US in the Middle East region after its huge victory in Syria. The Russian leadership now guarantees that Iran will not bother Saudi Arabia.  Russia and Iran are approaching a momentous strategic alliance, and they are participating in the North-South transport corridor from Russia straight to the Persian Gulf.  At the same time, Iran has supplied Russian forces with very effective drones that are wreaking havoc against the Ukrainian/NATO forces.

The short-term result will be very expensive oil – despite the economic slowdown – for all of us in the West (India, China, Turkey, Hungary, and many other countries have signed special deals with Russia, and they get cheap oil and gas).  Yes, my friends, the West will finance Russia as it is about to launch its offensive at the end of October in Ukraine! Long-term, the status of the dollar as a reserve currency will erode further, and it is a matter of time before it is demolished to a second-grade status.  Let’s all pray that the crazy globalist western elites will not revert to nuclear weapons to “hold on to their power”…

But do you think the US is not buying Russian oil RIGHT NOW?  You are WRONG if you said no… Most American refineries are configured to process heavy crude oil, mostly Venezuelan and Ural/Russian, and not the light sweet crude produced in Texas or by shale fracking.  We do not import any Venezuelan oil right now.   Still, we import a lot of Russian oil – hence the State Department is very silent when accusing Greek shipowners of doing business with Russia.  Please link here for more information...

Oil prices have fallen to roughly $80 from over $120 in early June amid growing fears about the prospect of a global economic recession.
Bloomberg | Getty Images

A group of some of the world’s most powerful oil producers on Wednesday agreed to impose deep output cuts, seeking to spur a recovery in crude prices despite calls from the U.S. to pump more to help the global economy.

OPEC and non-OPEC allies, a group often referred to as OPEC+, decided at their first face-to-face gathering in Vienna since 2020 to reduce production by 2 million barrels per day from November.

Energy market participants had expected OPEC+, which includes Saudi Arabia and Russia, to impose output cuts of somewhere between 500,000 barrels and 2 million barrels.

The move represents a major reversal in production policy for the alliance, which slashed output by a record 10 million barrels per day in early 2020 when demand plummeted due to the Covid-19 pandemic. The oil cartel has since gradually unwound those record cuts, albeit with several OPEC+ countries struggling to fulfill their quotas.

Oil prices have fallen to roughly $80 a barrel from more than $120 in early June amid growing fears about the prospect of a global economic recession.

The production cut for November is an attempt to reverse this slide, despite repeated pressure from U.S. President Joe Biden’s administration for the group to pump more to lower fuel prices ahead of midterm elections next month.

OPEC+ will hold its next meeting on Dec. 4.

The White House said in a statement that Biden was “disappointed by the shortsighted decision by OPEC+ to cut production quotas while the global economy is dealing with the continued negative impact of Putin’s invasion of Ukraine.”

It said that Biden had directed the Department of Energy to release another 10 million barrels from the Strategic Petroleum Reserve next month.

“In light of today’s action, the Biden Administration will also consult with Congress on additional tools and authorities to reduce OPEC’s control over energy prices,” the White House said.

The statement added that the OPEC+ announcement served as “a reminder of why it is so critical that the United States reduce its reliance on foreign sources of fossil fuels.”

To be sure, the burning of fossil fuels, such as coal, oil and gas, is the chief driver of the climate emergency.

Speaking at a news conference, OPEC Secretary-General Haitham Al Ghais defended the group’s decision to impose a deep output cut, saying OPEC+ was seeking to provide “security [and] stability to the energy markets.”

Asked by CNBC’s Hadley Gamble whether the alliance was doing so at a price, Al Ghais replied: “Everything has a price. Energy security has a price as well.”

Energy analysts said the actual impact of the group’s supply cuts for November was likely to be limited, with unilateral reductions by Saudi Arabia, the United Arab Emirates, Iraq and Kuwait likely to do the main job.

What’s more, analysts said it is currently difficult for OPEC+ to form a view more than a month or two into the future as the energy market faces the uncertainty of more European sanctions on non-OPEC producer Russia — including on shipping insurance, price caps and reduced petroleum imports.

“In its own words, OPEC’s mission is to ensure an adequate pricing environment for both consumers and producers. Yet the decision to reduce output in the current environment runs counter to this objective,” Stephen Brennock, a senior analyst at PVM Oil Associates in London, said in a research note.

“Further squeezing already-tight supplies will be a slap in the face for consumers. The selfishly motivated move is aimed purely at benefiting producers,” he added. “In short, OPEC+ is prioritising price above stability at a time of great uncertainty in the oil market.”

WATCH NOW
VIDEO04:25
Could a decision to cut 2 million bpd from the oil market push more people into poverty?

Rohan Reddy, director of research at Global X ETFs, told CNBC that the group’s decision to impose production cuts could see oil prices rally back to $100 a barrel — assuming no major bouts of Covid globally and the U.S. Federal Reserve not becoming unexpectedly hawkish.

“Due to the decision, volatility will likely return to the market, and despite concerns about the resilience of the global economy, the oil market is tight, all of which should serve as a tailwind for prices in the fourth quarter,” Reddy said.

He added that while a return to $100 oil is possible, “a more likely scenario in the short term is that oil prices hover in the $90 to $100 range as the market digests economic data releases.”