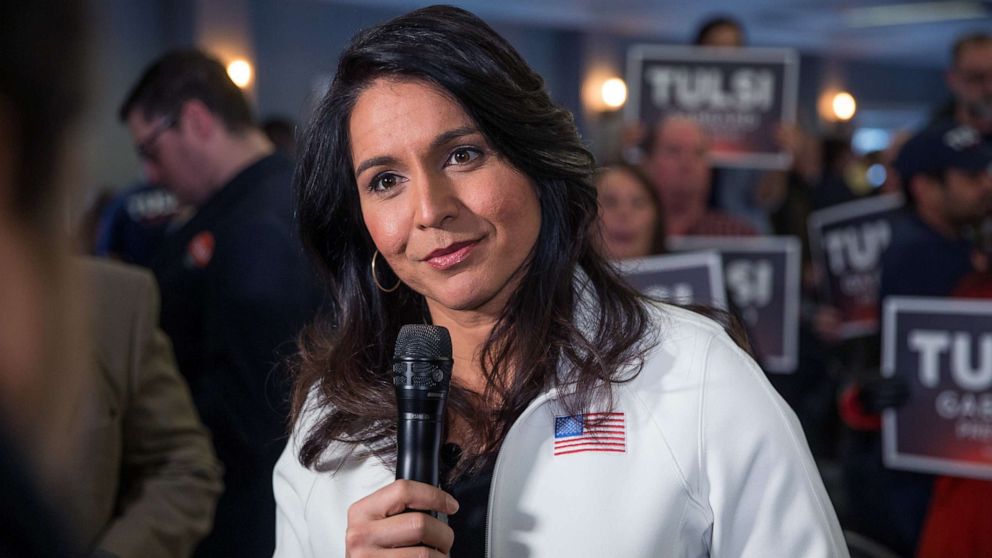 Less than four weeks before the Nov. 8 mid-term elections, yesterday’s announcement by Tulsi Gabbard was guaranteed to affect the outcome of this critical vote more than any other event, including the establishment’s failure in Ukraine emerging in the weeks ahead… Here are the reasons:

BELOW ENJOY PART OF TODAY’S APPEARANCE BY TULSI GABBARD ON JOE ROGAN’S PODCAST – the video has over two million views! The actual podcast was even more popular…  AND THEN HER ANNOUNCEMENT YESTERDAY…

Tulsi Gabhard, a former 2020 Democrat presidential candidate hauled off and punched the Democrat Party right in the mouth on Tuesday, then quit and started a podcast, “The Tulsi Gabbard Show.”

The quitting wasn’t much of a surprise, not after Democrats and their media allies rolled in political filth and portrayed Gabbard, an Iraq War veteran, as a traitor and Russian agent for daring to challenge the bi-partisan establishment War Party that seems determined to walk the U.S. ever closer to nuclear war.

And quisling Combine Republicans like the vengeful U.S. Sen. Mitt Romney, the milquetoast of Utah also known as “Reek,” and Jacobin sports media flamethrower Keith Olbermann branding her as a traitor and Putin stooge.

“When powerful, influential people make baseless accusations of treason,” she said in April, “they are sending a message to all Americans: if you dare to criticize the establishment’s narrative, you will be smeared and discredited. If this is allowed to continue, our democracy will be no more.”

But it does continue, aided and supported by media in displays of Orwellian hate directed at those who question the regime.

Yet on Tuesday,  just four weeks until the midterm elections, Gabbard landed a whopping roundhouse punch. You might say that she witch-slapped the Democrats, but she hit them with a closed fist.

The party is deeply in trouble, and is on the verge of losing control of the House of Representatives and the Senate over kitchen table issues that are the result of Democrat policy, from inflation to rising gas prices, the rising cost of food and rising violent crime.

But Gabbard took aim at another issue, her party’s  reliance on what was once an extremely illiberal behavior used exclusively by the McCarthyists of the post-war right, with their blacklists and compulsory loyalty oaths. These new jacobin Democrats became addicted to cancel culture the way the old French revolutionaries became addicted to Madame Guillotine. Rather than rely on the weight of the plunging blade, they silenced their enemies through cancel culture. And they’re still busy, cancelling using their many allies in media to lop the heads.

Gabbard released a statement on a video at Twitter, and further elaborated in a post on her Substack page and podcast

“I can no longer remain in today’s Democratic Party that is under the complete control of an elitist cabal of warmongers who are driven by cowardly wokeness who divide us by racializing every issue and stoking anti-white racism, who actively work to undermine our God-given freedoms enshrined in our Constitution, are hostile to people of faith and spirituality, who demonize the police but protect criminals at the expense of law-abiding Americans, who believe in open borders, weaponize the national security state to go after political opponents, and above all, are dragging us ever closer to nuclear war,” said the former U.S. Rep. from Hawaii and the candidate who was once gushed over by the media.

Is she wrong in anything she’s said?  No. Particularly the part about America being dragged ever closer to nuclear war.  Just tell me where she’s  wrong. She’s not wrong. And that’s what drives the Democrats mad,

National Democrats are driven by the cowardly woke who play the race card diving the nation at every turn. If you pay attention to the news, if you’re sober and literate, then you know this.

And Biden who foolishly didn’t mind all that much if Putin invaded Ukraine back when Biden was babbling it would be acceptable if it was only “an incursion” has now come unglued. The doddering old man is now talking publicly of “Armageddon” and the bi-partisan Washington War Party that so easily and wrongly condemned Gabbard as a “traitor,” stumbles with him toward nuclear confrontation.

“We have not faced the prospect of Armageddon since Kennedy and the Cuban Missile Crisis,” Biden said last week at a fundraiser—he always seems to pop his cork at fundraisers. The Missiles of October crisis of 1962 put the United States and the Soviet Union on the verge of nuclear war for almost two weeks.

What drove Gabbard to hammer at her former party?  I don’t know. Almost immediately she was set upon by Democrat establishment media attack dogs from “Rolling Stone” magazine and elsewhere. The Democrats will feel compelled to burn Gabbard.

I’m sure America’s most well-known political troll, Hillary Clinton, has them gathering up dry firewood for a bonfire to her Clintonian vanity. And in the things you learn while looking up other things department,  the word “bonfire” comes from old English, literally  “fire of the bones.” So, Clinton was willing enough to torch and destabilize the U.S. by attributing her 2016 election loss to that Russia collusion fantasy she paid for. And she was protected by corporate legacy media. What’s another witch-burning to her now?

A few days ago, Vice President Kamala Harris appeared on late night television with noted Martha’s Vineyard Soy Boy Seth Meyers, and joked with him about how much she loved the new Game of Thrones fantasy. In that softball interview, she commended Biden for his compassion for those convicted of marijuana related crimes before pot became a government revenue source.

“Americans agree,” said Harris. “Nobody should have to go to jail for smokin’ weed, right?”

Yet neither Harris, famous for her word salads delivered with a kitten voice, or Meyers, who played Barack Obama’s wingman at a White House Correspondents Dinner and verbally goaded Donald Trump into becoming president in 2016, bothered to mention the important thing:

As a candidate for the Democrat presidential nomination, Gabbard called out Harris, the former California attorney general for prosecuting almost 2,000 people, for possession of the weed, then put them in jail.

When asked, Harris laughed about it.

The issues in November aren’t all that complicated. And for all the gaslighting going on by media and politicos, they are quite simple.

We measure the cost we paid for things a couple years ago, before the Democrats took control of the government, before the Biden Harris administration was elected. And we compare them to the cost of those same things now. The high cost of food, the high cost of gas to get to work. The price of eggs and of coffee. Of bread for our families. And if you live in a blue city, the high price of violent crime in a blue state.

That might be the highest cost. Gabbard nailed it. That cost of trying to survive in a big city environment with violent crime rising. The cost is violent anarchy and constant threat to your loved ones, even as Democrat public officials demonize the police and protect criminals at the expense of  law-abiding citizens, even to the point of ending cash bail altogether for violent offenders and releasing them rather than keep them in jail.

In crime-ravaged Chicago for example,  in the Democrat political laboratory known as Cook County, the experiments have been ongoing for years now.

And many are now saying what others have said before, even as many tried to ignore it. The corporate media, of course, ignored it as did the political class. But there is no ignoring it now, is there? Gabbard just said it clearly on Tuesday so all Americans could hear.

And she’s not alone.