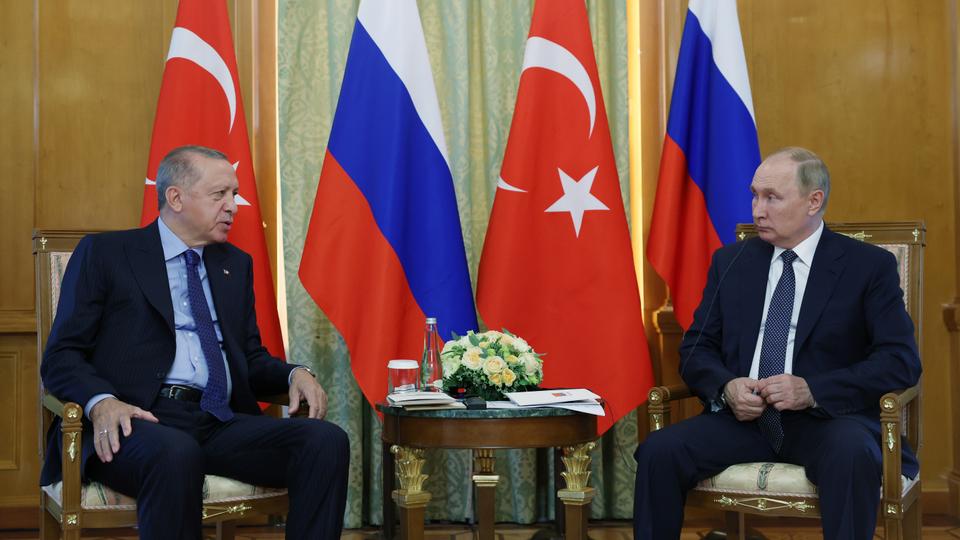 EDITOR’S NOTE: President Putin is making one proposal after the other for obvious reasons.  Yesterday he offered to send natural gas to Germany through one of the two Nordstream2 pipelines that were not damaged.  Today he made an offer to Turkey to become a new gas hub for Europe.  Obviously, the first goal for Putin is to create more schisms within the West – and it would be very easy if the European leaders were not complete puppets… Instead, they choose to destroy their economies by refusing to take charge of their fate… Until when? you may ask… Well, “old man winter” came early this year in Europe, and it is bound to speed up the developments…

ANKARA, Turkey (AP) — Russian President Vladimir Putin on Thursday doubled down on his proposal to turn Turkey into a gas hub for Europe after deliveries to Germany through the Baltic Sea’s Nord Stream pipeline were halted.

Putin floated the idea of exporting more gas through the Turk Stream gas pipeline running beneath the Black Sea to Turkey as he met with Turkish President Recep Tayyip Erdogan on the sidelines of a regional summit in Kazakhstan.

It’s the second unlikely energy proposal that Putin has pitched in as many days, with European leaders calling Russia’s cuts in natural gas a political bid to divide them over their support for Ukraine. It’s created an energy crisis heading into winter that has fueled inflation, forced some industries to cut production and sent utility bills soaring.

“This is just another attempt by Russia to use gas as a geo-strategic tool to weaken EU and NATO countries,” said Simone Tagliapietra, an energy policy expert at the Bruegel think tank in Brussels.

Russia was “tempting Turkey to becoming an energy hub — a long lasting strategic aim of the country — while trying to create new divisions among European countries,” the analyst said, adding that Putin’s strategy was not likely to succeed.

A day earlier, Germany rejected Putin’s proposal to step up gas flows to Europe via a link of the Nord Stream 2 pipeline under the Baltic Sea – a pipeline that has never been operational. Moscow has cut off the parallel Nord Stream 1 gas pipeline over what it claimed were technical problems.

The Russian leader first voiced the proposal on Wednesday, saying that Russia could increase the volume of its gas exports to Turkey through the Black Sea pipeline.

“We could … make the main routes for the supply of our fuel, our natural gas to Europe through Turkey, creating in Turkey the largest gas hub for Europe — if, of course, our partners are interested in it,” Putin told a Moscow energy forum.

On Thursday, he said the hub could help regulate “exorbitant” prices. “We could easily regulate (prices) at a normal market level, without any political overtones,” Putin said.

“Putin is in a desperate situation. Nord Stream 1 and 2 are not operational and are unlikely to be operational for a long while,” said Mehmet Ogutcu, chairman of the London Energy Club. “Europe has made clear that it will not enter an engagement (with Russia) as long as the war in Ukraine continues.”

Ogutcu said Turkey was likely to tread carefully, wary of further increasing its dependence on Russia.

“There is a delicate balancing act (by Turkey). If the balance tilts too much toward Russia this will damage (Ankara’s) relations with the West,” Ogutcu said.

Erdogan did not comment publicly on the proposal but Putin’s spokesman, Dimitry Peskov said Turkey has reacted positively to the idea. Officials from Erdogan’s office could not immediately be reached for comment.

Turkey’s state-run news agency however, quoted Turkish Energy Minister Fatih Donmez as saying on Wednesday that it was “too early to assess” the proposal.

“Technically it is possible,” Anadolu Agency quoted Donmez as telling reporters at the same Moscow energy forum. “For such international projects, technical, commercial and legal evaluation and feasibility studies need to be conducted.”

NATO-member Turkey, which is depending on Russian for its energy needs and tourism, has criticized Moscow’s actions in Ukraine but has not joined U.S. and European sanctions against Russia. It has maintained its close ties with both Moscow and Kyiv and positioning itself as a mediator between the two. Ankara recently helped broker key deals that allowed Ukrainian to resume grain exports and led to a prisoner swap between Ukraine and Russia.

Although Russia is still conveying gas to Europe via Ukraine, the amount has plummeted drastically with the two Baltic pipelines out of commission.

The Nord Stream 2 pipeline never came on stream because Germany blocked its operation just before Russia launched its invasion of Ukraine on Feb. 24.