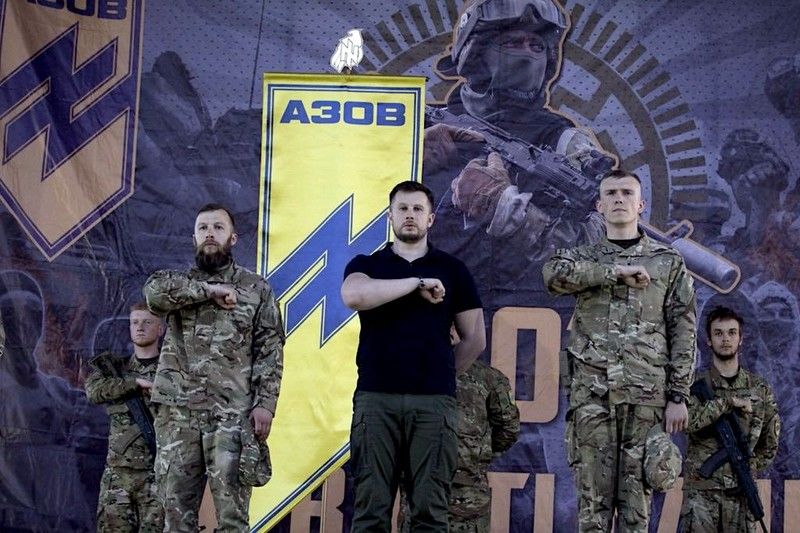 EDITOR’S NOTE: Of course, Turkey would mediate and take these criminals to keep them “in comfortable conditions” until the end of the war!!… It was the right thing to do with the always “neutral” position Turkey plays in major wars…  And now they have no problem at all being the middlemen again… As you will see in another post today, Putin is trying to entice the Turks by proposing to them to become the new natural gas hub for Europe…. Please read below and follow the link to strategic-culture.org…

SOURCE: STRATEGIC-CULTURE.ORG
Nazis in Turkey: Who Is the Leader of the Azov Battalion That Came to Ankara?
By Erkin Öncan

Although Turkey follows a ‘balanced’ position in the Ukraine crisis, this balance can often evolve into a zig-zag policy. If this deviation happens to Azov members in Turkey, get ready to watch the heroic stories of Azovists in the Turkish media.

As part of the prisoner exchange between Russia and Ukraine, it was learned that 5 Ukrainian commanders, including the senior leaders of the neo-Nazi Azov Battalion, came to Turkey and will stay in Ankara until the end of the war.

“According to the agreement we made with Erdogan, the five Azov commanders released will be in comfortable conditions in Turkey until the end of the war. They will be able to see their families. I sincerely thank the President.”

The Neo-Nazis, who played an important role in the Maydan coup in Ukraine in 2014, have many armed organizations across the country. The names that came to Turkey with a prisoner exchange are the Azov Battalion, the largest of these neo-Nazi organizations.

What is the Azov Battalion?

The Azov Battalion is the strongest of the Ukrainian neo-Nazi organizations. The founder of the organization, Andrey Biletskiy, who was arrested for blowing up the statue of Lenin in 2011, is one of the country’s leading neo-Nazis. Established by Biletskiy in 2002, the far-right organization named ‘Trizub’, which takes its name from the journal of the same name by Simon Petlyura, one of the far-right historical leaders of Ukraine, is considered the predecessor of the organization we know today as the Azov Battalion.

It is estimated that 35 thousand to 50 thousand Jews were killed in the pogroms organized during the period of Petyura, who was the leader of the Ukrainian People’s Republic, which was declared unilaterally between 1917 and 1921, during the construction of the Bolsheviks’ power in Russia.

The Azov Battalion, which had been a leader in the organization of the extreme right in Ukraine for many years, gained an institutional structure with the Maydan Coup and was attached to the Ministry of Internal Affairs, and neo-Nazism gained a corporate identity in Ukraine. The Azov Battalion is known for its attacks on Russians, communist organizations, and other ethnic minorities in the country.

The Azov Battalion, which has become well-known for its attacks on Donbass after the Maydan coup d’état, particularly for its killings of civilians, is imprisoned in Mariupol, which they have decided is the base region, along with the special operation carried out by Russia.

The Azov militants in Mariupol, who are referred to in the Western media as “Azovstal defenders” or “Azovstal heroes,” have a long history that dates back to the Maydan era. Due to vicious attacks on the populace and anti-Maydan forces, the ultra-nationalists had taken Mariupol.

Denis Prokopenko, one of the Azov leaders in the country, is one of the leaders of the Azov Battalion, which was among the “Azovstal defenders” and later surrendered to the Russian forces. Prokopenko was previously deemed worthy of the country’s highest award, the ‘Hero of Ukraine’, by the Ukrainian leader Zelenskiy. According to The Globe, Prokopenko joined the Azov Battalion in 2014 when it was formed. According to his statements in the Ukrainian press, Prokopenko said that his grandfather “fought against the Soviets” in the Finnish-Russian winter war and explained his anti-Soviet roots with the following words:

“It feels like I’m continuing the same war: the war against the Kremlin’s occupation regime. My grandfather had such a terrible hatred of communism, of Bolshevism…”

‘Linguistics graduate’ Prokopenko, who said he was an ‘English teacher’ before joining the Azov Battalion, was also an active member of the ‘Dynamo Ultras’, the fan group of the Dynamo Kyiv football team, which functions as a human resource for racist organizations such as the Azov Battalion in Ukraine. Although Prokopenko’s pre-2014 background is not well known, it harbors various doubts. According to Life.ru, in a data leak at Ukraine’s Privatbank, it was found that Prokopenko reported that he was “a secondary school graduate” when he applied for a loan.

Dinamo Ultras celebrated Prokopenko’s state medal with the words, “The commander of the legendary regiment, which also represents our tribune, received this highest award for his bravery and effective actions in the defense of the city of Mariupol.” Prokopenko has held special duties, including extrajudicial killings, on the front line as a ‘commander’ in conflicts since 2014. It is also known that Prokopenko was responsible for the famous sniper attacks on Donbass civilians.

Prokopenko surrendered to Russian forces on May 20. The Russian army took Prokopenko out of the city with a special armored vehicle in order to save the people of Mariupol from the lynching attempt.

It is stated that Prokopenko and other Azov leaders brought to Turkey as part of the prisoner exchange will “stay in Turkey until the end of the war”.

Prisoner exchanges are, above all, a matter of bargaining for the implementing parties. And the captives included in the exchange are shaped according to this bargain. However, this does not change the qualifications of the people involved in the exchange. In this respect, although there is no legal problem, there is a big question mark about what will happen in the next process.

Although Turkey follows a ‘balanced’ position in the Ukraine crisis, this balance can often evolve into a zig-zag policy. If this deviation also happens to Azov members in Turkey, get ready to watch the heroic stories of Azovists in the Turkish media. Because the record of the central media in Turkey on Ukraine and the Azov Battalion is not clean. The attitude of the majority of the Turkish media has been shaped except the political scales of the government. In Turkey, the far-right administration in Ukraine, the country’s nationalist history shaped by Nazi collaboration, and structures such as Azov were mostly told as “stories of heroes defending their country.” In this prisoner exchange, the story of the Azovstal Defenders was frequently referenced in the news about those who came to Turkey, instead of Nazism, which formed their identity.