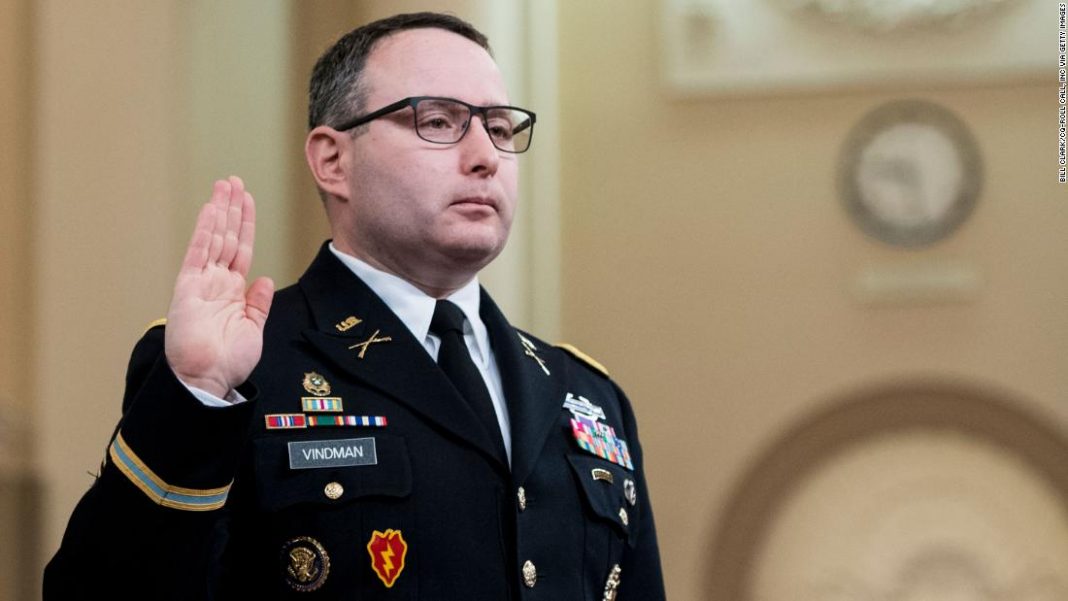 Why does Alexander Vindman want to cancel Elon Musk? Why do all these Ukrainian Jews have become the vehicles of totalitarianism? Why do they shamelessly condone the empowerment of Nazis and Neo-nazis in their (ancestral) homeland, where 1.5 million Jews were exterminated by the Nazis and their Ukrainian collaborators (Stepan Bandera & Co.) during WWII?  Their fathers and grandfathers must be turning in their graves… Answer: For the same reason that they have invited Al Queda to fight in Ukraine… Don’t forget they did the same in Syria to achieve the same goal: “Regime Change”…

Whenever I hear anything about this clown, Alexander Vindman, it automatically comes to my mind what Rush Limbaugh used to say when hearing his name: “..Oh, say can you see…” singing the first line of our National Anthem, to underline Vindman’s empty pomposity and his unparalleled frivolous conviction about “American exceptionalism”…

So let’s put first things first: Mr.Vindman, the fact that you valiantly served in the military does not give you the right to opine ceaselessly about all political and geopolitical matters, as complex as they are.  Judging from your educational background and overall presence (link here), you are a mere intellectual mediocrity: you cannot go that far with simply being an average student of history and Eastern European studies…  But you can excel in the swamp where your fellow “swimmers” have the same or fewer qualifications as you…

But when I hear you demand “Let’s Cancel Elon Musk” (see the news below), I have many more concerns about you, your personality, and your political role. First, in the face of Elon Musk, you are attacking America… Without free speech, America is not America anymore. Then your appearance and attitude remind me of Hitler, Stalin, and other totalitarian demigods. Today you surpassed yourself: You shamelessly want to demolish the American Constitution and reserve the right to free speech only to those who agree with your schizophrenic political positions.

Why schizophrenic? you may ask.  Because ladies and gentlemen, Mr.Vindman, was born in Ukraine, in the Soviet Socialist Republic of Ukraine, in a Ukrainian-Jewish family and should know better.  Let me remind you here that “by coincidence,” many other members of our foreign relations establishment are the offspring of Ukrainian Jewish families.  First among them, Secretary of State Tony Binken, and second, the real secretary of State Victoria (“F… the EU..”) Nuland, who has been in charge of Ukrainian affairs for a decade or more and she is the real power behind the current developments along with her neocon clan, the Kagans…  And last but not least, Zelensky himself, who is also a Ukrainian Jew.

Do you want to be reminded how exactly 1.5 million Jews were “exterminated” in Ukraine during WWII? We do not have time to waste, but please let the U.S. Holocaust Museum explain what happened: You will find out that, in many cases, it was the work of the Nazis and their local collaborators.  Top among these collaborators was Stepan Bandera (thank God KGB executed him in Munich after the war), who is now celebrated officially in Ukraine as a hero!! Yes, My friends, Zelensky, Nuland, Blinken and Vindman, are either allowing such schizophrenic celebrations of their ancestors’ murderer or are collaborating closely with his Neo-Nazi descendants, those who have formed the Azov Battalions and similar organizations… Yes, my friends, Vindman, Neuland and Blinken are supporting Zelensky’s “Democracy,” which has outlawed all opposition parties, all opposition press, and also the Russian language, spoken daily by 50% of Ukrainian (native to 30% of them)!!

We shouldn’t be surprised then we learned recently that these same people had invited Al Queda and other Islamists, and they are paying handsomely (about $15,000 a month) to fight in Ukraine (Please watch Clayton Morris below to learn more)…  Yes, these were the same Islamist beheaders who the late Senator McCain and his “buddy”, bloodthirsty neocon Lindsey Graham, visited and encouraged to cause “regime change” in Syria by beheading any soul on their way.  They had massacred most Antiochian Christians before the Russians stopped them 5 miles outside Damascus.  They turned them back, and they annihilated them until President Trump finally decided to take part in their defeat…

I rest my case…

Alexander Vindman has taken a break from stuffing his piehole to try to incite the Mob to “cancel” Elon Musk.

This is after Elon Musk went off the reservation by displaying a hesitancy about the world sleepwalking into nuclear destruction over a few provinces in the southeast of Ukraine.

After being grievously insulted by the ethnonarcissistic leadership and people of Ukraine, Elon Musk decided he had enough with giving the ingrates free Starlink services so they could prosecute their war.

Some of Ukraine’s elites are apparently having second thoughts about throwing Elon Musk under the bus.

Alexander Vindman was famously removed from the National Security Council by President Trump, after complaining about his America First foreign policy:

WASHINGTON (JTA) — The White House is set to remove Lt. Col. Alexander Vindman, the Jewish staffer who was among the first to raise flags about President Donald Trump’s pressure on Ukraine to investigate a political rival, from the National Security Council.

Trump said on Friday that he was unhappy with Vindman, and two senior White House officials told the New York Times that Vindman would be reassigned to the Pentagon.

Vindman later on led the charge to impeach the nation’s 45th president—apparently the Ukrainian-born Lt. Col. preferred a more Ukraine First foreign policy for the nation:

Lt. Col. Alexander Vindman concluded his opening statement in the third day of public hearings in the impeachment inquiry with an emotional message to his father celebrating the rights and freedoms enjoyed by US citizens.

Vindman came to the US as a child from Ukraine when it was still part of the Soviet Union. In his testimony on Tuesday, the Army lieutenant colonel and National Security Council official applauded his father for deciding to flee Ukraine in the late 1970s and settle the family in the US.

Cancel culture at its worst?