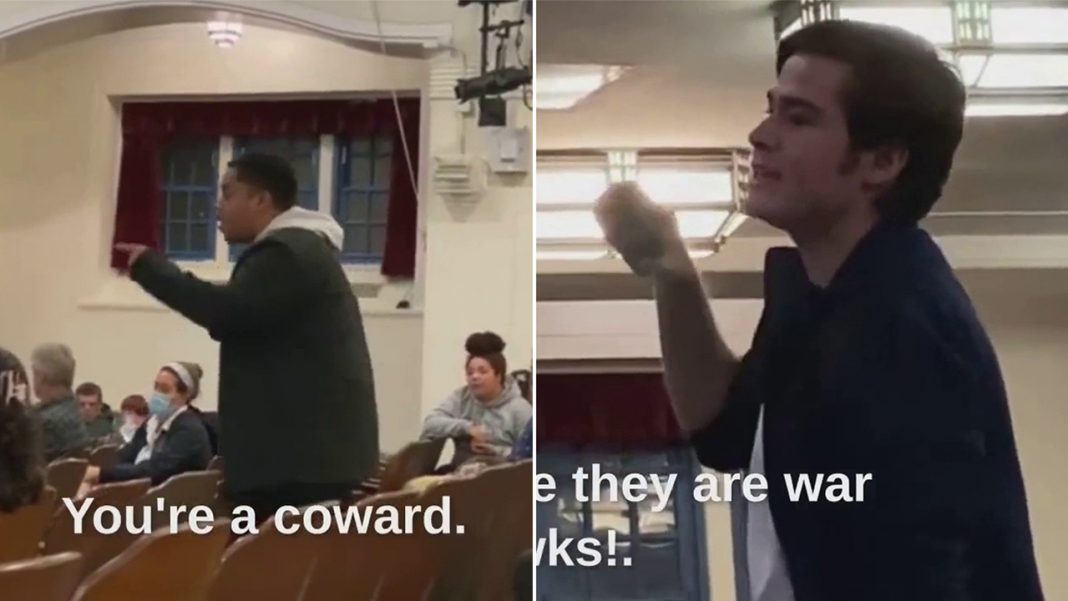 EDITOR’S NOTE: Just a few days we noted that Tulsi Gabbard’s move could be fatal to the Democrats and the DC establishment because of her front-and-center attack against the Ukraine war.  So far, the facts on the ground prove this position correct. Just two days after Tulsi’s statement about leaving the Democrats, her name came up at the confrontation of AOC by her constituents… Enjoy AOC confronted and ridiculed in the video below…

AND BELOW ENJOY TUCKER DEMOLISH HER on this and other issues…

A FULL REPORT ON THE DISASTROUS AOC TOWN HALL BY NY POST….

Far-left Rep. Alexandria Ocasio-Cortez was heckled Wednesday by even farther-left activists who accused her during a town hall event of “voting to start a nuclear war.”

“Congresswoman! None of this matters unless there’s a nuclear war, which you voted to send arms and weapons to Ukraine,” one protester shouted, according to a video posted on Twitter.

The heckler began yelling at Ocasio-Cortez (D-NY) during the Q&A portion of the event, criticizing the Democrat’s support for sending military aid to Ukraine as it attempts to ward off a Russian invasion.

“Tulsi Gabbard, she’s left the Democratic Party because they’re a bunch of war hawks,” the heckler continued. “You ran as an outsider, yet you’ve been voting to start this war in Ukraine. You’re voting to start a third nuclear war with Russia and China. Why are you playing with the lives of American citizens?”

Another heckler is shown in the video calling AOC a “coward” for allegedly sending money to “Ukrainian Nazis.”

“You have done nothing! Tulsi Gabbard has shown guts where you’ve shown cowardice,” the man shrieked, pleading with AOC to “denounce” the Democratic Party like Gabbard did earlier this week.

AOC appeared to respond to the second protester, but her words were not clear in the video posted online.

Ocasio-Cortez voted in favor of sending $40 billion in military and humanitarian aid to Ukraine earlier this year.

A Twitter user named Jose Vega claimed responsibility for the disturbance Wednesday, writing, “My friend @Noggatone and I confronted Congresswoman @AOC on her support for Nuclear War and Ukrainian Nazis. I call her out for being a coward in the face of the party that will push us all into Nuclear war right now. Will she stand up like @TulsiGabbard  and fight for peace?”

Vega’s Twitter account indicates he’s a follower of the late conspiracy theorist Lyndon LaRouche, a perennial candidate for president who died in 2019 at the age of 96.

Ocasio-Cortez’s office did not immediately respond to The Post’s requests for comment.