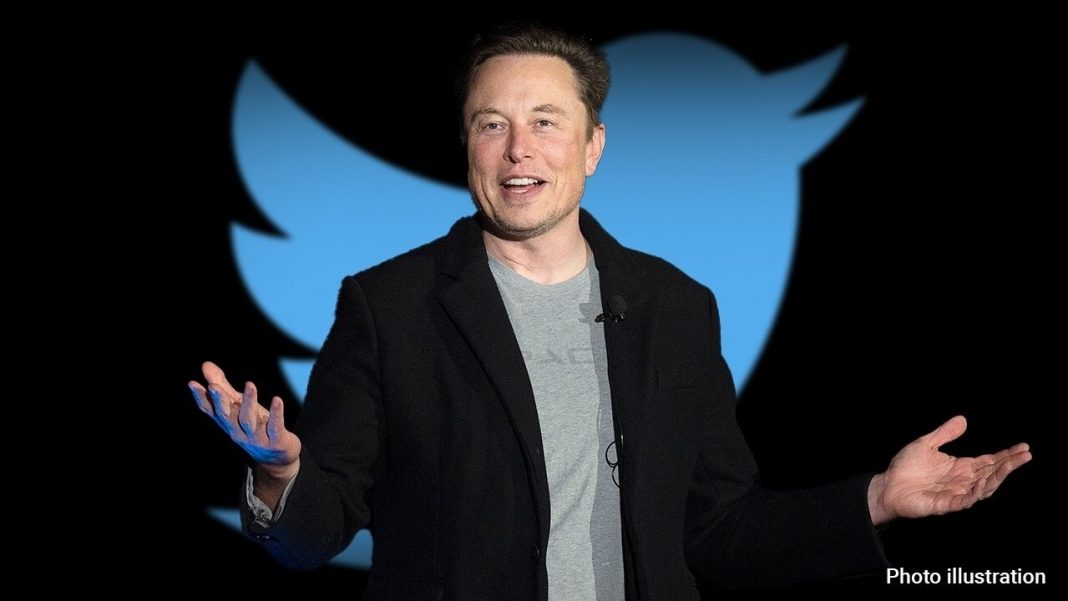 EDITOR’S NOTE: My friends, this is potentially bigger news than the upcoming Red tsunami in the November 8 midterm elections! This is about the heart of American democracy, free speech! Most people analyze free speech in purely ideological terms and do not realize that it is a source of wealth: because free speech means the ability to test and contest ideas in all aspects of life – and this “testing” leads to massive innovation and wealth creation!! America without free speech will turn into a much poorer country sooner than anyone is ready to admit!

Below you can see President Trump’s (cautious) reaction and, following this, Revolver.news (Darren Beattie) analyzes the steps Elon Musk should take to re-instate freedom of speech in Twitter!! 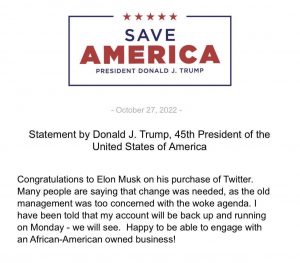 As of today, you are now the proud owner of the world’s most high-profile speech platform. It cost you a pretty penny—$44 billion is higher than the endowment of Yale, the GDP of Latvia, or all of SpaceX’s revenues combined in its entire twenty-year history.

But what you’ve bought isn’t just another tech company. What you’ve bought is power: The power to totally remake the nature of modern public discourse. In a world where constraints on speech grow by the day, inexorably, you have the power to stand in the breach and reverse the course of history—and maybe make a lot of money doing it.

The battle will be long and difficult. But that doesn’t mean you can’t start things off with a bang. Here are Revolver’s seven day one recommendations for what you should do immediately to start making Twitter great again. Much of Twitter’s basic appeal is how democratic it is (or was): world leaders and celebrities use the platform on basically the same footing as ordinary citizens. Ordinary citizens and even faceless anons can tell prominent voices to go f*** themselves… or better yet, actually suck them into an argument and beat them.

But Twitter’s bluecheck system works against this democratic ethos. Originally, it was created simply to verify more famous users of the platform, even controversial ones. But around the rise of Donald Trump, the bluecheck evolved. Twitter became inconsistent about who was “notable” enough to get a checkmark, meaning some relatively prominent voices go checkless while they are casually handed out to many liberal users of no notability whatsoever. Twitter also “punished” certain “naughty” users, like Milo Yiannopoulos and Tommy Robinson, by “deverifying” them and depriving them of their checkmarks.

Thus, the blue checkmark transformed from a practical tool for stopping impersonation to a status symbol, denied or bestowed based on supposed moral worthiness. Those possessing a verified “blue checkmark” on Twitter have evolved into an elite class of yappers, with stereotypical “woke” attitudes to match.

If you want to restore Twitter to greatness, smash this system. The simplest way to do this is to make Twitter verification an automatic process rather than a semi-arbitrary award. Make it so any person who puts in the effort to verify their identity gets a bluecheck. Or better yet, to symbolize this rebirth, trash the old symbol and pick a new one. A new symbol for a new day.

One welcome effect of Alex Berenson’s lawsuit against Twitter is that it revealed previously-secret emails between the White House and Twitter in which the Biden Administration pressured the company to take action against “misinformation.”

In a White House meeting in April 2021, four months before Twitter suspended my account, the company faced “one really tough question about why Alex Berenson hasn’t been kicked off from the platform,” a Twitter employee wrote.

Does anybody think this is the first or only time Twitter received pressure from the federal government to censor? And how about all the pressure that may have come from state and local governments, or foreign ones?

Now, you’re in the position to find out the truth. And an excellent way to show transparency and build trust with the public is to reveal all the hidden censorship activity of the old Twitter. Give the names of all the government, corporate, and journalistic actors demanding censorship behind the scenes. This won’t just earn some goodwill; it will also embarrass the censorship class and rob them of credibility right as they’re about to hit you with a ton of pressure.

Dump the docs as soon as you can—with one caveat. Twitter could, in fact, bring a powerful First Amendment lawsuit against the U.S. government for its pressure tactics, and the only reason it hasn’t already is because Twitter’s old leaders agreed with the pressure. So when you disclose this trove of documents, be sure that your lawyers have reviewed this disclosure to ensure it’s tailored to help, not harm, Twitter’s juicy potential lawsuits against the government.

As much as we has trashed Twitter over the past year, it used to be a great website.

In 2012, then-general manager Tony Wang described Twitter as representing “the free speech wing of the free speech party”… and it was true. Ten years ago, Twitter was a pretty wide-open place. You could call out journalists as the losers they were, and as long as you didn’t dox their home address or threaten them, they pretty much had to sit there and take it!

Our goal is to provide a service that allows you to discover and receive content from sources that interest you as well as to share your content with others. We respect the ownership of the content that users share and each user is responsible for the content he or she provides. Because of these principles, we do not actively monitor and will not censor user content, except in limited circumstances described below.

Now ask yourself: Was 2012 some doomscape of hate crimes and terrorism and “misinformation” destroying “our democracy”? Or was it, for the most part, better than the current situation for speech and public discourse in every way?

We thinks you will agree with us on the answer to that question, so be bold! Pull out Twitter’s old 2012 Terms of Service, and say that henceforth, those will be the rules guiding your management of Twitter.

Should Trump be unbanned? Definitely. But for now, the former president has said he’ll stick to Truth Social. But if you really want to send a message of a new era for Twitter and for speech, you can go much further than just unbanning a single man. Twitter has banned thousands of people over the years, often for brazenly political reasons (70,000 accounts were purged after January 6).

The justification for all these bans will be familiar to you: racism, sexism, white supremacy, Holocaust denial, blah blah blah. But surely you know the truth: there was almost zero censorship just ten years ago. Was the Internet unusable or too “dangerous”? Of course not! Whining about “hate speech” has never been about protecting the week. It has always been about sheltering the powerful and indulging the whiny.

So how about a general jubilee? You could order the company to unban every account shut down for violating Twitter’s speech codes. You could acknowledge that Twitter has banned thousands of people unjustly, but that your new pared-down company doesn’t have the manpower to re-review every single ban, and so a mass amnesty is the most direct way to create the global marketplace of ideas that you want. Let Bronze Age Pervert and Megan Murphy back on, and heck, bring back the Qanon weirdos too.

5. Get rid of the odious fact-checking Does anybody actually like fact checks, or the people who constantly peddle them?

Fact-checking may have started off as a worthy effort to provide some nuts and bolts reporting on factual claims made by politicians, but over they past decade they have evolved into something far more: de facto narrative control and backdoor censorship. It took mere minutes for warped, power-hungry souls to realize that “fact-checking” a claim was the first step to banning it completely. Once the realization was made, the power grab became inevitable. Agree with most foreign countries that mail-in ballots are shady and prone to fraud? Too bad! Twitter’s fact-checking squad deboonked that “lie” and slapped a hostile fact-check tag on the president himself. Think that Ray Epps’s behavior the day before January 6 is at least worth a closer look? Tough luck, the fact-checkers say there is “no evidence” of anything wrong at all.

The public is, in fact, capable of checking (and debating) its own facts, just like it has did for centuries without Twitter’s help. So make it official, and dump the editorializing.

6. Fire the “Trust and Safety Council”

Twitter formed its shadowy “Trust and Safety Council” in early 2016, in order to “ensure that people feel safe expressing themselves on Twitter.” Today, the group has nearly 100 members, all organizations of one form or another. Some branches of the TSC are focused on stopping child pornography or protecting dissidents in crappy far-off countries. Keep those around if you want. But the real heart of “Trust and Safety,” the reason it exists, is the 31-member Online Safety and Harassment Prevention group. The only purpose of this group is deciding which opinions and views should be banned, and with groups like the Anti-Defamation League on the board, the board’s inevitable purpose is to become a perpetual ratchet for more censorship.

So get rid of it. Twitter is perfectly capable of doing exactly what it did in 2015 and before, and policing for actually illegal material without wading into the murky question of playing thought police for ordinary ideas.

7. Personnel is Policy: Elon needs to hire people who are smart, tough, and relentlessly mission aligned.

Of course, after getting rid of the dead-weight and the commissars, Elon will need to replace at least some of them. No matter how great Elon’s free-speech policies might look on paper, they will never be implemented effectively if he doesn’t take personnel seriously. The old saying that “personnel is policy” isn’t just applicable to politics—it will be crucial for Elon to follow if he wants to be successful in this dangerous and bold endeavor, and if he wants to successfully protect himself. It won’t be enough just to hire smart people, he will need people who are tough, courageous, and have a demonstrated capacity to withstand coordinated social, financial, and political pressure. Because make no mistake, the Regime’s backlash is just beginning.