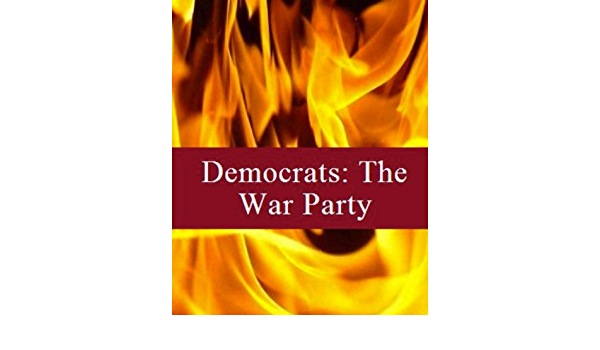 PHOTO: A 2013 book by Tom McVey, available in bookstores for those interested.

A recent quote by Congressman Jamie Raskin, mentioned by Tucker Carlson, sums up how the Democrat Party was always the War Party dating back to WWI.

What did Raskin say? According to Tucker Carlson, Raskin said this:

Well, this week, Congressman Jamie Raskin of Maryland, of Bethesda, answered that question. Russia is an Orthodox Christian country with traditional social values and for that reason, it must be destroyed, no matter what the cost to us.

Democrat President Wilson took the USA to war during WWI for the Globalists in 1917. Yes, the Globalist elites were hard at work since 1776 to destroy the USA within. Wilson was a Globalist.

Guess who declared war in 1941 after Japan bombed Hawaii. It was Democrat President Franklin Roosevelt. The Democrats put all Japanese Americans into concentration camps. It was not the Republicans who did this.

Who took the US to war in Korea? Democrat President Truman in 1950.

Ok, let us investigate Vietnam? JFK sent secret special forces to assist South Vietnam against Communist North Vietnam. It was not our fight.

Democrat President Johnson created the fake Tonkin Gulf incident for the US to go to war against North Vietnam. Johnson held stocks in weapons companies.

The Republican Party, with Bush’s Neocons who are not conservatives, took the USA on foreign disaster wars until Trump came to the scene. The Bush Crime Family is what we call RINOs (Republican in Name Only). Didn’t Democrats in Congress support war in Iraq, Afghanistan, Syria, Libya, etc.?

How can we forget Democrat President Clinton’s massive bombing of Orthodox Christian Serbia in 1999!

Did Trump try to start WWIII? No. Why are the Democrats so bent on destroying a nation that stands for Family, Nation, and God?

As Greek Americans and Greek Orthodox Christians, we need to condemn Archbishop Elpidoforos, the Ecumenical Patriarchate, Archons who support Ukrainian Nazis, and Globalist Elites who want to destroy a fellow Orthodox Christian nation.

The DC Globalist elites pay our church leadership to divide the Russian Orthodox Church in Ukraine.

For example, the common Greek citizen faces high fuel costs, such as 2.50 euros per liter which is $9.00 per gallon. Greeks are paying ten times the electrical costs. Inflation is 11% across Greece. Food costs are high. Greeks face a very cold winter if they don’t have wood stoves.

In a matter of fact, it is time for all Greek Orthodox Christians/Greek Americans to leave the Democrat Party.

Raskin wants to Destroy Russia because it is Russian Orthodox