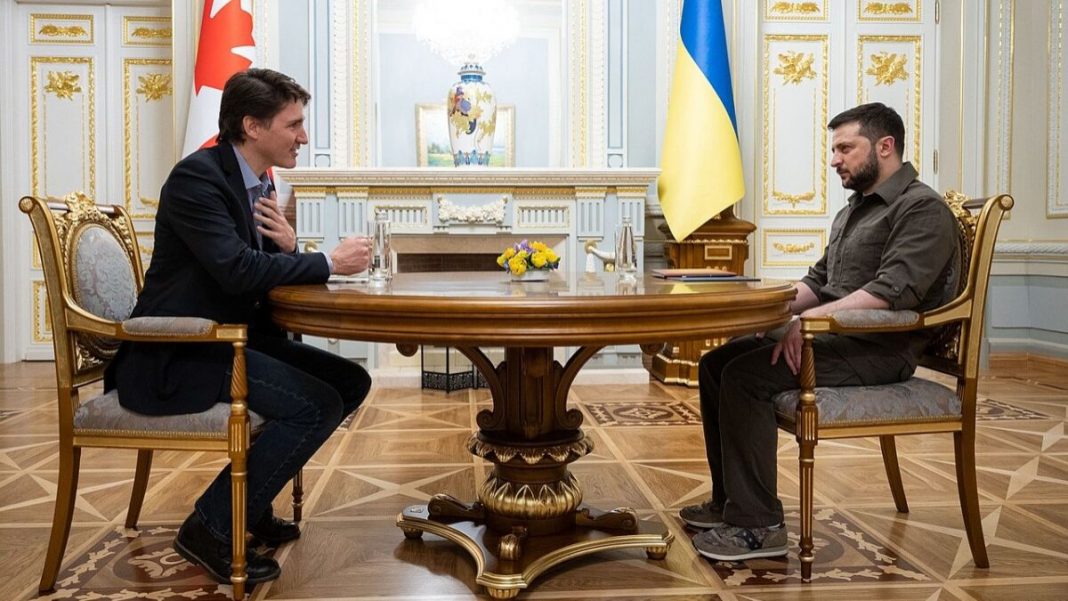 EDITOR’S NOTE (Nick Stamatakis): Those of us who opposed the Ukraine War since the beginning and were called all kinds of names (including “Putin’s pets” and “putinists” and other more hurting names to the effect of “unpatriotic”) are delighted to see an establishment magazine such as “Foreign Policy” post an article admitting they were wrong (see below).  Before this happened, we noticed that for the past few months, all those people – some were friends – who were calling us names had suddenly seen the light and realized their mistake.  At the least, they were appalled at the huge amounts of spending for Ukraine in DC and Europe, and they finally realized what we were saying early on, that the sanctions would backfire.

In recent days, the fact that NSA Director Jake Sullivan is talking to Patruchev and other high-rank officials in Moscow at the same time as the “combined west” is pushing Zelensky to start negotiations has given rise to the hopes that peace negotiations may start.  Other news/factors point in the same direction:

But we cannot be certain that the “hawks” have come to their senses suddenly.  They will have to accept that Russia will demand AT LEAST the following:

What will the exchange be? That 2,000 Russian tanks will not roll on Ukrainian steppes all the way to Romania and Poland, and Hungary.  And even more that Europeans will not freeze.

Frankly, I see a small chance for the crazies leading DC to come to their senses. So, get ready for the Russian tanks to roll west… As they did about 75 years ago when they liberated Berlin…

$66 Billion In, It’s Clear The Realists Were Right About Ukraine

Why were the realist Republicans called Putinists and fascists when they argued for the same thing the Biden administration is doing?

US. National Security Adviser Jake Sullivan has been speaking with high-level Russian officials “to guard against the risk of escalation and keep communications channels open, and not to discuss a settlement of the war in Ukraine,” The Wall Street Journal reports, citing anonymous sources.

It appears the Biden administration has been privately pushing Ukraine to come to the negotiation table, while, bafflingly, providing Ukraine with whatever it wants. On-book U.S. spending on Ukraine’s war is so far about $66.3 billion, the largest foreign government contribution to the war by far.

a calculated attempt to ensure the government in Kyiv maintains the support of other nations facing constituencies wary of fueling a war for many years to come. The discussions illustrate how complex the Biden administration’s position on Ukraine has become, as U.S. officials publicly vow to support Kyiv with massive sums of aid ‘for as long as it takes’ while hoping for a resolution to the conflict that over the past eight months has taken a punishing toll on the world economy and triggered fears of nuclear war.

Consider the stupidity of this strategy. Everyone with an IQ greater than an absent-minded jellyfish knows Ukraine as an independent actor and state wouldn’t even exist without American politicians granting it an open checkbook even during crippling inflation and functionally open borders. But America has to privately beg Ukraine because Washington, D.C., is trapped by its own grandiose rhetoric and foolish decision to give Ukraine billions and advanced weapons. The tail now wags the dog.

No hegemon in human history had to face this ideological trap, not even the Soviet Union with Fidel Castro. Just like Zelensky and his supporters in D.C. today, Castro would have readily dragged Moscow and the world into a nuclear war in 1962. But Moscow had the leash of its satellites, including Cuba, in their hands. America had too, during the Cold War. But the post-Cold War U.S. establishment is not manned by nationalists or realists, and to them, the survival of an “order” is more important than targeted U.S. interests.

That gives rise to scenarios such as Europeans demanding the United States share plans with them when the United States practically dwarves them in aid in a war in their backyard. It’s not just rhetoric but the provision of massive amounts of U.S. cash and weapons, without which the war would have long been over regardless of how well the Ukrainians fought.

Worse, the American government under President Biden spinelessly accepts such sanctimony from foreign governments, ignoring that smaller powers are fanatical about their own survival. The history of the world is lit with examples of smaller states dragging great powers to catastrophic, civilization-ending wars.

There’s one question left unanswered. Why were the realist Republicans called Putinists and fascists when they argued for the same thing the Biden administration is currently doing?

Elon Musk was recently called a Russian agent on Twitter for arguing for peace negotiations, as were David Sacks and Dan Caldwell. The Republicans who voted against further U.S. spending on Ukraine or against the expansion of the North Atlantic Treaty Organization are still regularly derided as extremists for their bold stand with the majority of Americans who don’t want to shoulder the overwhelming burden of a failed internationalism.

In a paper during the early days of the war, I argued we should talk to Russia and reach equilibrium quickly because the asymmetry of interest over Ukraine is stark. Moscow has much more interest in her own backyard than America does. Others argued in Politico that our rhetoric and provision of materiel risks trapping us into an escalatory spiral, a sentiment shared in Foreign Affairs.

“Without a strong United States, there won’t be peace,” explained Hungarian Minister of Justice Judit Varga in a recent conversation we had. “It is only Russia and the United States who could hammer out a solution for the long term. The Democrat [Congressional Progressive Caucus] letter didn’t work out, and it was expected they won’t be for peace. If we had President Trump and Angela Merkel, the war wouldn’t have happened or would have been a localized conflict.”

But that is not possible because the media and academia’s “opinion hegemony” is determined to push a leftist social revolution, even at the cost of a great-power war. This is the key issue.

Those who seek to fight fascism in Europe are the same ones who claim Republicans who opposed uncontrolled aid to Ukraine and instead want to fund the southern border are fascists. To this ideological echo chamber, there is no difference between Donald Trump, Florida Gov. Ron DeSantis, Missouri Sen. Josh Hawley, Musk, Putin, and Hungarian President Viktor Orban. It is one whole global crusade.

A nation-building process that started in Iraq and Libya is headed to Ukraine and will eventually head home. Anyone who opposes this leftist crusade will be termed enemies of progress and fascists.

Dr. Sumantra Maitra is a national-security fellow at The Center for the National Interest; a non-resident fellow at the James G Martin Center; and an elected early career historian member at the Royal Historical Society. He is a senior contributor to The Federalist, and can be reached on Twitter @MrMaitra.