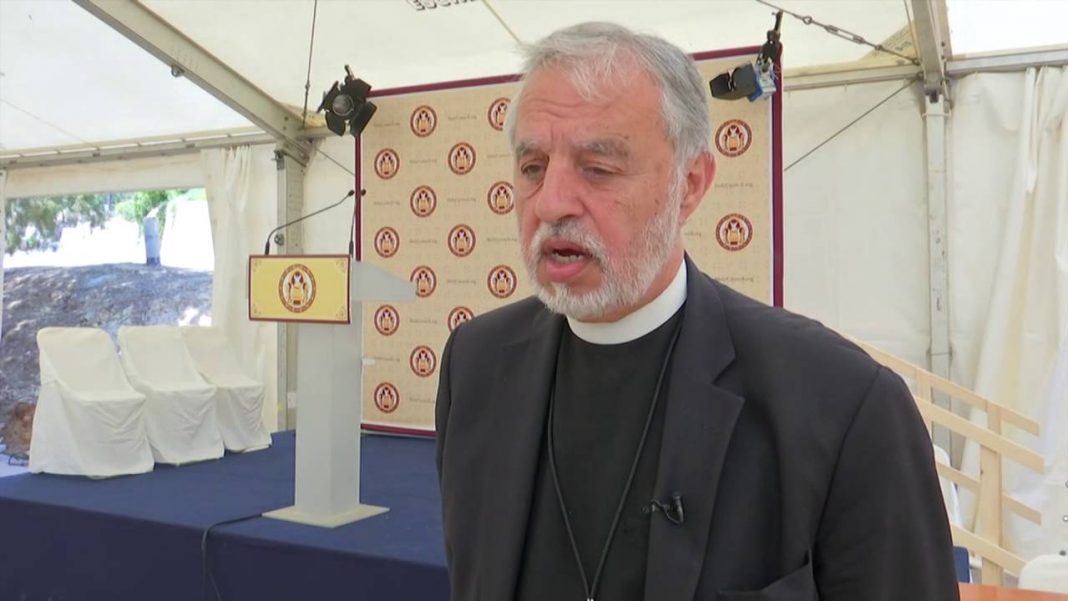 EDITOR’S NOTE (Nick Stamatakis): In the last 48 hours we became witnesses of one more stop of the downhill slide of the “GOA Titanic”.  This time it was extremely painful for all – and especially the clergy – to read the letter issued by the supreme hypocrite Karloutsos, teaching all of us a lesson about humility and selflessness, and “the vanity of life”, while he himself did nothing else throughout the tumultuous last three decades than pursue his personal interest in money and power… And so Karloutsos and Elpidophoros push essentially all Metropolitans and Bishops (along with some clergy) to retirement in a huge power grab in the diminishing Church  – where only about 10% of Greek-Americans continue to attend… (You can read this monumental example of hypocrisy here – preferably with an empty stomach….KARLOUTSOS’ LETTER AND ATTACHMENTS)…

The only one who is not contemplating retirement despite his age is Karloutsos himself… The “vanity of life” does not touch him even remotely in his pursuit of more and more power… Until the federal investigators hopefully turn the tables on him and write the ungraceful end, fitting a life-long career filled with colossal arrogance…

Abp. Elpidophoros Declares War on the Metropolitans and Clergy

Archbishop Elpidophoros has officially declared that the dedicated and faithful clergy serving in the GOA have become a major liability not worthy of receiving any future investment by the Archdiocese.

Yesterday, the Archbishop issued a public statement essentially forcing the clergy of the Archdiocesan Benefits Committee to eliminate the current Pension Program for the sake of something more financially viable for the GOA. His Eminence’s position on this matter is quite clear. The financial welfare of the clergy is a liability to the Archdiocese and His Eminence cannot continue to support them.

Why does His Eminence refuse to support the Clergy Pension Program?

The answer is rather simple. It would require His Eminence to make cuts to the Archdiocesan budget; something that His Eminence seems unwilling to do.

At this moment in time, it has become imperative for everyone (clergy and laymen) to get on the same page about the proposed changes happening in the Greek Orthodox Archdiocese of America. The Archdiocese is about to undergo a significant turning point. This is a turning point that will either bring the faithful together or destroy what little we have remaining as an Archdiocese.

The Archbishop wants to persuade the faithful that the direction and outcome seem inevitable, that this is a difficult choice that must be made. But have all the options been considered? The clergy have barely been given enough information to examine this rushed decision, but that is only because our Metropolitans have gone silent and refuse to publicly support them.  The end result of their silence is the Metropolitans have permitted Archbishop Elpidophoros and Father Alex Karloutsos to run wild, like little children, with misplaced priorities, destroying everything we have spent generations to build and work towards.

Just examine the actions that have transpired this past week.

According to Archbishop Elpidophoros, the Shrine in New York is more worthy of receiving an investment than our clergy.

This has caused Clergy Syndesmos meetings to be called in almost every Metropolis. The clergy have been discussing at length at how upset and angry they are with Archbishop Elpidophoros and Father Alex Karloutsos. There have even been discussions of a class-action lawsuit if this proposed change goes into effect.

The clergy are being asked to sacrifice their family’s future financial stability in order for Archbishop Elpidophoros to make a claim at the upcoming virtual Clergy-Laity that His Eminence removed all the liabilities from the GOA.

But what the Archbishop is unwilling to recognize is that there is currently enough funds in the pension program to last about 9 years, if that.  That means any clergyman 56 years of age or younger, who has put 20+ years of service in, will have to start their retirement fund over again, starting at $0 dollars, because the Archbishop considers investing in those clergymen to be a liability to the GOA.

It is doubtful that Archbishop Elpidophoros and his henchmen have considered what will happen when the Archbishop Benefits Committee rejects their plan, because that will likely be the case.

And where have the Metropolitans been during all this? Why are they not publicly defending their clergymen? Why are they not standing up against this injustice and say we cannot treat our clergymen like this? How are they going to advocate for future young men to pursue the priesthood vocation knowing that their families will not be taken care of after decades of dedicated service to the Church?

By staying silent, our Metropolitans have given their blessings for the wolves to go after the clergymen. And let us be absolutely clear about who the wolves are in this unfolding situation. The wolves are Archbishop Elpidophoros, Father Alex Karloutsos, Elaine Allen and Lou Kircos.

The Metropolitans have become like dead-beat dads, unwilling to provide for their children.

But that may all change very soon.

Yesterday, the Vicar General of the Archdiocese, Father Alex Karloutsos, wrote a letter that provided a glimpse into the direction Archbishop Elpidophoros will be pursing in the near future. It has been extensively rumored over the past year that the Metropolitans will be forced into retirement. And now, we have an idea of how it is going to happen.

There are two resolutions that we will likely see introduced at the virtual Clergy-Laity Assembly in September. You can read more about them here. The first resolution would establish a mandatory retirement age for every clergyman of the GOA at the age of 75. For those clergymen currently exceeding that age and still serving in active ministry, they would be grandfathered into the resolution to still be permitted to serve for two more years of active ministry. After which, they would be required to retire.

Let us examine how this resolution would impact the current Metropolitans of the Eparchial Synod if it were to be approved at the upcoming Clergy-Laity Assembly in September.

First, under the guidelines, the first Metropolitan to retire would be on:

Next, the active Metropolitans over the age of 75, who will still be permitted to serve until September 2022, include:

They would each be given two more years of service under the resolution and be forced to retire in September of 2022.

Through this resolution alone, there are four active Metropolitans that would be forced into retirement over the next two years.

However, there is a second resolution that the Archbishop is planning to introduce at Clergy-Laity that would force all the Metropolitans AND Auxiliary Bishops to retire immediately.

This second resolution involves eliminating the separate retirement plan for all our hierarchs in the Archdiocese of America. Under the bishop’s retirement plan, the Metropolitans and Auxiliary Bishops will receive a retirement benefit of 80% of their salary (inclusive of the 23.4% of their annual earnings paid out through the GOA Pension Program). The proposed change would require two things to happen, if approved at Clergy-Laity:

1) Once approved, the Archdiocese will terminate and cancel all obligations under the Bishop’s Plan after 30 days of going into effect. As a result, there will be one, singular and exclusive plan for all ranks of the priesthood.

If the Clergy-Laity approves this resolution, the Bishop’s plan and obligations of it will cease to exist after 30 days it is approved, which would be around October 10th, 2020.

In order for all the Bishops to receive 80% of the salary retirement benefit, they must submit a written resignation letter to the Ecumenical Patriarch by October 10, 2020, again, if the resolution is approved.

This resolution almost guarantees that four Metropolitans (Methodios, Isaiah, Alexios and Gerasimos) and one auxiliary bishop (Sebastian) will be retiring by October 10, 2020.

Let us quickly examine what would happen for the others that may not chose to submit a resignation letter.

Specifically, the previously discussed issue involving the significant changes being made to the Clergy Pension program would now directly impact all the hierarchs.

There might barely be enough money to cover Metropolitan Nicholas if he retires at 75, but you can certainly count everyone under him to not have any access to the pension funds if they wait till 75 to retire.

Certainly, by the time Metropolitans Savas and Evangelos retire at the age of 75, the current projection is there will likely be no money remaining for their retirements because Archbishop Elpidophoros considers them along with their clergy to be a liability to the Archdiocese.

If the Archbishop gets his way, Metropolitans Savas of Pittsburgh, Evangelos of New Jersey and Nathanael of Chicago would have to switch to the 403(b) Retirement Plan, which would only be funded by their direct contributions. It is a little too late for Metropolitans Savas and Evangelos to get started on that given how close he is the age of retirement. Metropolitan Nathanael would have 25 years to build his 403(b), but that will be taxable income when he withdraws it.

However, if all the Metropolitans retire by October 10, 2020, including Metropolitan Nathanael, they will be guaranteed 80% of their salary each year until they die. From a financial perspective, it makes sense for the Metropolitans to retire immediately. They, of course, can continue to find other lay jobs for supplemental income.

Father Alex Karloutsos and Archbishop Elpidophoros know that this is too big of a loss for our Metropolitans if they reject it, especially given the uncertainty of the current Pension Program. So, by moving forward with this resolution at Clergy-Laity, they are hoping that all the Metropolitans and Auxiliary Bishops will take an early retirement. This will allow Archbishop Elpidophoros to elect all new Auxiliary Bishops that will serve directly under him.

Forget having Metropolitans. That system will be eliminated from our Charter. We will likely be reverting back to the older model.

So, what good did it do for our Metropolitans to stay quiet and bend to the will of Archbishop Elpidophoros and Father Alex Karloutsos? In the end their collective silence ensured that they all would be out of a job on October 10th, 2020, unless they go against the Archbishop and fight this at Clergy-Laity.