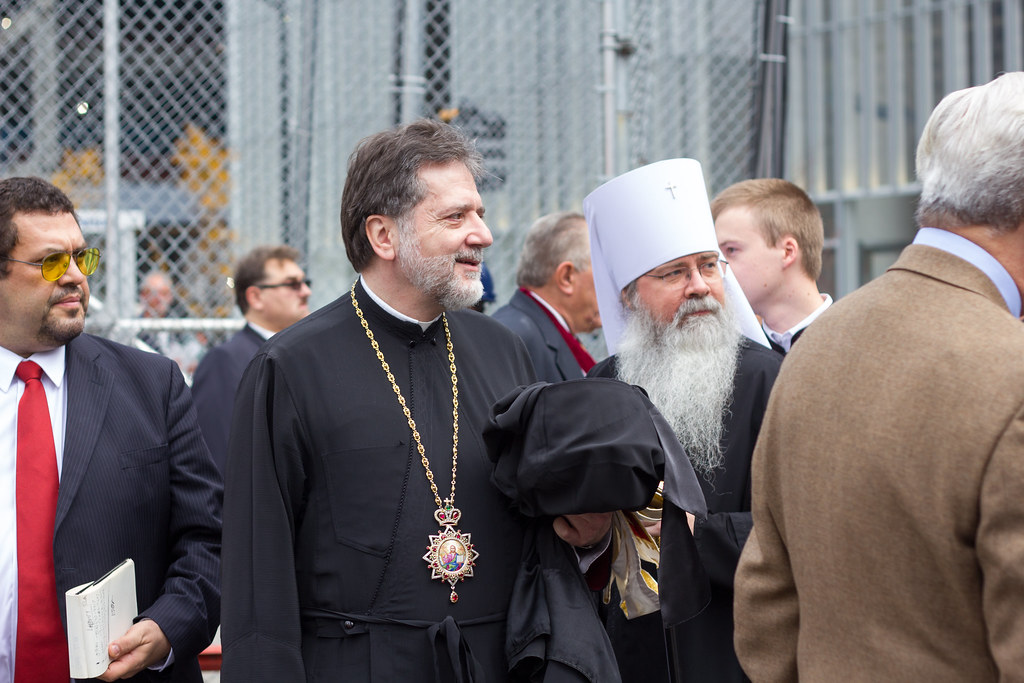 On Monday, we had noted the courageous stance that Metropolitan Nicholas had showed in deciding to talk openly about past and present corruption in the GOA… But we also reported that efforts were made to force him to retract his statements – recorded in a video that we were able to save and make public. “Higher powers” had forced the parish to pull out the original video posted on their Facebook page within hours after its posting…

Today, we just received a photo of a letter signed by Metropolitan Nicholas on February 19, that shows a partial retraction of his statement.  Unverified sources reported to us that Met. Nicholas was ordered by “the Prince of Darkness” (Fr. Karloutsos) to write one of two letters, either one apologizing and saying he made a mistake, or a resignation letter submitted and effective  immediately.  Whatever the case may have been, here is what we observed by reading the letter (transcribed at the bottom):

One can easily see that this is a partial retraction that does not take away most the heavy criticism Metropolitan Nicholas expressed against corruption in GOA – but limits it to the past.  Its factual part  focuses mostly on the financing of the Metropolis’s participation in the Patriarchal visit. Suddenly, some wealthy donors will now “foot the bill” – if we believe that the offer is genuine… In reality, the only reason of the Patriarchal visit will be for Patriarch Bartholomew to “strongarm” the eight Metropolitans to accept their reduction again to “Bishop status”…  This is why Bartholomew wants all of them to follow him for the whole duration of his 10-day trip: One day he will plead with them and the next he will threaten in old Byzantine/Turkish style… One day he will promise and bribe in every conceivable way, and the next day he will issue Turkish “fermans” (mandates)… Our sources have verified that such a decision (to reduce the Metropolitans to Bishops) has already been made at the “Holy Synod” but kept secret, for the fear of a revolt.  A revolt is very likely to happen in the end – but the Phanar will be very surprised by the timing and the location of the eruption… As well by the widespread rise of the faithful against its brutal and senseless authoritarianism…

The letter also says that Met.Nicholas “knows of no continuing or current wrongful practices regarding the finances of our Archdiocese”… But when the same people responsible for the wrongdoing (Fr. Karloutsos) are still in charge for building St.Nicholas, the same people who are currently under federal criminal investigation, then we don’t need to wonder whether this letter is genuine or not…

You do not need to be a linguist and a speech-writing specialist (as the undersigned certainly is) to be able to see that this is NOT a genuine letter of regret. This letter has all the signs of a dictated letter, forced by a superior power.  Similar prose we encounter in authoritarian regimes, where the “subjects” are forced to express their “love” to the “leader”.  Frankly, by reading it we are reminded of letters to “our father Stalin” in the Soviet Union, the “adoration letters” to Mao Zedong of Communist China during the “Cultural Revolution”,  and even more recently “loving” letters to North Korea’s Kim Yong Un.  But in our case we don’t need to go far: We are dealing with quintessential Phanariots who happened to have flourished under Ottoman rule – and still today show tremendous respect for their “Sultan” Erdogan.  We are foolish to expect that Phanariots – hated in the Balkans and especially in Romania – will ever learn how to behave in a modern democratic society.  They will always be a “foreign body” in America, until the “organism of our Church” rejects them once and for all… When any authority “puts a gun” on Met.Nicholas’ head to write this despicable letter, it verifies for all of us that they need to be kicked out of here as soon as possible.

Below you can read a transcription of the letter, dated February 19, 2020:

On Sunday, February 16th, 2020, I visited one of my parishes, Assumption Greek Orthodox Church in St.Clair Shores, Michigan. As is my custom, I responded to questions from the congregation. In my response, I believe that I made two factual errors and I would like to set the record straight. I referenced certain costs associated with the forthcoming Patriarchal visit, that I believed were to be incurred by the Metropolis of Detroit. I have since learned that those costs have been reduced substantially, in large measure out of respect for the Ecumenical Patriarch, and that loving benefactors of our Archdiocese and Ecumenical Patriarchate will graciously cover these costs.  Additionally, when asked about the costs and status of St.Nicholas National Shrine, I incorrectly stated that $23 million in change orders have been executed.  The correct number is $18 million. Furthermore, I know of no continuing or current wrongful practices regarding the finances of our Archdiocese. I apologize for any confusion that may have resulted.

Your Eminence, you have ushered in a new era of fiscal responsibility, transparency and genuine hope for our Archdiocese.  In every way, from the reconstituting of the work on the St.Nicholas National Shrine, support of Hellenic College/Holy Cross, concerns for the welfare of the priests of the Archdiocese, and the renewed financial stability of the Archdiocese, Your Eminence has shown leadership that can only be given through the gifts of the Holy Spirit.

My conversations with my faithful share that same spirit of responsibility, transparency and hope. My goal is to assure them with as much information as possible that our beloved Archdiocese has turned a corner and is on a better path. I apologize for any words that have been, are being or will be misconstrued.

I am grateful that during my recovery from colon cancer, Your Eminence took time out of your extraordinary busy schedule to visit me. I was diagnosed in May of 2019 with cancer, underwent surgery in October, and for the past eight months have undergone chemotherapy.  I am currently in full remission. I am grateful for Your Eminence’s brotherly concern for my health and well-being. My oncologist has insisted during this whole time that I stay away from public speaking as I recover fully from the effects of chemotherapy. I regret not following that advice precisely.

With Deepest Respect and Love,

A PHOTO OF THE LETTER 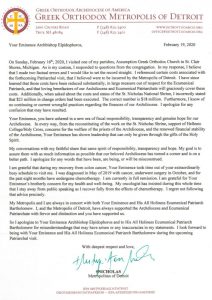