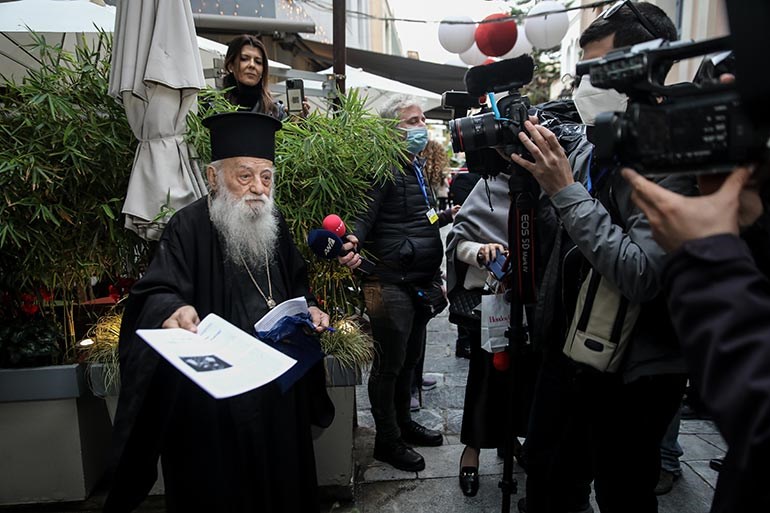 EDITOR’S NOTE (Nick Stamatakis): An over 90-yr old priest saved the honor of Greek Orthodoxy and Hellenism by loudly protesting against the visit of the supreme globalist Pope Francis in Greece where he was received with the highest honors by the political and religious leadership.  The Greek Police acting in a disgusting way (VIDEO BELOW)  remOved the old priest – who said not one inappropriate word and was reading his orthodox positions to whoever would listen, as the Pope was entering the Archdiocese of Greece headquarters.  The Pope spent most of his speeches in promoting the “rights of the migrants” totally disregarding the rights of the locals who are bound to become a minority in the land they inhabited for thousands of years!…

For one more time the Vatican finds a way to undermine Hellenism and shamelessly promotes foreign globalist interests in the land of our fathers and grandfathers.  Yes, Pope Francis apologized to the Archbishop of Greece for the “mistakes” the Catholics have done over the centuries but not so publicly as Pope John Paul II had done during his visit to Athens in 2001.  What “mistakes”? The Crusades devastated Greek lands much more savagely than they did the Middle East – and that’s a reason why the Crusaders are equally hated by Greeks and Arabs (and it is one of the main reasons they are united in their anti-Catholic identity).  Not to mention the Vatican’s “modern mistakes”, the blessings to the Fascists and Nazis who dealt a huge blow to Greece during WW II and caused the death of hundreds of thousands and destruction of Greece beyond description.  The Pope has no business dealing with Hellenism – his latest actions prove that the “apologies” have no meaning!…

To be fair, the Metropolitan of Piraeus Seraphim also issued a Sunday sermon almost 100% dedicated against the heresies of Papism.  On the other side, Arch. Ieronymos a few days ago emphasized the need for the Church “to transmit to the young generations the spirit of 1821 without nationalist extremism“!!  While there are so many dangers and threats in the horizon, the Archbishop of Greece is worried about nationalist extremism… Shameful…

No matter how much Bartholomew and Elpidoktonos try, Hellenism and Orthodoxy will never forget the heretic and criminal legacy of the Vatican. There are many practical ways the Pope could have helped and I will name only one: By convincing Germany – where he always had a big influence – to finally give remunerations to Greece for the many crimes the Nazis committed during WWII.

The Pope did help Israel and the Jews on that issue, didn’t he? Yes, my friends, historical evidence is now 100% clear: the Vatican had stayed silent during Holocaust although the Pope knew of the German crimes (here is the historical evidence by none other than the “Smithsonian Magazine”!!). But later the Vatican helped Israel to get what it deserved.  Why then not help Greece? Because the Vatican never truly felt any remorse and they never changed their views when it came to Greece and Orthodoxy.  (And I am not going to even mention his non-existent support on the Cyprus problem: Pope Francis did not utter one word on the issue during his visit to Cyprus last week!) Of course, our always slavish leadership never demanded what was rightfully ours…

‘Pope, you are a heretic!’: Elderly Greek Orthodox priest heckles Francis in Athens

A Greek Orthodox priest on Saturday shouted, “Pope, you are a heretic!” at Francis in Athens.

A man with a long white beard wearing black robes and a black hat was taken away by police after shouting at the Pope as he was entering the Orthodox Archbishopric.

Video of the episode shared by the Vatican press pool shows the protester, an elderly Greek Orthodox priest, shouting “Pope, you are a heretic!” in Greek three times.

The man is then seen falling to the ground. Uniformed officers and others helped him get up and led him away. His identity wasn’t released.

Francis appeared not to notice the incident, which occurred as he walked into his private meeting with the archbishop.

For centuries the relationship between Roman Catholic and Eastern Orthodox Christians has remained delicate. The two sides split over ecclesiastical differences in an episode known as The Great Schism of 1054.

Francis arrived in Greece on Saturday for a three-day visit. Two decades ago, Pope St. John Paul II became the first pope to visit Greece in over 1,200 years.

According to Vatican News, the meeting between both Christian leaders went smoothly.

They “greeted each other warmly at the Orthodox Archbishopric in Athens,” and Ieronymos offered an introductory address expressing “feelings of brotherhood and honor” in welcoming the pope to the seat of the Church of Athens.

Francis expressed gratitude for the warm welcome, and used the occasion to “ask anew for the forgiveness of God and of our brothers and sisters for the mistakes committed by many Catholics,” he said referring to past actions that have led to divisions among Christians.

Ieronymos told Francis that he agrees with the pontiff’s vision that both sides should join forces to face global challenges such as the migration crisis and climate change.

“Together we must shake the rocks and the walls against the intransigence of the powerful of the Earth,” he said.